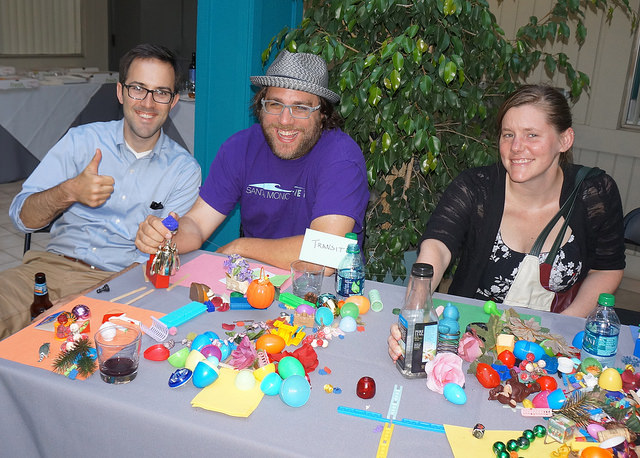 To plan for the future of our city, we must first rediscover our personal pasts. That is the philosophy underlying the “Place It!” workshops, run by artist and urban planner James Rojas, which invite participants to plan the future through play.

Last week, Santa Monica Next hosted Rojas for an event called “Santa Monica 2030,” at which he guided participants through a new process for planning a city’s future, a process which began with everyone first plumbing the depths of their favorite childhood memories.

The group gathered in an outdoor courtyard only a few dozen feet from the future Downtown Santa Monica Expo light rail site.

The event began with Rojas pointing out that, at most planning meetings, people are asked to think about their cities in very abstract ways: number of housing units, square-footage of office space, parking requirements, etc. But, that’s not how people experience spaces.

“These are the less tangible, but no less integral, elements that transform mere infrastructure into place,” he said.

The outdoor courtyard where participants had gathered was, in Rojas’ words, “transformed into a creative, craft space with tables, chairs, and thousands of found objects.”

Before participants could begin thinking about their vision for the future of Santa Monica, Rojas instructed them to use the objects on the tables in front of them to construct their favorite childhood memory.

Several people built memories of family vacations in Venice and Santa Monica. Others talked about exploring the old-growth forest behind their childhood home on the east coast, riding bikes through the narrow streets of Koreatown in the 1990s, summers spent playing around an enormous tree in the courtyard of an apartment complex.

“Most of the childhood memories occurred outside the home in playgrounds and yards, on sidewalks and streets, and in natural settings,” Rojas noted, dividing the memories into three major categories: physical activity, social interaction, and problem solving.

“There is something playful and childlike in Santa Monica that captures the body and mind of the young and young at heart,” he said. “The geography and landscape of cities rarely sustain people interests through out their lives like Santa Monica’s sun, water, and palm trees.”

Rojas then handed out topics to the different tables. The categories were broad, leaving ample room for interpretation: water, transit, housing, and biking.

For housing, participants imagined a future where people lived around communal open space, offering an antidote to the isolation of the fenced-off front lawns of typical suburban housing. The water team illustrated the current state of inequity in our region’s distribution of the precious resource, pointing out that some communities would create barriers for others to have access to water.

The transit team offered a unique vision of a city with a robust gondola network interconnected to a bus and bike route system while the biking team built a shared street, complete with a protected bikeway, dedicated transit lanes, safe and comfortable places to walk, and a place for motor vehicles, as well. Their vision also included destinations — homes and places to shop and work — easily accessible from the shared street.

“We live in a world in which people’s experiences are characterized by race, class, gender, profession, language, and other categories,” Rojas said. “‘Place It!’ workshops create a space where participants are comfortable expressing themselves. By working together, and through conversations along the way, differences are peeled away to reveal shared values. When we respect these, we facilitate consensus.”