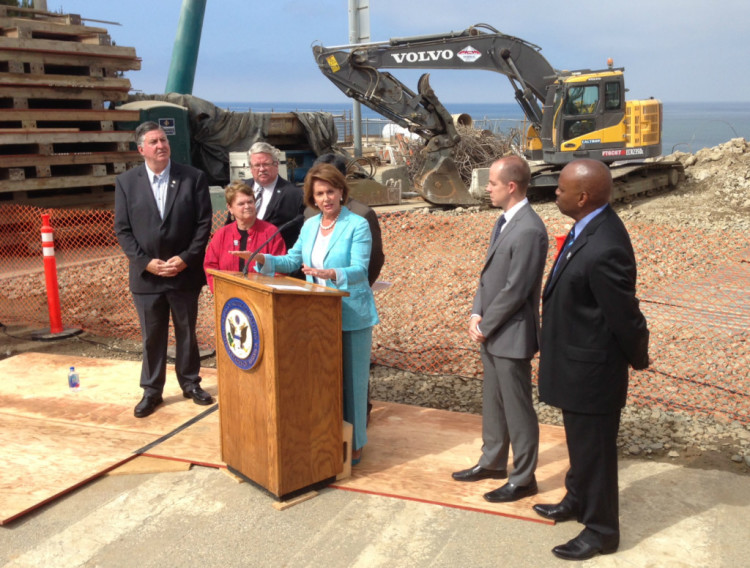 This has resulted in ongoing debates over how to pay for transportation infrastructure. The Grow America Act is President Obama’s proposal, favored by Democrats. Grow America would pay for six years of federal transportation funding by closing loopholes that allow American corporations to skirt taxes on overseas profits. Republicans are less interested in trimming corporate profits, and more inclined to fund transportation by trimming pensions. Today, Pelosi characterized the plan to trim pension funding as “a non-starter” and, in response to questions, expressed her support for raising the gas tax, though that too is likely a non-starter.

Though Lieu and Pelosi are pressing for the 6-year Grow America Act, this week the House of Representatives passed its stopgap 5-month measure that keeps federal transportation funds solvent through December 2015. Senate committees are hammering out their likely-longer-term versions.

CEO Washington and Mayor McKeown stressed that short term funding is not enough for local cities and agencies that actually plan and build multi-year projects, such as subways. Metro’s CEO compared transportation infrastructure to a “three-legged stool” supported by local taxes, private investment, and federal monies. Washington asserted that the first two legs are solid, especially with numerous local transportation taxes successfully passed by voters. Washington went on to characterize federal funding as the “wobbly and weak” leg of the stool. Washington concluded his remarks calling on Congress to fund “nation building” here in the United States.

To follow the convoluted politics of federal transportation reauthorization, read the extensive coverage at Streetsblog USA.