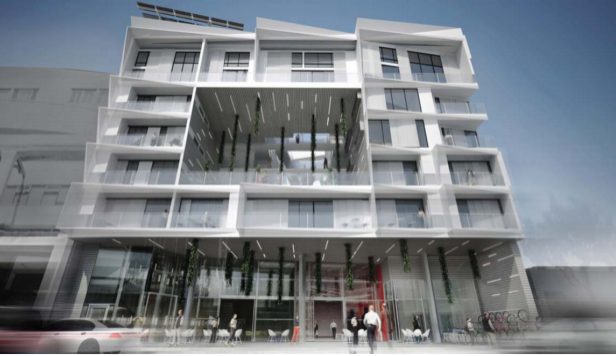 Another moderate-sized mixed-use housing project is wending its way through Santa Monica’s development agreement (DA) process this week, stopping at the Planning Commission on Wednesday for consideration.

The 64-unit (six-story) apartment building with ground floor retail — proposed at 1451 5th Street in Downtown Santa Monica — would replace a surface parking lot and two-story commercial/office with 64 apartments while offering nearly $1 million in fees to the city for transit improvements, parks, early childhood education, and other community benefits, including 13 units set aside to be rented at below-market rents.

Because the project is 84 feet, the developer is required to seek a DA, which allows the city to negotiate for significant benefits in exchange for approving the proposed plans. Under the city’s zoning, the developer could build a smaller project and the council wouldn’t be able to require inclusion of community benefits or affordable housing.

The project, according to the staff report, includes:

Development agreements also give the council discretion to require that the new project be at the cutting edge of sustainable development.

The DA would require the project to be designed with many sustainable features in order to achieve, at a minimum, U.S. Green Building Council LEED “Platinum” certification.

The DA would require the developer install photovoltaic panels on the roof deck, according to the staff report. The building must also be designed to use 15 percent less energy than required by California Energy Code. The DA also includes requirements for a Transportation Demand Management (TDM) Plan, including transportation allowances for employees and residents equivalent to 100 percent of the cost of a monthly regional transit pass, unbundled parking, parking cash-out, showers and lockers for commercial employees who bike to work, ground-level short-term visitor bike parking, and long-term residential and commercial bike parking.

And then there’s the water issue. Apartment buildings and other multi-family housing are already more water-efficient than single-family homes, but through the DA, the council can require the new building to go above and beyond normal levels of water efficiency.

In this case, the city is requiring that the new project’s future indoor and outdoor water usage be below what is required by CALGreen’s building code.

On top of that, the developer will pay $300,000 to the city for water conservation programs.

The dire need for more housing

Along with the 13 affordable housing units, this project will add an additional 51 new apartments at market-rate rents to Santa Monica’s artificially constricted housing supply at a time when the city, the region, and the state is facing a dire housing shortage that continues to drive rents to historically high levels.

After a recent 4-to-3 vote by the City Council to limit housing options on major commercial boulevards like Wilshire and Santa Monica, Downtown Santa Monica remains one of the few places left in the city where developers could propose projects that would require DA approval and therefore allow for negotiation of community benefit packages.

Should this project eventually be approved by the city council, it will contribute, albeit modestly, to a slowly growing housing supply.