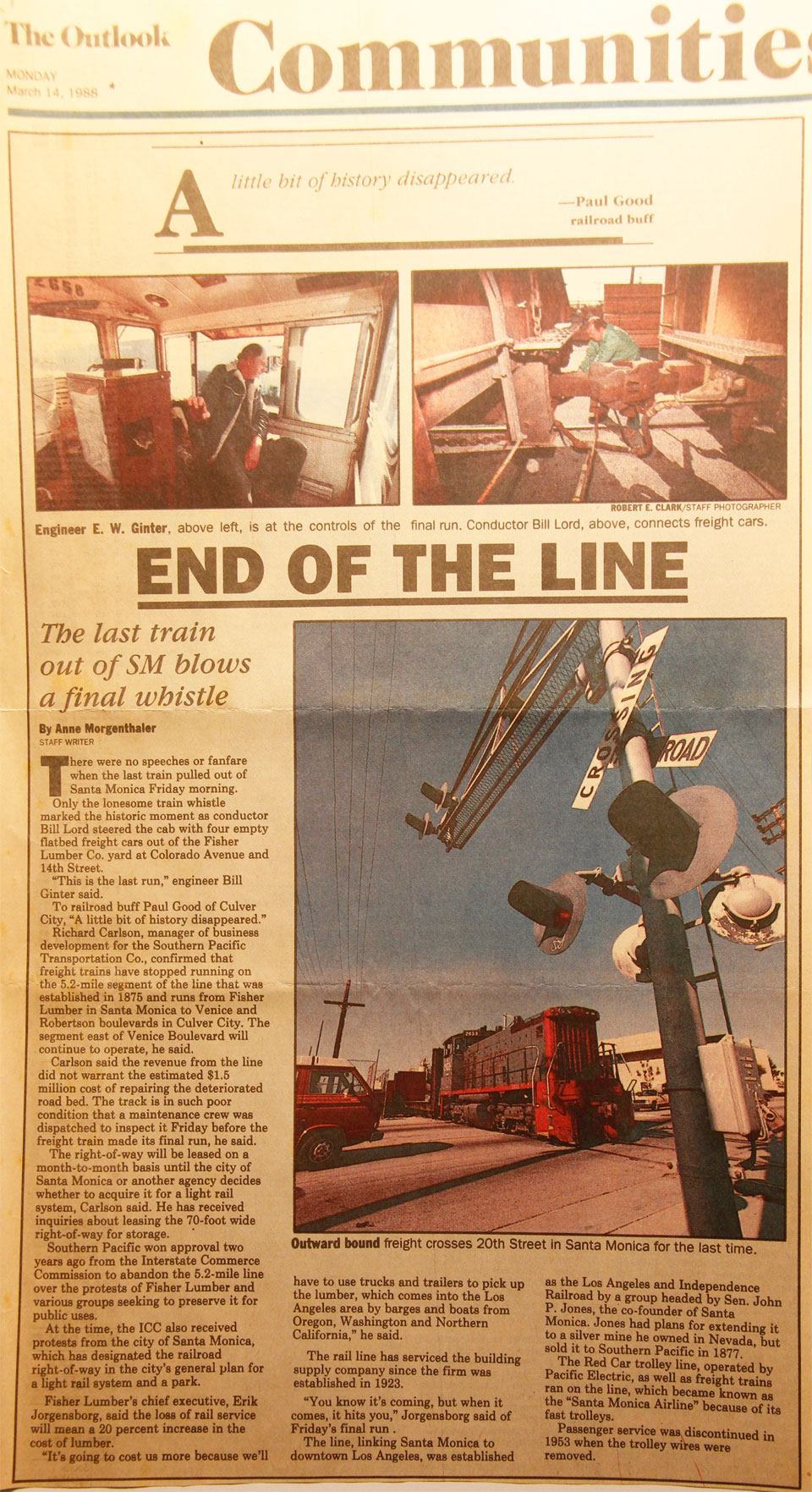 “END OF THE LINE,” the headline screams in all caps from the yellowed newspaper.

The story is buried in the Communities section of the Evening Outlook, announcing a bit of L.A. County rail history.

“The last train out of SM blows a final whistle,” the paper reads.

“There were no speeches or fanfare when the last train pulled out of Santa Monica Friday morning,” the article continues. “Only the lonesome train whistle marked the historic moment as conductor Bill Lord steered the cab with four empty flatbed freight cars out of the Fisher Lumber Co. yard at Colorado Avenue and 14th Street.”

It was early March in 1988 and the old diesel engine’s departure marked the last time a train ran through the streets of Santa Monica, at least until very recently.

While passenger train service to Santa Monica had ended in 1953 when Pacific Electric stopped running the Santa Monica Airline for the public, the route continued to service freight trains for another three decades.

History was made yesterday when a passenger train pulled into Downtown Santa Monica for the first time in more than 60 years. The train was towed into the 4th Street and Colorado station as part of initial clearance testing for Expo Phase 2, scheduled to open to the public in the first half of 2016.

With the coming Expo line, there is also the potential that the new transit line will help transform the former industrial corridor through which it runs into thriving, walkable, transit-oriented neighborhoods.

The Evening Outlook article reveals a bit more of interesting history: Expo has been a long-time coming. The Outlook notes, “The right-of-way will be leased on a month-to-month basis until the city of Santa Monica or another agency decides whether to acquire it for a light rail system.”

When news came that Southern Pacific wanted to abandon the route, Santa Monica was thinking ahead. According the article, numerous protests were filed, including one from the city of Santa Monica, “which has designated the railroad right-of-way in the city’s general plan for a light rail system and a park.”

Others wanted to use the right-of-way for storage, but thankfully, they didn’t prevail.

Nearly three decades later, the dream of a light rail system reaching Santa Monica is finally being realized and trains — albeit much more environmentally friendly ones — are once again rumbling through the beachside city.