Home Local History Throwback Thursday: When Santa Monica Pier Was Home to the “Acme of... 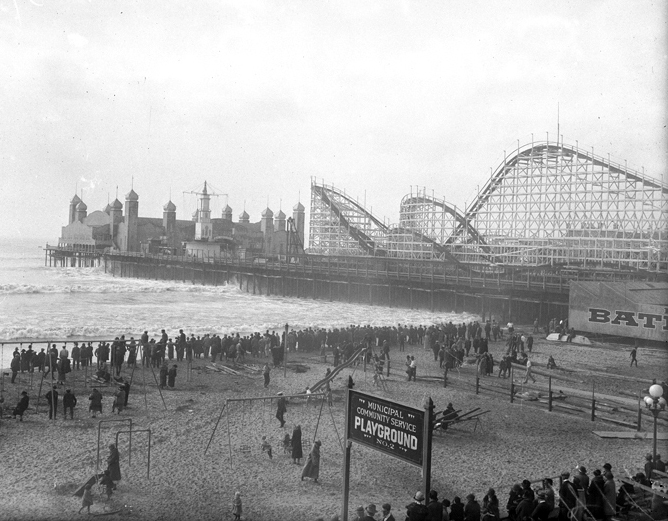 Tonight is the inaugural performance of the 2015 Twilight Concert series at the Santa Monica Pier. Every year, the concerts draw thousands to the iconic destination to hear music and mingle with friends amidst the sand and ocean breezes. But did you know that concerts on the Santa Monica Pier are a tradition that go back nearly a century? Let’s take a trip back with the help of Santa Monica Public Library’s digital archives to a time when bathing suits were actually suits, the mustaches were all waxed, and Santa Monica Pier was home to the “acme of dance palaces.” 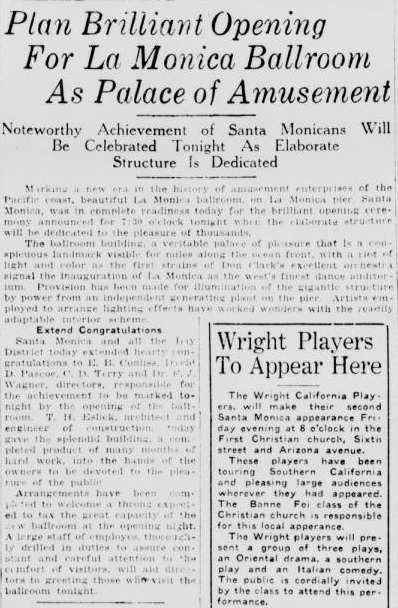 On July 23, 1924, the La Monica ballroom, “a veritable palace of pleasure,” according to the Evening Outlook’s story on page 8, opened to much fanfare.

By the roaring ’20s, the Santa Monica Pier, built in 1909 to carry sewer pipes out past the breaker, had become one of the premier pleasure piers of Santa Monica Bay.

“Marking a new era in the history of the amusement enterprises of the Pacific Coast, beautiful La Monica ballroom opened on La Monica pier Santa Monica, was in complete readiness today for the brilliant opening ceremony announced for 7:30 o’clock tonight when the elaborate structure will be dedicated to the pleasure of thousands,” the Evening Outlook reported.

“The ballroom building, a veritable palace of pleasure that is a conspicuous landmark visible for mile along the ocean front, with a riot of light and color as the first strains of Don Clark’s excellent orchestra signal the inauguration of La Monica as the west’s finest dance auditorium,” the Outlook gushed.

“Provision has been made for illumination of the gigantic structure by power from an independent generating plant on the pier. Artistes employed to arrange lighting effects have worked wonders with the readily adaptable interior scheme,” the Outlook reported.

In fact, when it opened, La Monica ballroom was the largest dance hall on the west coast, with capacity for upwards of 5,000 people and a 15,000 square-foot dance floor.

“Arrangements have been completed to welcome a throng expected to tax the great capacity of the new ballroom at the opening night,” the Outlook reports. 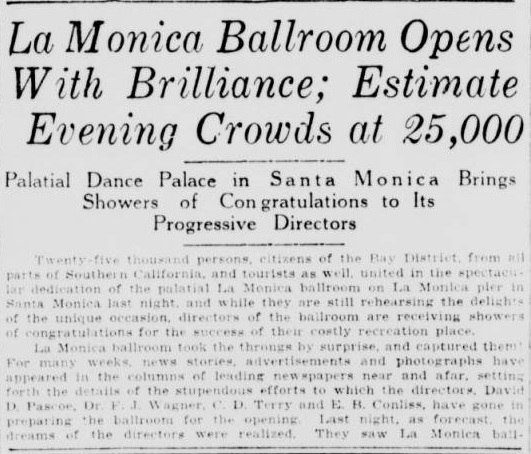 “Pretty as the Castles of Fairyland”

It turns out that opening night went off without a hitch, according to The Evening Outlook‘s report from the next day.

“Twenty-five thousand persons, citizens of the Bay District, from all parts of Southern California, and tourists as well, united in the spectacular dedication of the palatial La Monica ballroom on La Monica pier in Santa Monica last night,” the Outlook reported on July 24, 1924. “[A]nd while they are still rehearsing the delights of the unique occasion, directors of the ballroom are receiving showers of congratulations for the success of their costly recreation place.”

It sounds as if La Monica ballroom was quite the sight on opening night.

“Last night, as forecast, the dreams of the directors were realized. They saw La Monica ballroom, with its brilliantly lighted minarets, pretty as the castles of fairyland; its lavish interiors suffused with enchanting kaleidoscopic color; and uncounted dancers keeping tune with the harmony of Don Clark’s matchless orchestra,” the Outlook reported.

The event was apparently well-attended by local dignitaries, as well.

“Mayor John C. Steele and fellow commissioners of Santa Monica and other prominent citizens of the Bay District and elsewhere were present and extended congratulations to those who brought about the realization of La Monica ballroom. Praise and good wishes were expressed in tokens of flowers, which graced all sections of the ballroom and the place occupied by Don Clark and his musicians,” the Outlook reported.

Despite the number of people who showed up to celebrate the opening of the ballroom, designed in imitation of the Moorish palaces of Spain, the evening “went along in delightful precision.”

The great success of opening night portended great things for the ballroom, at least so the Outlook reporter believed.

“Success of La Monica ballroom is an assurance, it is believed. That is on the lips of every person who was present on the opening night, and the good impressions received will be carried far and wide in stamping La Monica ballroom as the acme of dance palaces,” the Outlook concluded.

La Monica ballroom may no longer be there — it was converted into a rollerskating rink in the 50s and then demolished in the 1962 — but its spirit lives in every summer during the Twilight Concert Series when the crowds, from all parts of Los Angeles, the country, and even the world, continue the long-standing tradition of heading down to the century-old pleasure pier for a some musical fun in the sand.

Fun fact: Don Clark and his orchestra — known as the Los Angeles Biltmore Hotel Orchestra — recorded a song two years after they played La Monica’s opening night called “I’ve Got the Girl,” featuring an up-and-coming vocalist at the time by the name of Bing Crosby. Take a listen below to get in the mood for tonight’s concert.