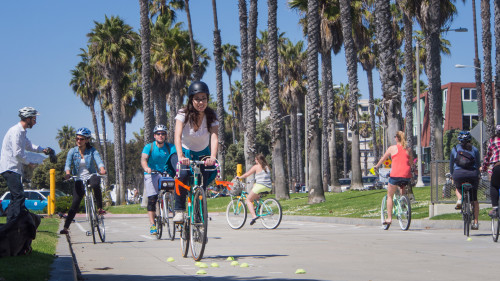 The Santa Monica Police Department will once again be on the look out for unsafe behavior by all street users, whether you are riding a bike, walking, or driving a car.

“Special attention will be directed towards violators speeding, making illegal turns, failing to stop for signs and signals, failing to yield to pedestrian in crosswalks and similar hazardous behavior,” officials said in a press release issued Tuesday.

“Additionally, enforcement will be taken for observed violations when pedestrians cross the street illegally or fail to yield to drivers who have the right of way. Bike riders will be stopped and citations issued when they fail to follow the same traffic laws that apply to motorists,” the release stated.

In the past, the SMPD has selected different months to target specific poor behaviors by road users. In July 2014, the SMPD focused on bicyclists, since, under the California Vehicle Code, people on bikes have to follow the same rules — and have the same rights — as people in cars, even though, “a majority of the collisions involving bicyclists have been determined that the other party was at fault,” according to the SMPD.

The upcoming enforcement operations are only the most recent in an ongoing series by SMPD, which began last fall and are designed to treat all road users the same when it comes to enforcement.

Since then, the Santa Monica Police Department, in collaboration with the Bike Center, put out a guide to smart cycling to help people better understand their rights and responsibilities on the road. As did the local chapter of the Los Angeles County Bicycle Coalition, Santa Monica Spoke, which is available here.

While equal enforcement of traffic laws is a step in the right direction, redesigning streets for people and educating road users are both essential to improving safety.

In March, Santa Monica signed on to the US Department of Transportation (USDOT) Mayors’ Challenge for safer streets.

“With citywide (and eventually regional) bike-share coming this year, we must focus even more on safety, and how to create conditions and foster awareness such that we move toward the Vision Zero goal of no accidents, no deaths, no injuries,” Santa Monica Mayor Kevin McKeown said of his support for joining the challenge in March.

In fact, Breeze Bike-share, as Santa Monica’s new system is called, is scheduled to begin a test run on August 13 and people can already buy founding memberships. The complete 80-station, 500-bike system is on schedule to launch in November.

Santa Monica has already had some success in creating shared streets in certain parts of the city, especially through implementing its Bike Action Plan three years ago. And, the upcoming Pedestrian Action Plan should continue that work, as should community efforts like “Safe Streets Santa Monica,” spearheaded by local Planning Commissioner Richard McKinnon.