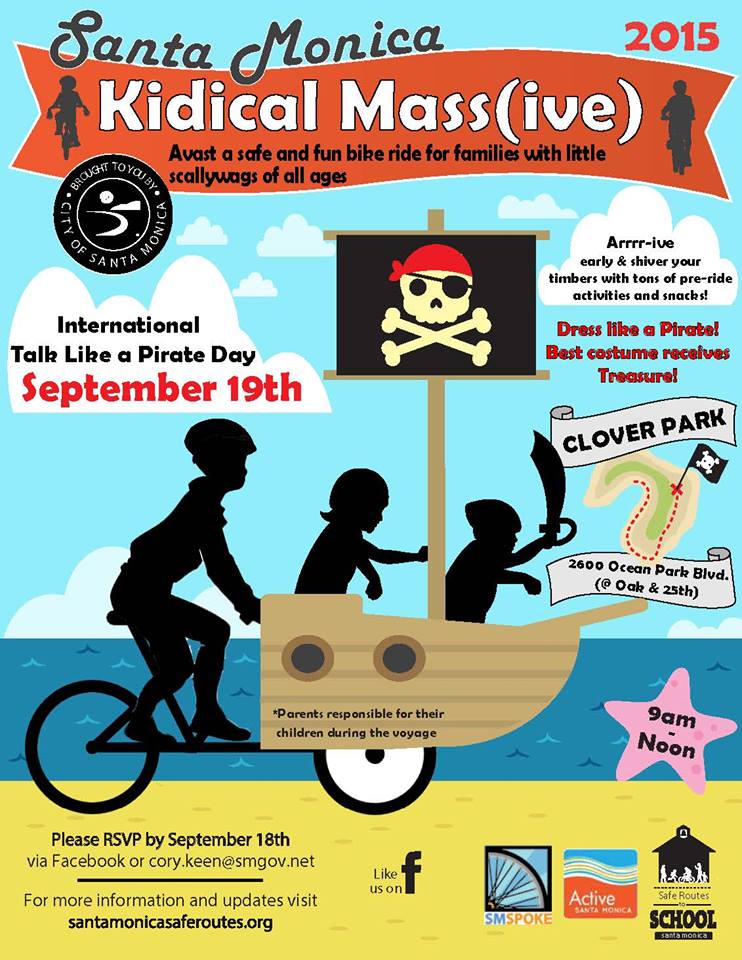 Celebrate Talk Like a Pirate Day with a family-friendly, buccaneer-themed bike ride, find out the latest in environmentally-friendly vehicle technology at the Alt Car Expo, and learn about what Santa Monica can do to fund affordable housing in the future.

Head over to Clover Park on Saturday, September 19 at 9 a.m. for a family-friendly pirate-themed bike ride. If you’d like to join the fun, RSVP to cory.keen@smgov.net.

Yes, costumes are encouraged. There will be “treasure” awarded for the best costume. The ride starts at 10 a.m., but bike safety checks, pirate hat/ helmet decorating, and snacks/refreshments start at 9 a.m.

This is the inaugural Kidical “Mass-IVE” because it will be happening in cities around the world, according to the event’s Facebook page.

Kidical Mass is co-sponsored by the city of Santa Monica, Active Santa Monica, Santa Monica Spoke, and Safe Routes to School and is a fun, safe way to promote smart cycling for kids while raising awareness in the broader community about the need for safe streets for our children.

“We’ll be showing that Kids are Traffic Too and that cities that plan for family biking are more livable, sustainable, profitable, and FUN!” according to the Facebook page.

For more information about Kidical Mass, Bike It! Walk It!, and Safe Routes to School, visit smgov.net.

Does Affordable Housing Have a Future in Santa Monica?

Currently, the city is in the throes of a major housing supply crisis and the dwindling funds for subsidized affordable housing, which serves low-income residents, has only exacerbated the problem.

There will be another opportunity to weigh in on the issue on September 26 at a special meeting of the Housing Commission at 10:30 a.m.

For more information, contact the City of Santa Monica Housing Division at (310) 458-8702 or visit www.smgov.net/housing.

The AltCar Expo will celebrate its 10th anniversary at the Santa Monica Civic Auditorium this weekend.

“The Expo will feature more than 35 retailers featuring alternative fuel vehicles that consumers will have the opportunity to test drive,” according to the event organizers.

The Expo kicks off Friday with “a keynote address by best-selling author, thought leader, entrepreneur and Stanford lecturer, Tony Seba… who believes the US will be driving all electric vehicles and totally solar powered in 20 years,” organizers said.

Selba “will talk about what the next 10 years will look like in the alternative vehicle industry and discuss how technology will impact the way we live and drive,” according to event organizers.

The event has come a long way in the last decade. The AltCar Expo began as “a grassroots exposition in response to a growing need for non-gasoline fueled vehicles,” organizers said.

The Expo originally featured vehicles that had been converted to run on alternative fuels, neighborhood electric vehicles, and prototypes.

Since the 2005 launch of the AltCar Expo, those who want to break free of fossil fuels have seen their options multiply.