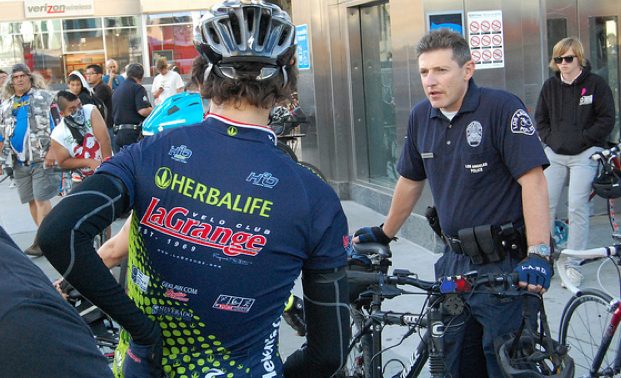 A new law just signed by Governor Jerry Brown will make it possible for bicyclists who are ticketed for certain infractions to attend a class on safe bicycle riding and thus reduce their fines.

The bill, A.B. 902, has been tracked by Streetsblog since it was introduced by Assemblymember Richard Bloom (D-Santa Monica) in February. It was amended a few times, but survived the process of squeezing through the legislature with mostly minor changes.

“When a bicyclist is ticketed for a moving violation in California, they by default receive the same monetary fine as when driving a motor vehicle. This means that with court fees added a stop sign violation can cost around $200, and running a red light around $400,” explained Bloom.

“The penalty should be determined so as to encourage safe behavior and not so punitive that it discourages bicycling altogether, especially for low-income individuals who rely the most on bicycling for everyday transportation.”

One of the changes clarified that any class taken in lieu of a fine would have to be “sanctioned by law enforcement.” Robert Prinz, Education Coordinator at Bike East Bay, who worked on putting the bill forward, said this was an important clarification.

“That means there would have to be a certain level of standard for the information provided in the class,” he pointed out. Also, he said, “for the most part law enforcement has a pretty good idea of what’s important for bicycle safety, but some police departments would benefit from attending some of these classes themselves.”

The other change to the bill removed a requirement that classes be offered free of charge. This was originally included because it created more of an incentive for people to take safety classes, and also because it’s the way Bike East Bay handles its education programs. But other advocacy organizations didn’t want to restrict their own, not-yet-in-existence programs in this way.

Whichever way a program is set up, the hoped-for result is a reduced fine and a more educated and knowledgeable bike rider.

Prinz points out that it will take some work to set up education programs where none exist now, and that it’s up to local bicycle advocacy groups to get the ball rolling. To that end, Bike East Bay has been working with other advocacy groups to formulate the best programs for local needs. Los Angeles County Bicycle Coalition, the city of Long Beach, and the San Francisco Bicycle Coalition have all expressed interest in creating diversion programs. Davis already has an on-campus diversion program and is interested in expanding it citywide. The cities of Huntington Beach and Alameda both used to have programs but suspended them because of a legal prohibition against them in the existing vehicle code. The Marin County Bicycle Coalition already has a diversion program, which it has been able to run because of strong local support from the police and courts.

“For sure it’s going to be easier to get these programs going in areas with established advocacy organizations,” said Prinz. “In rural or less populated areas there is going to be a need for outreach and education.”

Bike East Bay currently incorporates a diversion program into its regular educational offerings. Like Davis, UC Berkeley has its own police department that issues citations on campus. For on-campus infractions, ticketed bicyclists can attend a class, bring proof of attendance to the police, pay a fee, and have the ticket destroyed. The fee, around $50, is much less than what they would have to pay for a ticket if it went through the court system.

“Most police departments will hold a ticket for anywhere from thirty to sixty days before sending it on” to the courts, says Prinz. “So if ticketed cyclists attend one of our classes during that time, the ticket never gets sent to the courthouse, so there are no added-on fines,  no court costs at all.” This system greatly simplifies the entire process by limiting the exchange of money to a single transaction between the ticketed individual and the police.

There are 33 cities in the East Bay, and Bike East Bay would need to set up agreements with local police departments in all of them. “There are some cities where we don’t have any regularly scheduled classes,” said Prinz. “This could be an impetus to get those police departments involved and get classes set up there.”

Once a program is approved, said Prinz, individual officers don’t even need to have a lot of knowledge about the program. “UC Berkeley police use a sticker on the back of citations that have information about our classes,” he said, which include a phone number and information about signing up for classes.

The monetary benefit to an individual could be huge. “A $500 ticket can be a significant financial burden,” said Prinz, “and delay in taking care of it can cause even further consequences. But for the state or county, there is little monetary impact from creating these diversion programs because there are such a small number of bicyclist citations written every year compared to the number of motor vehicle citations.”

So even if a large number of bicyclists are able to take advantage of these programs, it won’t cause a significant loss of revenue to the courts. “If we’re successful in increasing bicycle mode share,” said Prinz, “and if there’s a huge jump in the number of ticketed bicyclist, we might have to revisit this in ten years.”