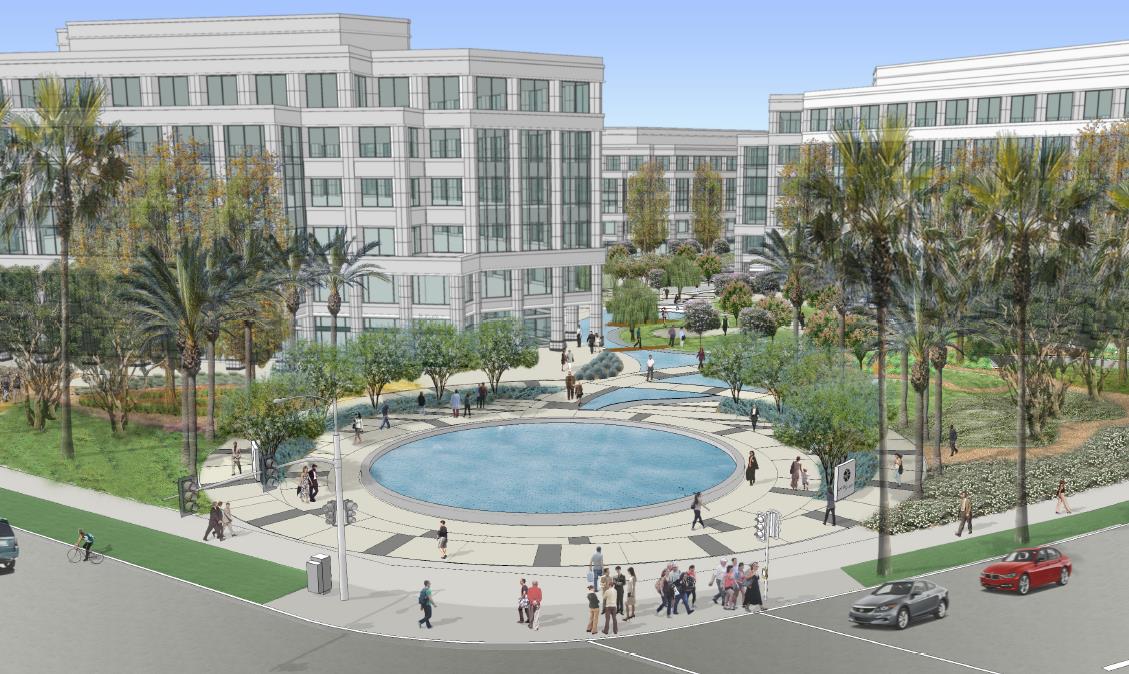 The Expo-adjacent Water Garden at Olympic and 26th Street will get a landscape overhaul ahead of the Expo line opening next year. The 1,239,577-square-foot office park, built in the late 1980s, is revamping its open space “to decrease water usage” and “strengthen connectivity to the adjacent Bergamot Expo Station,” according to city officials.

“The project includes new landscape plans, hardscape and paving, exterior lighting, open air pavilions, amenity and recreation areas, a reconfigured pedestrian drop-off zone and an updated sign program for the office complex,” according to a staff report presented to the Architectural Review Board last November.

The Water Garden is directly across 26th Street from the former Papermate factory that is slated to become another office park after local no-growth activists stalled plans to transform that parcel into a mixed-use, transit-oriented community with nearly 500 new apartments and room for restaurants and retail as well as office space.

The Water Garden’s new plan should reduce water usage by half as well as create “an opportunity for outdoor recreation, gathering spaces, and a welcoming environment for visitors and residents in the area,” according to the staff report.

Construction is underway on the upgrades to the open space, but here are few renderings of what to expect once the remodel is complete.

“The [Central Plaza] area is intended as the main focal point for the site and serves as a large plaza targeted for gatherings. Amenities include a fire pit, seating, amphitheater and covered pavilions,” the staff report reads. “The space is punctuated with shade trees and cut-in planted borders. A rectilinear paving pattern is introduced in neutral tones and intended to complement the surrounding building forms.”

The “Great Lawn” area is described in the staff report as “an open lawn area centered in the site provides for a flexible space for potential outdoor screenings, sports, sunning and people watching. The lawn space shares an edge with the reduced lake feature and is adjacent to the Central Plaza.”

In the Northeast Garden area, there will be “shaded seating areas and demonstration garden areas of drought tolerant and California native plants to showcase and inform sustainable landscaping practices,” according to the report.

Throughout the site, there will also be “Passive recreation activity areas include a bocce ball court, workout/yoga areas and grass areas for low impact exercise. A decomposed granite pedestrian ‘Healthy Living Parcourse’ meanders around the site perimeter for a passive exercise opportunity for office tenants, visitors, and public,” according to the staff report.

The Water Garden is in the heart of the Bergamot Area, a largely commercial and formerly industrial part of Santa Monica. It’s one of the few areas of town where there is almost no housing currently. Plans to transform the area by redeveloping sites like the former Papermate factory into transit-oriented, mixed-use areas would have transformed the district, which is largely deserted during non-working hours.

A revamped Water Garden will offer people getting off the Expo line at 26th Street a more welcoming site than the barbed-wire fence that lines the south end of the Papermate factory site. The question is, without any major destinations in the area, will it draw people during off hours? Or will it remain a mostly vacant space on weekends and after 5 p.m. on weekdays?