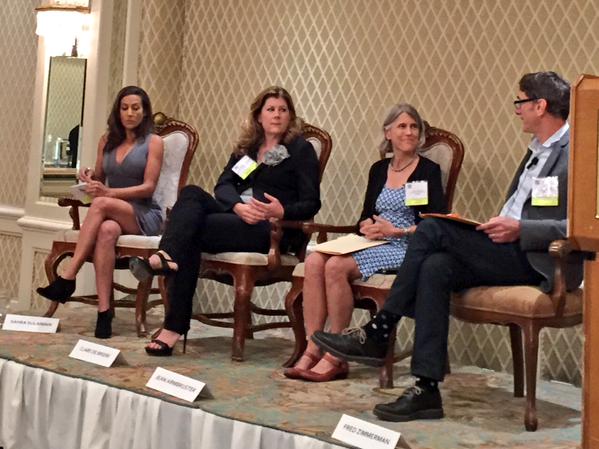 These were the questions tackled by a Westside Urban Forum panel Friday, moderated by UCLA Professor, Fred Zimmerman, who chairs the Department of Health Policy and Management.

Overall, the conversation focused primarily on the question of access. Those living in a healthy community can access the things that are essential to their day-to-day lives more easily: schools, parks, grocery stores, etc. But the question of access turns out to be more complicated than just whether or not these things are located around the corner.

“When we are looking at building a healthy community… we have to look at the root causes,” Armbruster told the crowd of several dozen in attendance, including Santa Monica City Manager Rick Cole.

One of the root causes of problems in a community, said Armbruster, is housing affordability.

Over 50 percent of households in L.A. County are rent-burdened, she said, calling it a root cause of a lot of social ills.

People have to live far away and commute, don’t have money to spend on health insurance, healthy food, among other important things, she said. “They just need a place that they’re not going to pay way more than they can afford.”

The panel’s moderator, Zimmerman, has written on this exact point for Santa Monica Next.

Of course, housing affordability is just one — albeit large — piece of the puzzle. From the private developer side, De Briere said her company strives to knit together the urban fabric so walking to and from different buildings, transit, and other places, is not only possible, but attractive.

Currently, the Ratkovich Company is remodeling the Macy’s building in Downtown L.A. into an open-air mall that will include direct access to the Metro 7th Street station. Downtown L.A. has transformed in the past decade from a dead, mostly commercial district into a thriving neighborhood.

But for some communities, decades of disinvestment has a much more enduring legacy.

Sulaiman, who mostly covers South and East L.A. for SBLA, said that the disinvestment in those communities is a major cause of the lack of quality housing, lack of quality transit, lack of work and educational opportunities, etc. that make creating a so-called “healthy community” difficult.

It’s deeper than just an infrastructure problem, said Sulaiman. Programs like Great Streets and PLACE can create better public spaces, but there are social issues that often prevent people in the neighborhoods from being able to use them.

Sulaiman said that, for example, two major barriers to mobility in South L.A. are gangs and police. A young person of color out for a walk or a bike ride can expect to be harassed by one group or the other, she said.

Similarly, if a nearby park is renovated but there is no programming or investment to mitigate the underlying social issues, the park may remain under the domain of whichever gang runs in the area. If you’re a local teen trying to stay out of trouble, odds are you will have to continue to steer clear of the park.

So, yes, we need infrastructure, but we also need to make sure the people who need it can access it, said Sulaiman.

Part of it is an engagement issue, she said. “A lot of that [health-oriented] infrastructure is seen as gentrification,” she said, adding that bike lanes, road diets, etc. are sometimes greeted with the question, “Who is this for?”

Armbruster seconded Sulaiman’s point and said that outreach is vital.

A member of the audience asked, however, how is talking about “healthy communities” any different than trying to achieve the outcomes urban planners have already been striving for years?

For one, said De Briere, the conversation around healthy communities tells the developer that you have to do more than build a park, but also pay for operation and events and programming. It also lets the city look at linkages as it relates to community health and how multiple projects work together.

Armbruster pointed to Los Angeles’ new Health and Wellness Element, known as “The Plan for a Healthy Los Angeles.” She said that the plan “elevates” the topic of health for decision makers and allows for more collaboration among different departments.

Even so, there is room for improvement, according to Sulaiman, who said she wishes the definition of “healthy community” was broader. As it stands, she said, we rely too much on indicators like obesity data as a marker of health. Given that obesity is better understood as a symptom of underlying ills — trauma, food insecurity, economic instability, etc. — it can be one of the least useful stand-alone markers in trying to formulate policy.