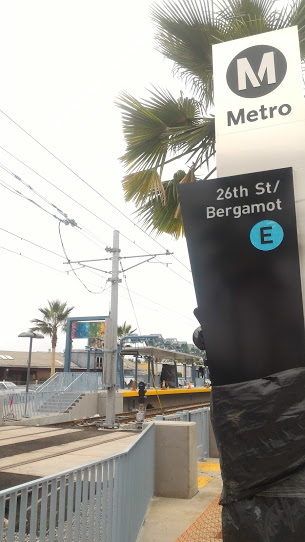 We have gotten pretty regular reminders that Expo phase two is almost complete and will soon be transporting passengers through our fair city. Some reminders have been big and others have been smaller, though not any less exciting.

In the department of small, yet exciting, reminders about the paradigm shift Expo is about to bring to Westside transportation, today we caught a glimpse of the new artwork installed at the Bergamot Expo station at 26th Street in Santa Monica.

The above mural appears to outline Santa Monica history through architecture and includes some pretty recognizable landmarks like the Aero Theater and the historic 13-story Santa Monica Clock Tower. Do you recognize any other historic buildings in the mural?

The art is commissioned and paid for by Metro, the county transit agency that operates the trains and buses. These murals are part of an installation called “Local Color” and is by artist Constance Mallinson, according to Metro’s website.

The artist’s statement on Metro’s website reads, “A local landscape overlaid with a wide variety of colorful objects and natural specimens collected on extensive walks around Santa Monica creates eye catching and imaginative evocations of the locales in the vicinity of the station.”

This station serves Santa Monica’s Bergamot Area, a formerly industrial part of town. Directly adjacent to the stop is the Bergamot Arts Center, formerly a collection of industrial warehouses. When the freight trains stopped running through Santa Monica, the city bought up the property in hopes that it would one day become a passenger train station.

In the interim, the city worked with local artists and transformed the area into a hub of art galleries and performance spaces. The city is currently undergoing a plan to redevelop Bergamot Station into an even more robust arts hub.

You can see what art installations are planned for Santa Monica’s 17th Street and Downtown stations here and here.

While the art comes from Metro, the city is taking on the responsibility of paying for a number of other improvements at all three Santa Monica stations.

“The additional work at Bergamot/26th Street Station entails developing two side platforms instead of one platform to integrate the station into Bergamot Arts Center and Bergamot Transit Village district with signalized pedestrian crossings at both ends of the station. The crossing is being coordinated with proposed improvements in the area, and is critical to providing the direct access that would encourage ridership and connections to pedestrian, bicycle and bus facilities,” according to city officials.

At the 17th Street/Santa Monica College station, those improvements include “a western station entrance and signalized crossing to anticipate surges in ridership. High bicycle use is projected at this station due to proximity to Santa Monica College and a high volume of businesses in the area. This western entrance also supports direct access to Memorial Park recreational facilities, and significantly improves access for future mixed-use housing and commercial development envisioned as part of the Memorial Park activity center outlined in the Land Use and Circulation Element,” officials said.

And, at the Downtown station, “the City and [the Expo Construction] Authority identified an improved alignment that reduces the impact to traffic operation and improves station pedestrian access. The revised alignment softens the curvature of the tracks enabling faster egress across the intersection of 5th Street/Colorado Avenue, reducing the potential wheel noise, and improving the resulting opportunities for use of the remainder of the City-owned site,” according to officials.