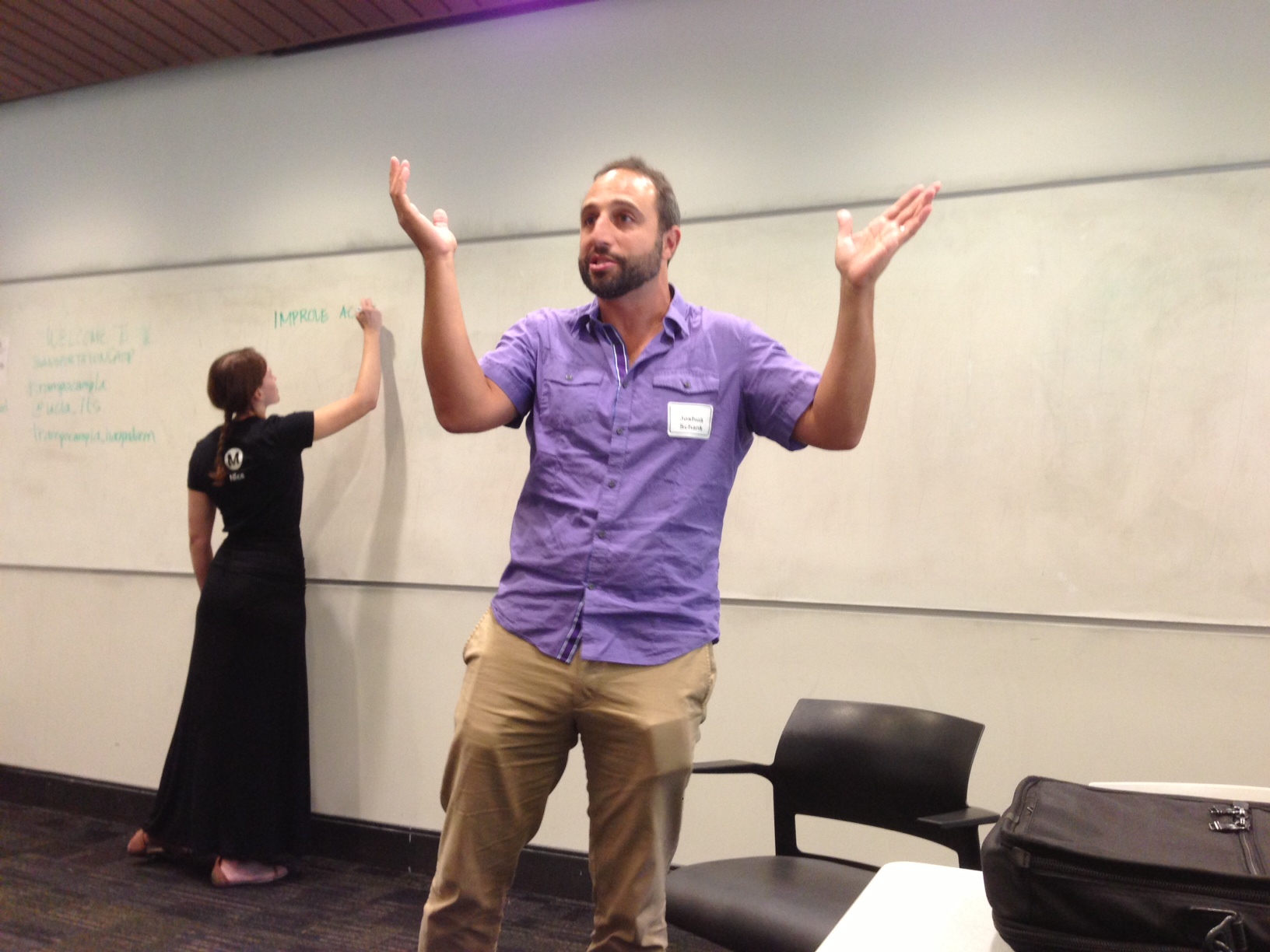 What do you get when dozens of transportation professionals, technologists, and others interested in improving urban transportation networks all in one room at UCLA on a Saturday morning? The answer is Los Angeles’ very first TransportationCamp.

While there were no bonfires or arts and crafts, Saturday’s event was different than your usual gathering of transportation professionals. The atmosphere was deliberately casual for the event, billed as an “unconference.”

What does that mean? For one, it means that those who were attending chose the topics that were discussed during the day-long event.

Since it was started in March 2011 in New York by OpenPlans (Streetsblog’s founding nonprofit),TransportationCamp events have cropped up all over the country.  Transportation Camps are scheduled in New York next month and Washington, D.C. in January.

“This is where [the future of] L.A. transportation is happening,” Matute told the crowd.

Unlike a traditional conference, each session was less a lecture and more a conversation, usually led by the person who suggested the topic earlier in the day.

The format gave people a chance to talk to other conference attendees — including Ashley Hand, LADOT’s transportation technology strategy fellow; Peter Marx, L.A. Mayor’s chief innovative technology officer; and Joshua Schank, Metro’s new chief innovation officer — about the topics most of interest to them. You can read Marx’s impressions of the day here.

Over the course of the day, attendees participated in and facilitated about two dozen different discussions. Topics included autonomous vehicles, measuring “Great Streets,” L.A. County bike-share, identifying and mobilizing Vision Zero stakeholders, the link between land use and quality transit, and a chance to meet Metro’s new innovation officer, among many other things.

A complete list of sessions with links to notes taken during them can be found here, but below are some of our takeaways from TransportationCamp L.A.

Schank recently stepped down as CEO of the Eno Center for Transportation, a nonprofit foundation with the mission of improving transportation policy and leadership, to take his current job with Metro. Before he officially started work Monday, just after moving to L.A., Schank hosted a listening session on how Metro can better serve Angelenos. Ideas ranged from data sharing to all-door boarding to gamification, which uses “game thinking and game mechanics” to engage people in solving problems. An example would be awarding points to people who return bike-share bikes to certain hubs as a way of encouraging users to rebalance the system, according to Mobility Lab.

Schank did explain some innovations he has been involved in. These included kiss-and-ride, transit transfer convenience, and an extensive Eno Center study on transit agency governance. We welcome Schank and look forward to his leadership at Metro.

During the session, as with most sessions, collaborative notes were taken on HackPad, so you can see some of the other issues brought up by the audience here.

Bike-share is expected to be operational in 2016 in Santa Monica, downtown L.A., Long Beach, and West Hollywood. Interested folks convened to discuss bike-share implementation and compatibility.

Attendees spoke about great bike-share experiences from China, to Holland, to Washington, D.C., to Minnesota, to Santa Monica.

There were a lot of questions about interoperability, but little in the way of certainty about bike-share’s future. Salinas said that she was tasked with assuring that the two bike-share systems — Breeze and Metro’s — will have some level of interoperability despite using two different interfaces.

It’s still unclear what that would look like, though Salinas noted that TAP integration could be one strategy. More notes from the conversation are available here.

Beth Steckler from MoveLA facilitated a conversation about what a 2016 Los Angeles County transportation sales tax measure, tentatively being called “Measure R2,” could look like.

As a starting point, she introduced MoveLA’s most recent strawman proposal, which Steckler said was “version 50.” It broke down like this:

The proposed 10 percent for “highway” raised more than a few eyebrows in the room, though it’s better than the 25 percent allocated for highways in the first Measure R.

According to Steckler, the reason there are highway funds in MoveLA’s strawman proposal is because in some areas of the county that are not served by transit, solutions include highway improvements.

One question that came up was why is this tax only a sales tax, but not a vehicle tax, especially when it comes to funding highway improvements.

Of course, this was just the latest iteration of MoveLA’s strawman proposal, which has changed much over the course of the last year. It’s also not clear how much influence it will have on Metro’s decision to place a sales tax measure on the ballot in 2016.

More notes on the Measure R2 session are available here.

While transportation was the main focus Saturday, one session was about the need for better land-use policies in relation to the region’s growing transit network.

“Every parking spot is a potential home,” said one participant, who talked about the importance of reduced- or zero-parking buildings near transit hubs. If you remove parking, you increase capacity for housing, he said.

Someone brought up Minneapolis’ recent parking requirement reforms as a potential model for Los Angeles.

Still, the main takeaway was that even a world-class transit system is only partially complete if you don’t have the density of jobs and homes nearby to complement it. Even as we are adding rail to major job centers on the Westside, current land use patterns in the L.A. region mean people still have to commute long distances, making transit or active transportation less attractive options than driving.

More on that discussion here.

There was a lot going on and a lot to digest. We’re still combing through the notes and learning from the event days later. That being said, we hope we have a chance to do it again in Los Angeles soon.