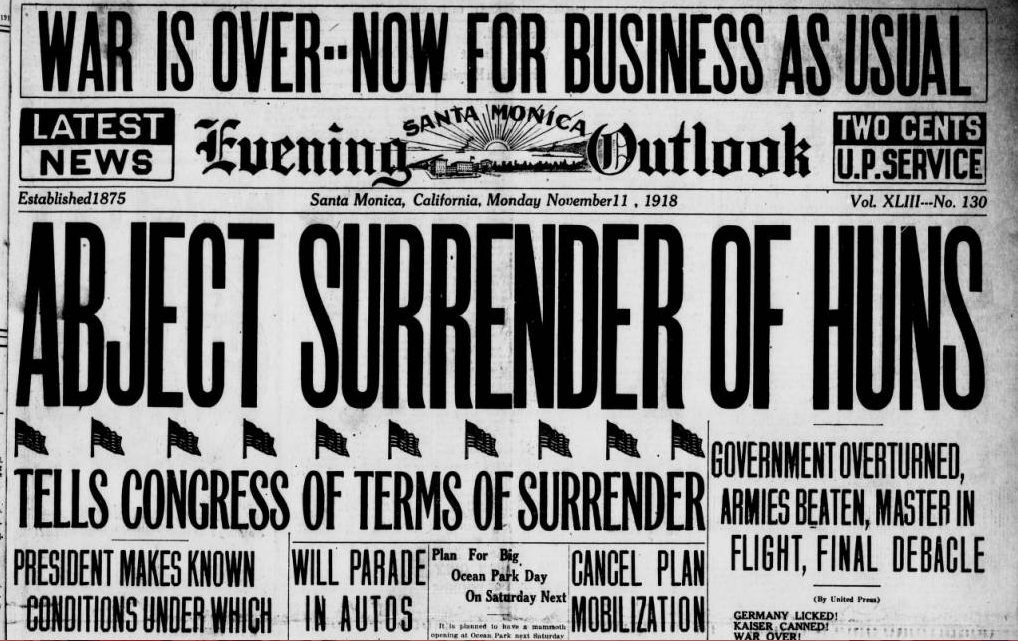 “War is over — Now for business as usual” proclaimed the headline on The Evening Outlook from November 11, 1918. This month, 97 years ago, Santa Monica celebrated the world’s very first Armistice Day — aka Veterans Day — to mark the end of the first world war.

How did Santa Monica celebrate the news of peace in Europe? With a noisy car parade, according to the The Evening Outlook.

“Every cat and dog in town sought the tall timber. The pets could not understand the sudden outpouring of tin cans,” according to The Outlook’s report from November 12.

“They did not realize that the cans were intended for the Kaiser and not for the family pets,” the report reads. “Probably the dogs and cats acted as thousands of Germans have been acting — just made for their hiding places until the noise was over.”

The article also gives a glimpse into the rise of auto-centric reporting in media.

“There were cars for everybody, for those who owned machines generously made room for the less fortunate,” the article reads.

“Any old thing went into the parade and the bars were let way down,” the article concludes. “It was remarkable with so many autos in line and so many careless pedestrians that there were no accidents.”

Yeah, good thing none of those less fortunate careless people walking in the parade didn’t stupidly throw themselves under any cars. That would have put a real damper on things. 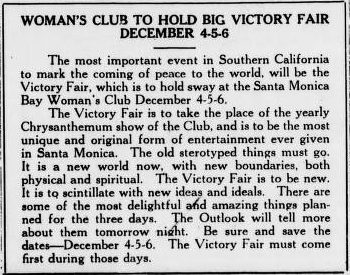 The same day, the Santa Monica Bay Woman’s Club announced the organization would replace its annual Chrysanthemum show with a Victory Fair.

“The most important event to mark the coming of peace to the world, [sic] will be the Victory Fair,” the announcement proclaims. “The Victory Fair is to take the place of the yearly Chrysanthemum show of the Club, and is to be the most unique and original form of entertainment ever given in Santa Monica. The old stereotyped things must go. It is a new world now, with new boundaries, both physical and spiritual.”

“The Influenza Will Be Over By That Time”

Not only was Santa Monica celebrating the end of one of the worst conflicts the world had seen at the time, Ocean Park was about to celebrate the end of a flu quarantine with a big bash, according to the November 11, 1918 edition of The Outlook.

“It is planned to have a mammoth opening at Ocean Park next Saturday. It is believed that the influenza will be over by that time, or at least be subdued,” The Outlook reported.

“The Ocean Park people have been very patient under a long period of quarantine,” the report says. “They knew it was for the good of the city but it seemed hard to remain closed while Venice was open.”

What’s the remedy for recovering from an extended quarantine? A celebration full of “pep and ginger,” according to The Outlook, who interviewed the Ocean Park resident on the committee to plan the celebration, Harmony Brown.

“[Brown] has lived there long enough to realize the amusement men depend upon good crowds. He wants to get the people coming to the Ocean Park plaza as they used to in the good old days,” The Outlook reported, “and anyone who knows ‘Harmony’ knows he keeps after a thing until he gets it.”