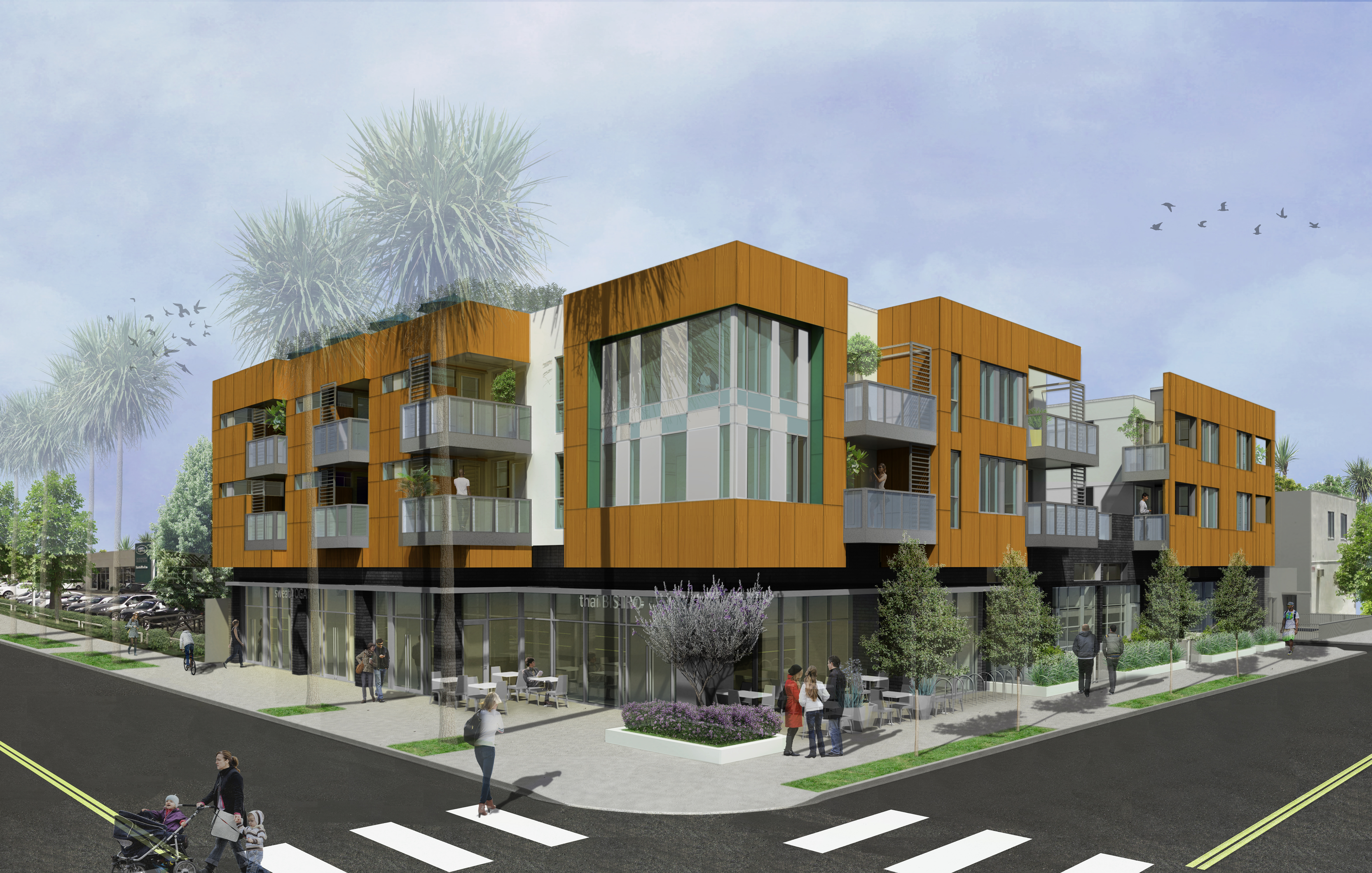 It only took about four years, but a small, mixed-use housing project with 26 proposed homes on a commercial stretch of Santa Monica Boulevard on the east side of town is headed to the Planning Commission next Wednesday.

As proposed, the project would replace a run-down two-story office building and surface parking lot at 3008 Santa Monica Boulevard with a four-story apartment building that includes 3,450 square feet of ground floor commercial space, according to the staff report.

Of the 26 new apartments, four will be deed-restricted affordable, renting to households that make less than 50 percent of the County Area Median Income (AMI). For example, for a two-bedroom deed-restricted affordable apartment renting to an income-qualified household, rent would be capped at $729 a month. A household with three people in it would have to make no more than $38,450 a year to qualify, according to the city’s website.

“The project includes 33 long-term bicycle parking spaces for both commercial and residential uses… located in the first level of the subterranean parking garage in locations convenient to access elevators. Additional long-term commercial bike parking along with showers and storage facilities would be located in a secure location on the ground level, immediately behind the commercial tenant space. Short term bike parking would be located at the front of the property on Stanford Street adjacent to the outdoor dining area and loft-style residential units,” according to the report. The project will also offer free bike valet “during all automobile valet operating hours.”

Twelve of the units–including two affordable ones–will be one-bedroom apartments, seven apartments–including two affordable ones–will be two-bedroom units, four will be three-bedroom units, and there will be three studios. Additionally, the developer will pay $129,938 to the city’s open space fee program and will subsidize 75 percent of monthly regional transit passes for both residents and employees working in the retail portion of the building.

The project is located within a couple blocks of Metro bus stops serving lines 704 and 4 and a Big Blue Bus stop serving line 1. It’s also about 15 minutes by foot — four minutes by bike — from the future Expo light rail station at Olympic and 26th Street.

The project also includes 64 vehicle parking spaces, one more than the municipal code requires, in a two-level subterranean parking garage. Eighteen of the spaces are unbundled commercial spaces, according to the staff report.

Even though it’s a small project, the developer has been trying to make it happen since October 2011, which shows just how long even a modest-sized apartment building can take to go through the city planning process.

However, under the city’s new zoning code, which passed earlier this year, things should move much faster.

The project is small enough to be approved under Santa Monica’s new “Development Review Permit” (DRP) process, which means it can proceed with a vote from the Planning Commission alone. Larger projects have to go before the Council for final approval through a development agreement (DA) process, which can sometimes take years. The DRP process was included in the new zoning ordinance.

In 2014, a similarly-sized project on Pico was approved by the city council after about a two-year-long DA process. At the time, the DRP process was not yet in place.

While the 3008 Santa Monica Boulevard project took years, theoretically now that the DRP process is in place, other similarly-sized projects should be able to move forward much more smoothly and, more importantly, considering the dire need for housing in Santa Monica, more quickly.