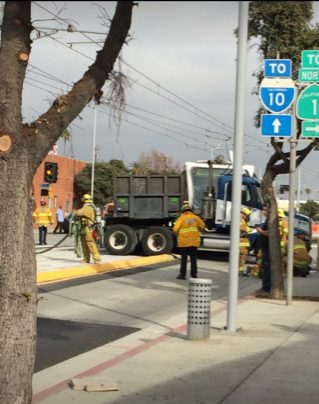 An 18-wheel truck making an illegal left turn across Expo light rail tracks in Santa Monica collided with a test train yesterday, according to the Santa Monica Police Department.

While there were no passengers on the train, there was a conductor and some Metro employees. Only the truck driver received minor injuries and was taken to a nearby hospital, according to police officials.

“The initial investigation revealed that the driver of the 18-wheel truck was travelling westbound on Colorado Avenue approaching 7th street. The Metro Test Train operated by the Conductor was also travelling westbound on the tracks located in the middle of the roadway, at an unknown distance to the rear of the truck,” police officials said in a press release issued Thursday evening.

“Once at the intersection of Colorado Ave. and 7th Street, the driver of the stake bed truck, initiated a left hand turn against posted signs prohibiting such turns, and was struck broadside by the train, causing damage to the truck and its diesel fuel tank and the Metro Test Train to derail,” according to the press release.

The Expo Construction Authority began testing trains this week, running them at normal intervals to simulate future passenger service. According to a recent report, it was anticipated that this week, the Expo Construction Authority would hand off control of the right-of-way to Metro for the agency to begin pre-revenue service of the light rail line.

The transfer of control is a major step toward opening the line to passenger service, which is anticipated to happen in spring 2016.

With increased testing frequency, the Santa Monica Police Department, the city of Santa Monica, and Metro have been encouraging people to be cautious and alert when biking, walking, or driving near the tracks.

Metro offers a list of common sense safety tips to avoid any mishaps with the train:

While some are suggesting this unfortunate collision may be a “a bad sign of things to come,” it can actually beneficial for the future of rail safety in Santa Monica. Though the least number of crashes would be ideal, this testing phase is actually a pretty good time for minor crashes. There were no passengers on board the train, so it did not result in great injury or any commuter delays. Train testing collisions and near-misses could point to further safety and, especially, enforcement measures that could be implemented prior to Expo’s opening.

Regarding the opening, Curbed announced that Expo Phase II would open in April or May 2016, but Metro’s The Source countered, emphasizing that while that time frame looks likely, no firm planned opening date has been set.