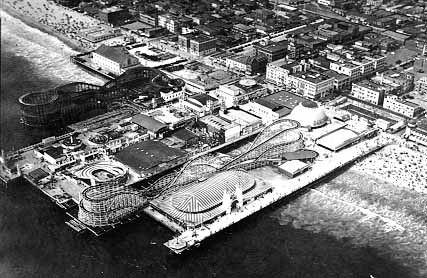 Let’s take a trip down memory lane with the help of the Santa Monica Public Library’s digital archives to a hundred years ago this week when The Evening Outlook announced the deal that would lead to the development of a new Ocean Park pleasure pier following a disastrous fire in 1912 that burned down its predecessor.

Have you never heard of the Ocean Park pier — later home to Pacific Ocean Park? That might be because the pier burned in 1974 and was eventually demolished in 1975. Santa Monica only has one pier today, but in its heyday, the Ocean Park pier, which underwent several permutations over the course of its life, was a major regional draw, attracting thousands daily, much like the now-landmarked Santa Monica Municipal Pier.

The Evening Outlook reported on December 2, 1915 that a deal had been struck by a “big amusement concern” to breathe new life into the southwest corner of Santa Monica, which had been recently devastated by a fire.

“There is to be a pier built that will extend 500 feet into the ocean,” said Secretary Hadden, who was of the Ocean Park chamber of commerce, according to The Evening Outlook. “[A]nd it will have a handsome frontage on the broad walk. While the pier is to be a pleasure pier, in addition to it there will be a number of amusement devices of magnitude constructed at the approach of the entrance. That is, on either side of it. It is the intentions of this newly formed company to operate only the very latest devices for amusement,” the Outlook reported Hadden saying.

Hadden told the reporter that the deal struck was “intended to make [the pier] the White City of Santa Monica bay.”

Of course, this pier later succumbed to a fire like its predecessor and was eventually replaced by Pacific Ocean Park, which opened in 1958.

It closed in the late 1960s and remained abandoned until it burned down in 1974.

Today, the days in which Ocean Park was home to one of the region’s most famous pleasure piers are a distant memory, but a century ago, it was still a celebrated amusement district that drew thousands from all around the region.