Home Mobility A Cyclist and a Motorist Talk 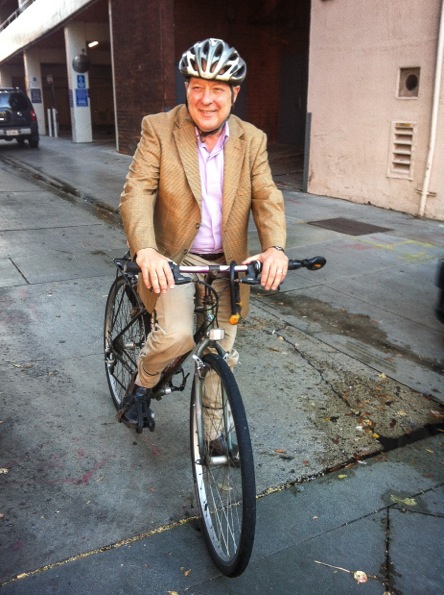 This post originally appeared in The Healthy City Local.

For about 20 years I’ve commuted by bike from my home in Ocean Park to my office in downtown Santa Monica. My route takes me north on Fourth Street, which means crossing the freeway on Fourth, which in turn means cycling past the freeway on-ramp that was added about 25 years ago. It’s not an easy route for a cyclist because there’s a dedicated right turn lane at the intersection that during the morning rush is usually backed up with motorists anxious to get on the freeway.

Right turn lanes are one of many banes of a cyclist’s existence traffic engineers have designed. Right turn lanes put cyclists who are traveling through in conflict with two rules of the road: (i) that slower traffic should stick to the right, and (ii) that cyclists should follow traffic rules like any other vehicle. As I ride my bike north on Fourth, if I stay in the right lane, close to the curb, I interfere with drivers turning right, but if I move over to the thru-lane, I confuse motorists who think I should be over by the curb because I’m a slow-moving vehicle.

If you’re wondering which choice I make, the answer is that once I pass Pico I start looking for a chance to move safely into the thru-lane, which usually I can do. I make this choice because the overriding rule of bicycle safety is to make yourself visible to motorists. The worst thing for a cyclist is to be in a place where motorists don’t expect to or can’t see you—for example, coming off a sidewalk into an intersection. For a cyclist, the problem with a right-turn lane is that if you’re riding on the right, along the curb, it’s difficult for a motorist making the turn to see you, and since it’s a dedicated right-turn lane, motorists don’t expect to see you.

[pullquote align=right]
This was not some tattooed hot-rodder shouting an expletive at a slow-moving 63-year-old cyclist. This was someone of my own demographic, who wanted me to know that in the infinite wisdom of a middle-aged Westsider I was a dangerous biker and (perhaps even more important) that he knew better.
[/pullquote]Let me say that in 20 years I’ve seldom had anything close to a close call. I’m living proof that most motorists are not homicidal jerks, and I hope I’m proof that most cyclists are not suicidal jerks. Once I signal and carefully move into the thru-lane, 99.44% of motorists give me a wide berth as they drive north. Of course I have to be careful about drivers who are in the right-turn lane changing their minds and shifting into the thru-lane, but that’s a matter of not going too fast and making “eye-contact” with side-mirrors. I have no complaints.

But the other day I had an interesting experience. After I’d safely shifted left into the thru-lane and was approaching the intersection at the on-ramp (which is at Olympic Drive, where there’s a light, which was at that moment green for northbound traffic), a car passed me on the right. The car was not going too fast because the driver was slowing for the turn, and as he passed the driver scolded me. He leaned out the window and said, “you’re a dangerous biker.” I caught his eye, and with his left hand he wagged his finger at me. Now when I say “scolded,” I hope you know what I mean. This was not some tattooed hot-rodder shouting an expletive at a slow-moving 63-year-old cyclist. This was someone of my own demographic, who wanted me to know that in the infinite wisdom of a middle-aged Westsider I was a dangerous biker and (perhaps even more important) that he knew better.

I immediately looked up to see if the light was going to change, because if it did turn red, I would have had the opportunity to pull up beside the driver’s window and politely explain my reasons for using the thru-line and not delaying motorists like him who were making right turns to get on the freeway. Alas, the light was green and he was pulling away from me toward the turn. He was already about ten feet ahead of me and I only had seconds to explain to him why right-turn lanes were inherently dangerous for cyclists.

Desperate to sum up the whole situation, I did what I could. I shouted out, “Fuck off!”

The motorist thrust this arm out the window, middle finger extended.

Thus concluded another dialogue between cyclist and motorist.