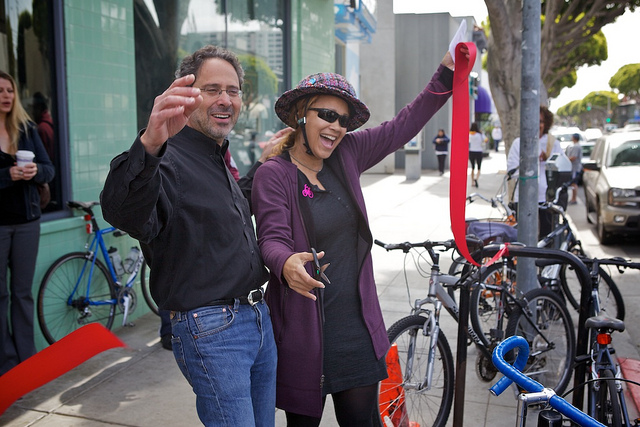 SBCA tapped Bloom, who sat on the Santa Monica City Council from 1999 until 2012 when he was elected to the State Assembly, for the honor because of his work at the state-level to make California streets more sustainable and safer for people to ride bikes, walk, and otherwise get around without driving.

“Not only has he actively supported sustainable transportation in his district, including the expansion of Metro transit into the westside and the implementation of Santa Monica’s new bike-share system, he is a champion of bicycling legislative efforts at the state level,” Melanie Curry at SBCA writes.

Specifically, Curry points to Bloom’s work on AB 902, which he co-authored with Assemblymember David Chiu.

AB 902 “allows cities and police departments to set up education programs allowing bicyclists to lower fines by taking bike safety classes, something that car drivers have long been able to do. Lower fines will likely be helpful for low-income bike riders, who make up the majority of people riding bikes for transportation. Developing bike safety classes can also give advocates one more set of tools to encourage bicycling in the state,” Curry writes.

He has also been chair of the Assembly Budget Subcommittee on Resources and Transportation, where he “has been a champion for smart, sustainable development, reducing reliance on fossil fuels, and focusing congestion relief investments on transit, walking, and bicycling. He is also a proponent for the sensible solution of investing Greenhouse Gas Reduction Funds into the Active Transportation Program, which remains one of the main sources of funding for bike and pedestrian infrastructure locally and statewide,” Curry writes.

Bloom’s environmental work goes beyond just his work on livable streets. He has also pushed legislation through like AB 888, which would ban plastic microbeads from personal care products like facial wash and toothpaste. Microbeads, as they journey down drains and into streams and oceans, collect toxic chemicals and are ingested by the wildlife, which are, in turn, ingested by us. According to Bloom’s office, microbeads contribute approximately 38 tons of plastic pollution to the environment annually.

Most recently, Bloom issued a statement that he would introduce legislation to put an initiative on the state ballot “demanding the federal government overturn the Citizens United case,” according to the statement.

Bloom was also nominated for a Streetsie in Streetsblog Los Angeles’ contest. He was up for “Elected Official of the Year” along with four others, but lost out to L.A. City Councilmember Joe Buscaino.

This is the first year that Streetsblog California has awarded Streetsies since it launched in April 2015.

*Streetsblog California is published by the nonprofit California Streets Initiative, the same nonprofit that publishes Santa Monica Next.