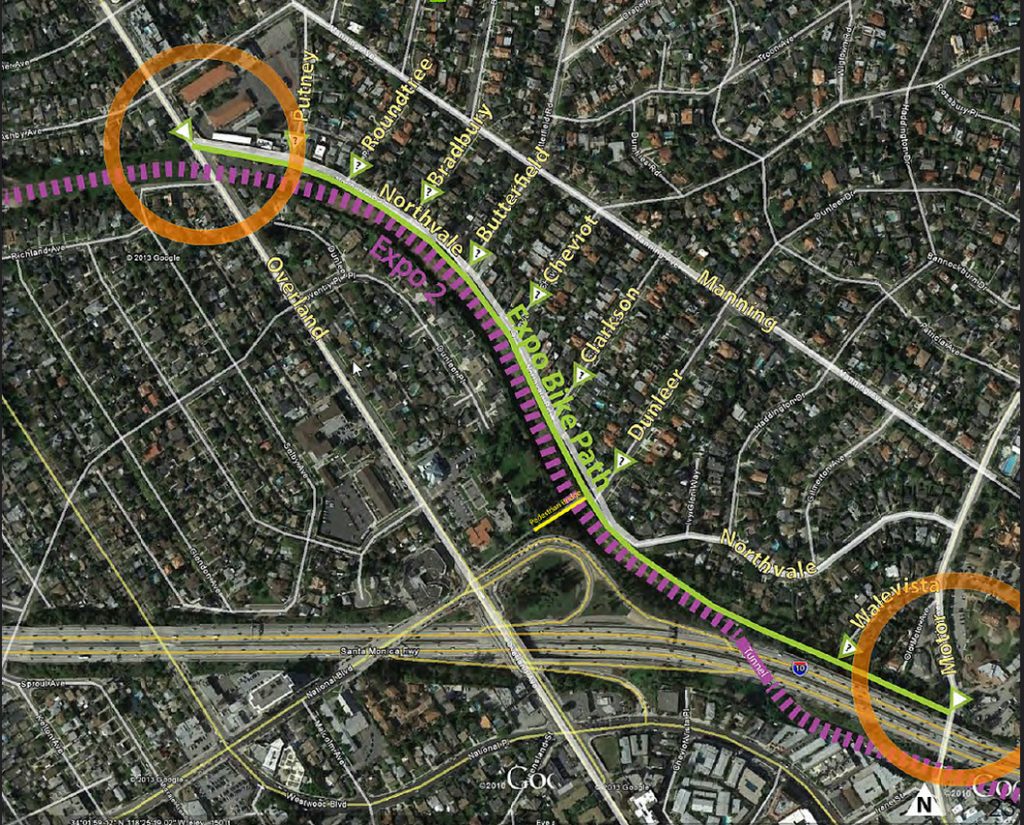 When Metro’s 6.6-mile Expo Line opens in mid-2016, the parallel Expo bikeway will open too.

Except where it won’t.

Two stretches of Expo bike path under construction are nearing completion. Unfortunately there is a 0.7-mile gap between them. Next week the city of L.A. will host a meeting to receive input on plans to close the gap, which parallels Northvale Road. Meeting details below.

Between those two segments – about 0.7 miles from Motor Avenue to Overland Avenue – is the Northvale Gap.

For details of the frustrating legal delays that caused the Northvale bike path segment to drop out of the Expo 2 rail construction project, see Jonathan Weiss’ September 2015 article. In brief, Cheviot Hills neighborhood opposition to the train spilled over against the bike path.

Fortunately, L.A. City Councilmember Paul Koretz, the Department of Transportation (LADOT) and Bureau of Engineering (BOE) are working to get the process unstuck and get the bike path built. Though not a fan of bikes everywhere, Koretz is supportive of closing this critical gap. “I’m looking forward to this cross-town amenity being completed,” Koretz stated “The section in my district poses some unique challenges and it’s good that the public has a chance to learn more about the project and provide feedback before construction begins.”

Next Wednesday night, Koretz, LADOT, and BOE are hosting a community meeting to receive input on alternatives for the bike path, including access points. Here is LADOT’s meeting announcement:

There will be limited free parking, and we will need to leave the Library no later than 8 PM.

LADOT and BOE staff anticipates bringing 2 to 3 concepts, though no decisions have been made to date regarding the final alignment.

It is important that cyclists attend the meeting to show support for closing the gap to complete the path, and to ensure that the final alignment serves a broad array of stakeholders. The alignment of the path should not be too difficult; this is a linear rail right-of-way. Important concerns will likely be neighborhood access points along the path, and how the east end of the path gets cyclists across Motor Avenue.

If you live, work, bike, or breathe in this part of West Los Angeles, make plans to attend next week’s meeting.

For an overall map and early look at Expo bikeway issues, see this 2013 Santa Monica Next article.