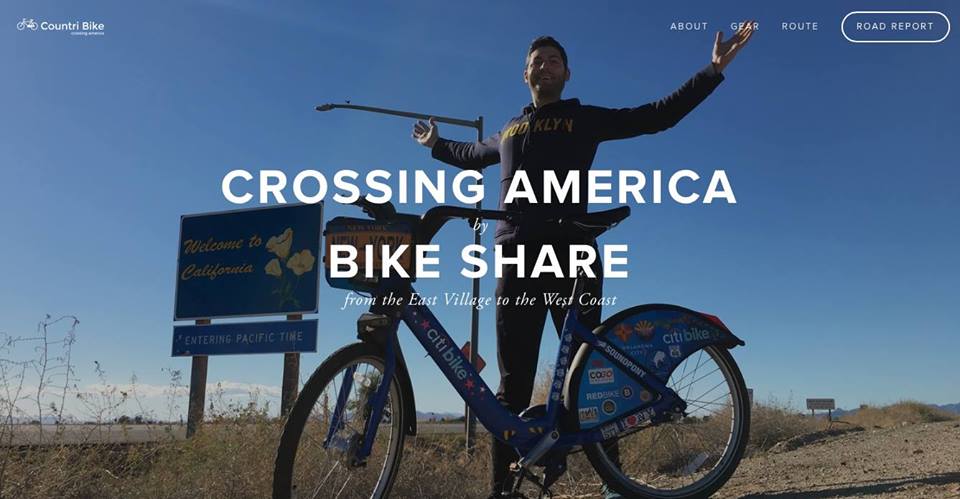 Celebrate the end of one man’s cross-country journey by bike-share with a special Handlebar Happy Hour, get ready for the Expo line with some important meetings about train safety, volunteer for Santa Monica’s annual homeless count, and Laemmle reopens its Downtown Santa Monica movie house just in time to host the New Urbanism Film Festival.

Jeffrey Tanenhaus has ridden a New York City bike-share bike across the US and will end his cross country tour in Santa Monica, January 23 at 3:00pm at the Santa Monica Pier.

Join Santa Monica Spoke, Santa Monica Next, Breeze Bike Share, and the City of Santa Monica in welcoming Jeffrey to the West Coast by riding along with him on the last leg of his journey starting at 2:30 p.m. at the Colorado Center.

“Together we will ride with Jeffrey from Colorado Center Park to the Santa Monica Pier. There we will celebrate the end his journey with a fun ribbon cutting (3:00pm) at the iconic end of Route 66 atop of the Santa Monica Pier followed by a Handlebar Happy Hour,” according to the Facebook event page. The location of the happy hour is still to be determined, so follow the event on Facebook to find out more.

It is arguably the biggest change to Westside transportation since the I-10 freeway was built out to Santa Monica. More than 50 years since the last passenger train ran through our streets, the Expo light rail train is set to start ferrying passengers this spring and the city of Santa Monica wants to make sure everybody is ready.

Lauralee Asch, Santa Monica Police Department crime prevention coordinator, told the Santa Monica Daily Press: “The reason that we think [the meetings are] important is because we want to make sure people are safe and we realize this is a big change in the daily lives of our residents and people who work here because we haven’t had a train here in 50 years.”

Metro just took control of the right-of-way from the Expo Construction Authority, the state-created agency charged with building the train line, on Friday, which means testing is expected to ramp up as Metro begins pre-revenue testing of the trains.

There’s still time left to register as a volunteer to help with Santa Monica’s annual homeless count on Wednesday, January 27 from 10:30 p.m. to 2:30 a.m. Volunteers can register today at www.santamonicahomelesscount.com. No experience necessary. Training will be provided.

Why is this important? According to the city’s website, “The Count is required by the U.S. Department of Housing and Urban Development (HUD) to track each community’s progress towards ending homelessness. Count results have a direct impact on the amount of federal funds allocated to homeless programs nationally and how those funds are distributed. The count and demographic survey will give a snapshot of who is experiencing homelessness and where they are located.”

It’s a big undertaking so the city needs is seeking about 250 volunteers.

Laemmle Theaters in Santa Monica Set to Reopen this Month

The Daily Press also reported that Laemmle’s Monica Film Center on 2nd Street in Downtown Santa Monica is expected to open later this month after a year and a half of renovations. According the Daily Press, the long-awaited reopening could happen by January 29.

“It’s obviously been a long process, and I’m a little gunshy because there’s still a lot that isn’t under my control. But it’s at an advanced stage and we should be able to get done what we need to get done,” Greg Laemmle, CEO of Laemmle Theatres and board member of the Los Angeles County Bicycle Coaltion, told the Daily Press.

The former fourplex will now feature six screens and ground floor restaurant space. The renovated theater will also host the New Urbanism Film Festival on February 24, so mark your calendars.