Home Housing What Does 2016 Hold for Santa Monica? 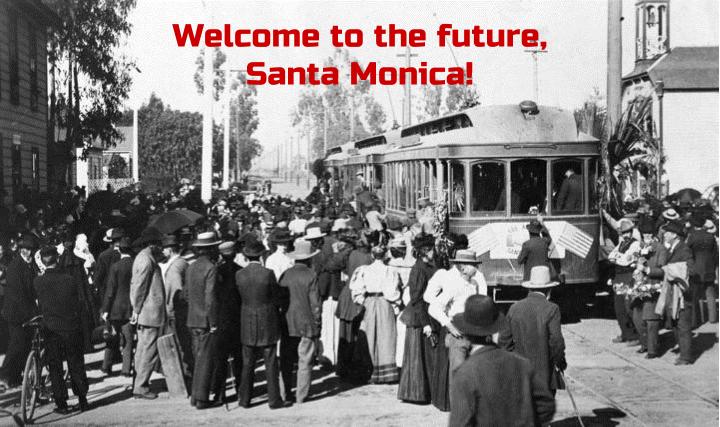 Inspired by our friends at Los Angeles Streetsblog, who recently previewed the upcoming big livable streets events for 2016, we thought we’d take a look forward at Santa Monica’s future. At least to those things we can predict.

This year promises to be a big one in Santa Monica, not least of all because four of the seven city council members are up for reelection. Below are a few of the major milestones we can expect in Santa Monica in 2016. Are there any we missed? Comment below.

Expo will open to the sea

Phase II of the Expo light rail line will open this year, though no official date has been set. It will extend Phase I from its current terminus in Culver City all the way to Downtown Santa Monica, linking the popular destination with the region’s growing passenger train network. It’ll be the first time Santa Monica has had a passenger train run through its city in more than half a century.

It’s a big change for the city and officials are already saying it will be the biggest change to transportation on the Westside since the I-10 freeway was built.

The municipal bus agency will continue its plan to integrate service into the new Expo line. It is the biggest change in service in the agency’s 77-year history. Phase one of the “Evolution of Blue” started last summer with phases two and three scheduled for this February and June, respectively. The changes are many, including the introduction of five new routes and an “Uber-like” on-demand service in the evenings to help get people home from Expo stations. As a result of increased service, Big Blue Bus general fares will go up on January 10 to $1.25, while senior and other reduced fares remain the same.

The roadmap that will determine the future of Santa Monica’s downtown, the one place left in the city where any real housing growth can happen, will go before the City Council later this year. While no concrete date has been set, officials have been aiming for June for the Council to hear the document, which will lay out everything from sidewalk widths to potential locations for parklets to parking requirements to building heights and densities.

With the vast majority of future housing projects proposed for the downtown and the city currently experiencing a dire housing shortage, the specific plan will ideally help facilitate a modest amount of housing growth in the city’s most urban neighborhood.

With 2016 being a presidential election year, we can expect a major turnout when Santa Monica goes to the polls in November (in 2008, nearly 90 percent of registered Santa Monica voters turned out). Four of the seven City Council members are up for reelection and the conservative no-growth group, Residocracy, is making a play to stop most future projects in the city — including affordable housing — with a proposed ballot initiative that would require popular votes on most new construction projects. Leading up to this, Santa Monicans for Renters’ Rights (SMRR), the city’s single-most powerful electoral organization, recently appointed a Residocracy board member to its steering committee. It’s still unclear whether that will influence whether SMRR will throw its support for the Residocracy ballot initiative.

Santa Monica is in line to get its first open streets event — when a particular stretch of road is closed to motor vehicles to allow for people to experience their streets at a human pace — to coincide with the opening of Expo later this year. The route and size of the event is yet to be determined, though officials anticipate it will likely happen this coming summer. While it will probably not be on the scale of a CicLAvia event, Santa Monica will still get a taste of the excitement and fun that follows when people are free to explore their streets without cars.