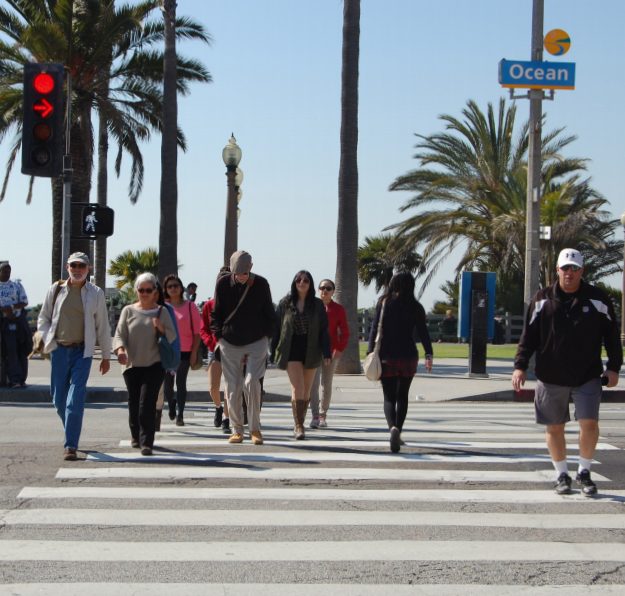 The plan advances a “Vision Zero” goal for the city, which means that the 265 page document outlines numerous strategies aimed at bringing the number of severe injuries and fatalities caused by traffic crashes in Santa Monica down to zero.

Also guiding the plan is the concept of “8 to 80,” a planning term that describes the idea that by making streets safe for the youngest and the oldest members of the community, the streets become safe for all.

“Every year, someone visits Santa Monica and doesn’t go home,” Beth Rolandson, principal transportation planner for Santa Monica, told the City Council Tuesday. “Every week, someone crosses the street and goes to the emergency room before they go home. And that’s something there is a shared interest in changing.”

Rolandson noted that underlying the plan is the idea that this is a “shared priority and a shared responsibility.”

The mood of the Council was summed up by Councilmember Pam O’Connor Tuesday night when she said, “Vision Zero; let’s go for it!”

This has been a long-standing priority for the City Council. Last year, Councilmember Kevin McKeown, who was then serving as mayor, signed Santa Monica on to the USDOT Mayors’ Challenge that called on local leaders to design safer streets for people.

Santa Monica City Councilmember Gleam Davis said she wanted to see the plan be flexible enough to adopt innovative approaches to street safety, like “Dutch intersections,” which she said she would like to see at some of the city’s more “touchy” intersections.

She also noted that it is important to think about this plan “holistically,” adding that it’s important to make sure people have destinations to walk to and, in order to make that happen, the plan should work with the city’s planning process.

Vision Zero is the first of eight policy goals outlined in the draft document, which also includes making walking the first choice for Santa Monicans, creating a “barrier-free” walking network, focusing on equity in access, promoting walkability, coordination between city departments, and educating the community about safety and benefits of walking.

Rolandson noted that Santa Monica’s former industrial corridor, especially around the future 26th Street Expo station, is lacking in terms of adequate pedestrian facilities, especially considering the expected uptick in people walking there when Expo opens in May.

In the plan, there is a mix of strategies for making Santa Monica’s streets safer, including, but not limited to, physical improvements to the street design, such as curb extensions and better lighting. It also includes programs like Safe Routes to School which aims to make it safe for children to safely walk and bike to school.

While the Council voted to adopt the plan, McKeown noted that, as it is implemented project-by-project, residents will have plenty of opportunity for input.