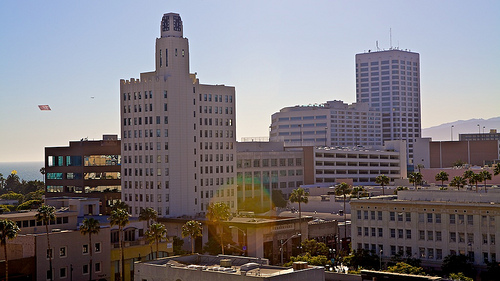 Santa Monica has a new neighborhood association according to several speakers at last night’s Planning Commission hearing on the revamped Downtown Specific Plan.

The Downtown Neighborhood Association (DNA) has officially launched according to its president, who, along with three other board members, spoke at the Wednesday meeting in favor of a sustainable, denser, and more urban downtown core. With the launch of the DNA, Santa Monica now has eight neighborhood groups representing the 8.3-square-mile city.

“We proudly represent and give a voice to the 4,000 residents who live, work, play, and enjoy an urban environment,” said Elena Christopoulos, who identified herself as a 10-year resident of Downtown Santa Monica and the president of what she said was the “newly-established” neighborhood group.

Responding to questions from Commissioner Nina Fresco, Christopoulos said DNA’s board consists of six people and that the organization currently has 74 members.

As with the other 36 people who spoke Wednesday, Christopoulos was there to give feedback on the revised Downtown Plan. Now known as the Downtown Community Plan, it is a 235-page policy document four years in the making. It sets the design standards, sidewalk widths, height limits, circulation strategies, and many other things in the city’s bustling urban core for the next 15-to-20 years. Wednesday was the first of many planned community meetings on the city’s revised Downtown Plan.

Christopoulos called for the Downtown Community Plan to allow for “well-designed, taller buildings in order to address our housing supply shortage” and denser buildings that were held to the “highest environmental standards” to be built near transit. She also said the organization supported exploring capping the I-10 freeway downtown using community benefits from larger development projects.

“DNA’s vision is of an urban environment that embraces a mostly non-vehicular, sustainable lifestyle,” she said, adding that one of the benefits of a denser urban core is that people can walk or bike to enjoy the many amenities in the area.

Rayne Holm, who identified herself as another DNA board member, spoke after Christopoulos. Holm called out previous comments by speakers claiming there is no “community” in Downtown Santa Monica. Holm said that there is “a thriving community of downtown residents” and that there was “an abundance of room for more community.” She argued that the DCP’s proposed height and density limits were, in fact, too low, considering the “large housing shortage” facing Santa Monica and the region.

Both their remarks were in stark contrast to those of another speaker, Laurence Eubank, who identified himself as the chair of the Wilshire Montana (Wilmont) Neighborhood Coalition, another of the city’s eight — including DNA — neighborhood associations.

Eubank said that “residents are incensed” over height, traffic, and density.

Commissioner Amy Anderson asked Eubank what he thought would be an appropriate amount of growth for the future of downtown. When pressed by Anderson, who noted that the local population has been at about 90,000 since 1970, Eubank said that Santa Monica is “about full.”

Eubank was specifically upset about the possibility of three or four sites, including the 4th/5th and Arizona site, where height limits would be set at about 139 feet. At those sites, according to the plan, exceptional projects with myriad community benefits would be considered.

“What residents are saying is that we’re maxed out now,” he said. That claim was belied by the fact that more than half of the 37 speakers, almost all residents, spoke out in favor of seeing growth in the downtown, arguing that the area, which is one of the most transit-rich neighborhoods in the city, was one of the few places in Santa Monica where more housing construction was possible without displacing existing residents. Also in attendance was also representatives of UNITE HERE Local 11, the regional hospitality workers’ union, speaking in support of the a downtown plan that allows for growth in quality jobs as well as housing affordable to the workforce. Representatives of Community Corporation of Santa Monica, the city’s leading nonprofit affordable housing developer, showed up to advocate for more housing growth in the downtown. And several local architects also showed to discuss the design standards in the plan.

Several other members of Santa Monica’s other neighborhood groups were in attendance, many echoing Eubank’s sentiments that there was no more room for growth in the city.

It’s worth noting that after the City Council narrowly voted to reduce the capacity for new housing along Santa Monica’s mainly single-story commercial boulevards last year, Downtown Santa Monica is one of the only places in the city where significant housing growth is possible.

Wednesday night’s hearing was the first of two back-to-back Planning Commission meetings on the revised plan and was devoted entirely to the staff report and public comment. On Thursday, the Planning Commission will begin its deliberation of the draft plan, which could be continued to its March 9 meeting.

The plan will then go through a rigorous gauntlet of community input and vetting before returning to the Planning Commission in May, and eventually going before the City Council for approval this summer.