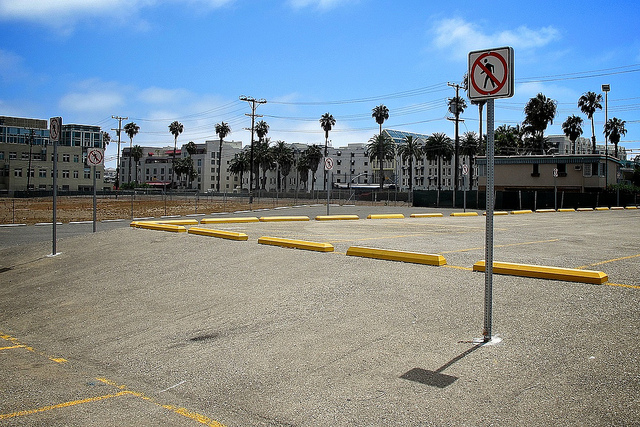 After extensive community input, Santa Monica officials have decided to scuttle plans to transform the 287-acre municipal airport into a park, instead opting to replace the century-old airfield with a “decorative” parking lot.

“As the city works to shut down the airport, we decided to take extensive community input about the future of the land,” said City Planner Jeff James.

“After several meetings held during work hours on weekdays, we have managed to hear from at least a hundred different people and their message is clear: all the residents of Santa Monica demand more parking,” James said, adding that the attendees also coupled their demand for more parking with a call to city officials to end traffic.

“We were able to reach a simple consensus: we will convert the airport into a parking lot that will be for display only,” he said, noting that if it were a functioning parking lot, people would drive there and cause more traffic.

Not everyone was happy, however. Advocates for transforming the land into a park were disappointed to hear the new plans for a “decorative” parking lot.

Paul Phillips, an advocate for a park at the site sighed and said, “I guess it could be worse; we could be building housing there.”

“A park would just cause more traffic,” said Laura Fields, who prefaced her comment by explaining that because she had lived in Santa Monica for “nearly 150 years,” she understood better than anyone there what was good for the city.

In a gesture to compromise, Fred Frank, president of Airport2Parking, a nonprofit advocacy group pushing for the site to become a parking lot, suggested that the city explore the possibility of building an underground park beneath the parking lot.

Planning director David Martin was unavailable for comment as he was weeping in a dark corner as of press time.

However, the plans for the decorative parking lot was celebrated by City Councilmember Kevin McKion.

“The residents have spoken and it is clear that they want more parking and less traffic,” he said.

“I think this is an elegant compromise,” he said, adding “we heard from the loudest, angriest constituents who also don’t have jobs to go to and we responded. If that’s not democracy at work, I don’t know what is.”

Still, there are those who don’t think the proposal goes far enough.

“I’m all for more parking; I know I’ll take my family to the new parking lot just to take in the site of a beautiful sea of empty asphalt,” said Mike French, a 45-year resident of Santa Monica. “But we are Santa Monica and we can do a lot better than just a surface parking lot; I’m disappointed that the city isn’t even considering a full parking structure. What does it say that we, who have some of the highest parking minimums in the region, aren’t willing to go the extra distance?”

City officials said that construction on at least the first phase of the new parking lot — a four-acre segment — could begin as early as next year. For the job, the city has tapped renowned German landscape architect, Cosima Friedrichsdorfer, known as an enfant terrible in European architectural circles for her tendency to eschew tradition greenscaping for a more brutalist approach.

“The concept, I believe, is absolutely brilliant,” Friedrichsdorfer said in a press release issued Friday. “What better way to express the alienating form of post-war urban design than to cover 287 acres with black top that will then be fenced off to human use?”

City officials also noted that the new parking lot would also get about a dozen bike racks to encourage visitors to the parking lot to arrive by more sustainable means.

“In Santa Monica, we really do want to encourage people to get around by much more sustainable means,” said city officials. “We hope that when families visit this new amenity, they will choose to do so in a way that’s fun, healthy, and good for the environment.”