Home Mobility Community Organizing Wins the Day: Skills and Enthusiasm of Many to Build... 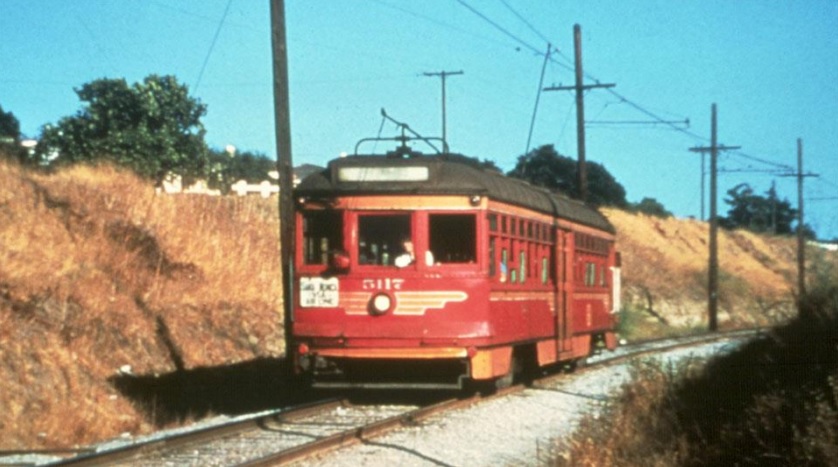 This post was written by Kathy Seal, co-chair of Friends4Expo Transit and was originally published on Streetsblog Los Angeles.

Behind the May 20 opening of the Expo Line to Santa Monica lies the untold story of dozens of dedicated volunteers who worked for decades to make this line happen.

Few people know that Expo Line light rail was a glimmer in the eye of Santa Monica city officials as early as 1989. That year they convened a group of citizens to advocate for purchasing a former Red Car right of way from downtown Los Angeles to Santa Monica. They envisioned providing a fast, comfortable, and green light rail line along this route.

Among that group was Darrell Clarke, who, growing up in Los Angeles, had often talked with his parents about that city’s large network of red and yellow streetcars and their demise in 1963. When, as a UC Berkeley student in 1974, Clarke rode the first public BART train from the East Bay to San Francisco, he thought about his hometown. Why, he wondered, couldn’t Los Angeles have great mass transit too?

The decades-long campaign to build Expo Line had begun.

Launched on the initiative of Santa Monica city council members Christine Reed and Denny Zane, the Committee to Preserve the Right-of-Way convinced Los Angeles Metro’s predecessor to buy this route, originally built in 1875 as a steam railroad by Santa Monica founder Senator John P. Jones. Dubbed the “Air Line,” it was later electrified and carried passengers until 1953 and freight until the mid-1980s. The freight train was noisy, and when the family of Presley Burroughs, another member of the Committee to Preserve the Right-of-Way, moved into a new home in Baldwin Vista in 1968, Burroughs – who would become an urban planner – remembers his father telling their new neighbors, “If you put passenger rail there, you’ll get a sound wall.”

But not everyone in Los Angeles wanted a passenger line on Exposition. Homeowners’ groups in Cheviot Hills and Rancho Park opposed it. That didn’t stop the Committee to Preserve the Right-of-Way. Clarke, Burroughs and Russ Davies, a retired IBM marketing manager, documented the economic and social sense of a light rail line on Exposition the line, and pleaded their case by petitioning door to door and tabling at shopping malls.

Planning began after the right-of-way purchase, then halted, then restarted in 1998 after the cancellation of new subway extensions left federal money on the table for mass transit to the Westside.

Meanwhile, then-mayor Richard Riordan and County Supervisors Zev Yaroslavsky and Yvonne Burke traveled in 1999 to Curitiba, Brazil, known for a successful Bus Rapid Transit (BRT) line. That trip planted the seed of Bus Rapid Transit in the heads of several key players in the city.

The following year, longtime community organizer Kathy Seal, facing both an empty nest and a growing concern about the environment, wondered if a light rail line to Santa Monica would help. “I was worried about the environment, especially climate change,” she remembers. “And personally, I couldn’t stand the traffic gridlock.”

“When do we meet?” Clarke answered when Kathy proposed starting a mass organization to fight for light rail on Expo.

Told about this idea, Kathy’s fellow community activist Julia Maher came on board. “We wanted to use the pressure of grassroots support to make the Expo line happen,” remembers Maher, who worked in her local neighborhood association and the newly-formed SoRo (South Robertson) Neighborhood Council. “I realized that a light rail line would change the way I felt about Los Angeles.”

Open to volunteers of any political persuasion, Friends 4 Expo Transit was born.

The group quickly attracted new activists, many of them women who were not typical rail buffs, but who emphasized the social and environmental impact of a future Expo line. “We saw this project as a way to bring people and communities together rather than dividing them,” remembers attorney Faith Mitchell (who’d married both Burroughs and Expo in 1994). She suggested “Connecting Neighbors” for the F4E slogan, as the activists pointed out the sociability of riding a light rail train, the boon it would provide for teenagers and the elderly, and the increased access for everyone – especially the disadvantaged and car-less – to the community’s valuable resources.

“We saw it as serving Westside and downtown jobs, a ladder of economic opportunity giving residents greater access to the rich economic, educational and spiritual centers throughout the Los Angeles region,” says Clarke. As fighting against climate change rose on the national agenda, the activists stressed the environmental benefit of clean, speedy, high-capacity light rail.

Outreach and Organizing: Solidifying the Voice of the Majority

Dozens of enthusiasts joined and Friends4Expo went to work, presenting slide shows to schools, senior centers, churches, a mosque, chambers of commerce, Rotary clubs, Neighborhood Councils, unions, and neighborhood groups flanking the right of way. They gathered thousands of signatures at farmers’ markets, neighborhood festivals, outdoor malls, and citywide events like the Los Angeles Times Book Festival. They lobbied Los Angeles, Culver City, and Santa Monica city council members, and members of the Metro board. Representatives of constituents along the proposed line took note. As one elected official told the activists, “You start the parade and I’ll walk in front of it.”

Which is what F4E did. In addition to their broad community outreach, which produced a long list of supporters, the activists reached out to community newspapers and met with the Los Angeles Times editorial board. Two community colleges endorsed the project, as did the Music Center and the University of Southern California. KNX 1070 radio and the Times editorialized in favor of light rail on Expo.

Relying on an email list of 2,500 and their website, F4E members brought supporters to attend Metro board meetings and public hearings, including one especially boisterous meeting in the spring of 2001 at the Veterans Administration auditorium. Ken Alpern, a leader in the Westside Village Neighborhood Association led a large crowd who testified, one after the other, that they wanted light rail on Expo. The huge and passionate support for Expo light rail surprised even the longtime activists, who for the first time sensed victory emerging: even if a minority feared it, they realized, the great majority of Angelenos wanted the Expo light rail line.

Although F4E concentrated on harnessing the enthusiasm of ordinary citizens, the activists also worked closely with allies among elected officials. Metro staff – used to fearful residents crying, “No, not in my community!” – gladly answered F4E’s requests for information. As Expo Construction Authority CEO Rick Thorpe would later say, “This is the first time in my career that I’ve experienced a group that is FOR something.”

Allied projects sprung up: bicycle enthusiasts lobbied Metro for a bike path and pedestrian walkway next to the light rail line. Jonathan Weiss, who’d belonged to the Committee to Preserve the Right-of-Way, tirelessly promoted the Westwood Greenway at the Westwood/Rancho Park Expo stop. Now under construction, that project will clean water before it reaches Santa Monica Bay.

But the idea of a Curitiba-style BRT still dominated some minds. A critical step for faster, cleaner, higher-capacity light rail was in March 2000 when Metro board member John Fasana amended a motion to only study Bus Rapid Transit (BRT) on the Expo right of way by adding Light Rail Transit. Despite then-mayor Riordan’s opposition, that amendment passed and the board approved the full motion 11-1. (The slower speed and lower capacity of the San Fernando Valley Orange Line BRT, which opened in 2005, would justify F4E’s preference for rail.)

On June 29th, 2001, after 56 people spoke in support, the Metro board unanimously approved the first half of the Expo Line as light rail from downtown L.A. to Culver City.

Friends4Expo members leaped from their seats in the board room and hugged each other with the joy of their victory. Their unifying message had won the day.

In 2003, the line gained further traction when then State Senator Sheila Kuehl introduced legislation to create a Joint Powers Authority (JPA) to award and oversee final design and construction contracts for completion of the line. Governed by a board of elected officials of the three cities along the line as well as the two county supervisors for the area, the JPA would prioritize and speed up construction as well as promote efficiency and community input, while keeping the project from getting sidetracked.

But despite approval of the segment from downtown L.A. to Culver City and the new JPA, a barrier to extending the line to Santa Monica remained: several homeowners associations for Cheviot Hills and nearby Rancho Park strongly opposed it (and would later fund a lawsuit against this second segment, as Neighbors for Smart Rail.)

At that time Friends4Expo member Karen Leonard, who belonged to the Light Rail Committee of the Cheviot Hills Homeowners Association (CHHOA), felt frustrated as one of only a handful of 30-plus committee members favoring Expo. When the committee chair ramrodded through a resolution against the line without notice or discussion, Karen decided to act. She founded Light Rail for Cheviot (LRC) in January of 2007, asking Sarah Hays, a pro-rail neighbor, to co-chair. Jonathan Weiss, who had long promoted the Expo Line in CHHOA, quickly joined and put up a website for the new group. It included data showing that property values along rail lines rise rather than fall, as opponents feared.

Following the example of F4E, the 35 LRC members did extensive grassroots education, organized neighborhood meetings, met with politicians and their staffs, and testified at relevant Metro board, school, and city council meetings. They wrote letters and emails to individuals, groups, and representative bodies and leafletted 1400 houses several times over the next few years.

They also prepared a packet for realtors working in Cheviot Hills, touting the many advantages of the rail line, and they set up a Facebook page, Hello Expo, to pump up neighborhood enthusiasm. To combat local opposition, they visited a school and a Buddhist Temple on the Eastside near the Gold Line to confirm that neither had problems with train noise. Most crucially, LRC succeeded in showing politicians that neighborhood support for the Expo Line outstripped the opposition.

Funding for the second segment remained shaky, but in 2008, building on the popular support developed for the Expo Line, Denny Zane – now leading the transit advocacy coalition Move L.A. – and then-assemblyman Mike Feuer proposed Measure R, to raise sales taxes to provide money for big ticket transit projects like Expo. It passed in the middle of a recession with a resounding 2/3 majority, clearing the way for the second half of the Expo construction – all the way to Santa Monica – to begin, with no need to wait for federal money.

Groundbreaking for the Santa Monica segment took place in 2009, and three years later the Expo Line opened from downtown L.A. to La Cienega Boulevard. Two months later the line extended to its current terminus at Culver City. The following year the California Supreme Court ruled against the Neighbors for Smart Rail lawsuit.

Expo Line ridership has exceeded expectations. Parking lots near rail stations are full to overflowing and riding the light rail line has afforded pleasure, comfort, and connection to hundreds of thousands of Angelenos, while safeguarding the environment.

Taking advantage of the many opportunities for democratic expression in Los Angeles, F4E’s dozens of volunteers played a major role in bringing tourists, business travelers, and the more than 800,000 people living within two miles of the Expo Line an alternative to our region’s world-record traffic. Residents and visitors will now enjoy a fast, comfortable, quiet, exhaust-free, high-capacity transit line—with landscaping, a bike path and public art— serving their economic and cultural needs from downtown to the sea. Community organizing won the day.