Home Housing Downzoning Won’t Save Your Neighborhood, But Smart Growth Just Might 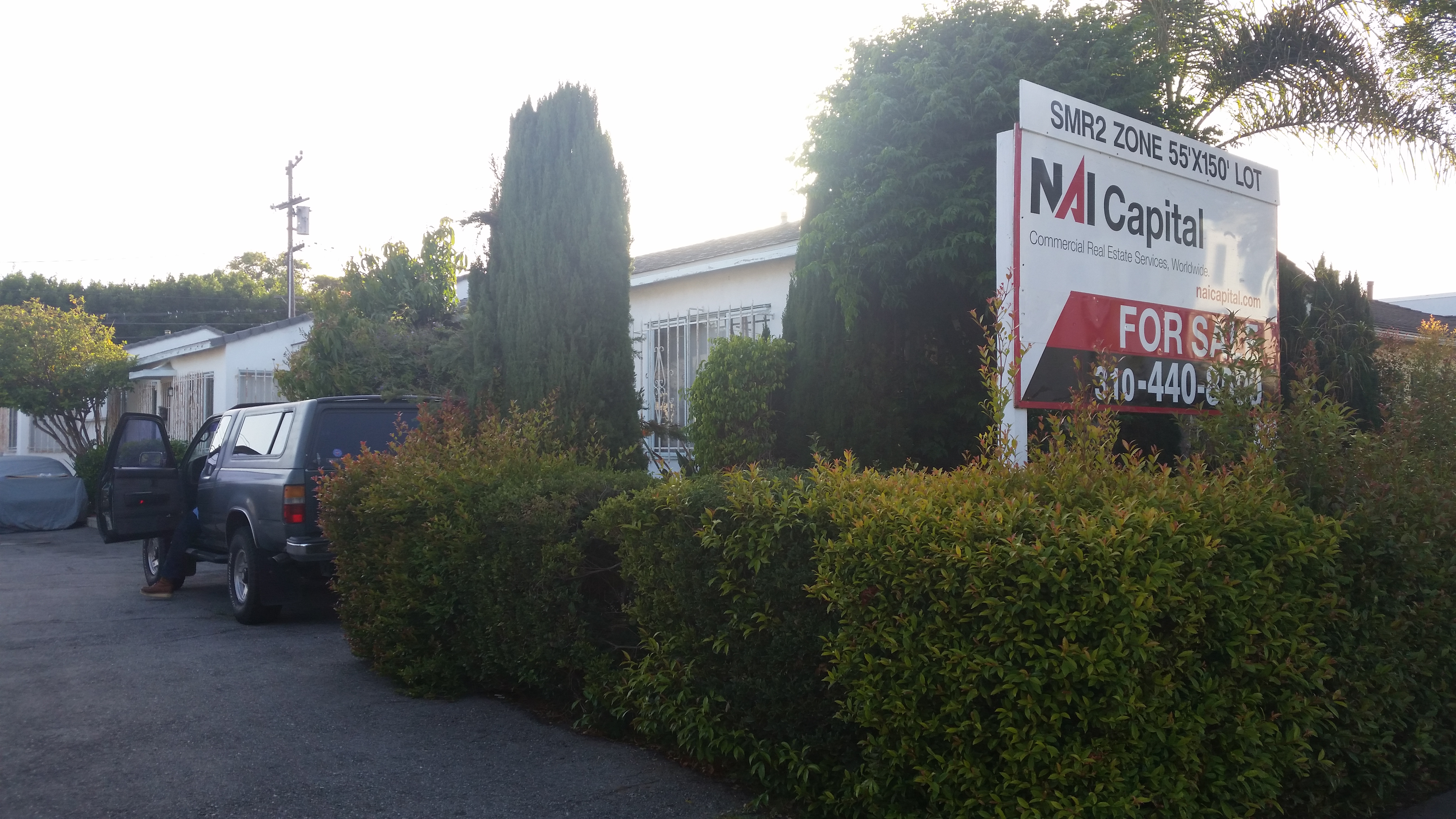 Just south of the intersection of Pico and 28th Street sits a small apartment complex. There are four bungalows stretching back from the street, lined up side by side.

On a Friday afternoon in late April, a man in a blue jump suit stood out front of the building, near his car. The man, who did not give his name, explained that he was visiting his son, who lived in the building. He also explained that the other three units were vacant and that the owner had paid those tenants to relocate.

Next to the man was a large, white sign that advertised the property was for sale and what the zoning was for the property. A little bit of research revealed that the property was listed on redfin.com, a popular real estate listing site, with an asking price of nearly $1.5 million for what is advertised as “vacant land.”

City officials noted that land is obviously not vacant. The four units have yet to officially be taken off the market and there are no demolition permits pending for the property, officials said.

The rent-controlled property — according to the Rent Board’s website, the last rents paid by the most recent tenants ranged from $630 to $1,434 a month — it seems is being marketed as a tear-down. With the property’s current zoning — SM R2 — prominently on display, the seller is making it very clear to any potential buyer what can be built to replace the existing four rent-controlled units without much hassle.

A small residential project, like a building with a few condos, for example, or a single-family home, would be easily permitted on the site, since the current zoning there allows for a 30-foot height limit (two stories) and up to four units (six if the developer provides onsite affordable housing). Similar such projects are happening all throughout the city.

According to the Rent Control Board’s 2015 annual report, published in March, Santa Monica saw a net loss of 28 rental units last year “as rent-controlled properties were removed from the rental market under the Ellis Act [a state law that allows property owners to take controlled units off the market] to make way for new condominiums and larger single family dwellings.”

The four units at 2248 28th Street, however, wouldn’t have been counted among those 28 because they have yet to be officially taken off the market, even though three of them sit vacant.

It is no secret that Santa Monica — and the greater Los Angeles region — is in the throes of a historic housing shortage that is driving up rents and land values. The property at 2248 28th Street is symptomatic of a larger problem: the growing demand for new housing in Santa Monica combined with the relatively slow rate of housing growth has begun to put real pressure on the city’s existing neighborhoods. As far as the seller of 2248 28th Street is concerned, the land is worth a lot more as a redevelopment opportunity than it is as its current use: rent-controlled apartments.

The City Council has recently made housing affordability one of its top five priorities. But it remains significantly harder to build new housing on the city’s old commercial or industrial properties than it is to redevelop a property like 2248 28th Street into a single-family home or smaller condo project.

About a half-mile away from the 2248 28th Street property, at Pico and Cloverfield, a proposal to replace an outmoded office park with a 150-unit mixed-use housing project was scuttled due to community opposition. Today, that site is being converted into a Whole Foods grocery store. Because of the zoning there, the Whole Foods plans didn’t require the same special approvals that were required to build a mixed-use housing project.

Walking the line of preserving existing neighborhoods, especially rent-controlled apartments, and accommodating growing demand to live in Santa Monica was central to the city’s award-winning Land Use and Circulation Element (LUCE), adopted unanimously by the City Council in 2010.

To prevent new housing from replacing existing homes, the city aimed to incentivize growth on commercial boulevards, in Downtown Santa Monica, and in the city’s formerly industrial Bergamot Area. The strategy has been borne out in other cities in California and has recently been touted by the Legislative Analyst’s Office as the only real viable option for preventing mass displacement in the long term.

Implementing that vision has proven harder than expected. The Pico/Cloverfield project was one of about a half dozen slated for non-residential properties that were stalled by community opposition in the last couple years. Since 2012, due to community opposition, Santa Monica lost out on the opportunity to add about 1,000 new homes in locations where none currently exist.

Considering that the city requires at least 30 percent of all new housing construction to be rented to lower-income households at lower rents, that those projects never came to be meant major lost opportunities to support affordable housing growth in the city.

Meanwhile, the California Department of Finance has noted that Santa Monica’s population growth from January 1, 2015 to January 1, 2016 was roughly only 0.6 percent, slower than the state’s overall population growth which was just under one percent. And it’s not because people don’t want to live in Santa Monica; with rental vacancy rates hovering around three percent, it’s clear the lack of growth is because there simply aren’t enough places to live (Santa Monica has seen net population growth of less than 10,000 since 1960, according to the U.S. Census).

As demand increases to live in Santa Monica, and housing growth fails to keep pace, it’s likely that the city will continue to see development pressures seep into existing neighborhoods where older apartments can be torn down and redeveloped as single-family homes or small condo projects, so long as they are under 30 feet tall. Or, older houses demolished to make way for bigger homes, a trend we already see taking off throughout the city.

Anti-growth activists have touted the recent Land Use Voter Empowerment (LUVE) initiative, which would require a popular vote on nearly every project over 32 feet, as a solution to these problems. However, since the vast majority of projects that replace existing housing are built within the zoning code and are below the 32-foot threshold proposed by the LUVE initiative, it’s likely of little comfort to the remaining family at 2248 28th Street.