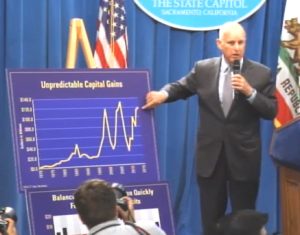 Governor Brown issued his May revision of the state budget proposal, and in terms of transportation, it’s pretty much the same story we told in January. That is, he proposes a variety of new revenues, including a “road improvement charge” and higher gas taxes, to fix California’s transportation infrastructure.

But the revision shows no fundamental change in thinking about transportation, despite the increasing realization in many quarters that we need to fundamentally shift the way people travel.

In Brown’s budget, money will still be allocated to “local streets and roads,” highway repairs, and trade corridors. Under the proposal, each of those sectors would receive an increase in funding from the new revenues. The governor also proposes using more money from cap and trade for transit, specifically an extra $400 million to the already existing Transit and Intercity Rail Capital Program, which provides money for capital (equipment, vehicles, track, and the like) but not for operations (to increase or improve service, for example).

And then there’s the still-undefined “Low Carbon Road Program” which Brown proposes allocating $100 million from cap and trade “for Caltrans to implement . . . local projects that encourage active transportation such as bicycling and walking, and other [undefined] carbon-reducing road investments, with at least fifty percent of the funds directed to benefit disadvantaged communities.”

It’s still not clear why this money isn’t being proposed for the already existing, already oversubscribed, highly competitive Active Transportation Program, which state agencies and advocates have already invested a lot of time and effort into creating and refining. And there’s still no indication of what those “other” road investments would be. Could repaving be considered a “carbon-reducing road investment”? Some would like to think so.

“We are disappointed that the Governor’s May Revised Budget reflects no changes to the proposed transportation allocations, despite the clear need to shift traditional transportation funding toward providing Californians better, safer, healthier, and cleaner travel options, especially for residents that can’t afford to drive,” said Jeannie Ward-Waller, Policy Director of the California Bicycle Coalition. “The Administration still directs the vast majority of the $16 billion for transportation to roads and highways, including $100 million of climate funds, with no new funds proposed for the state program dedicated to expanding walking and bicycling facilities.”

Brown’s basic message during his budget announcement was that while California has been doing well economically, given past fluctuations we’re due for a recession soon, and we need to prepare for it.

He said he expects there to be a “productive, substantive debate over the next month” to flesh out the details of next year’s budget. “The Special Session [which he called to solve the transportation funding crisis] is ongoing, and we’re committed to fixing our roads,” said Brown’s Finance Director Michael Cohen.

But that Special Session has not been able to produce any agreement about what our transportation funding should prioritize, and it’s not clear that Brown’s proposal is any closer to garnering agreement. And it doesn’t show an understanding of the need to change gears on how we travel.

A shift in priorities, towards transit and environmentally friendly travel options, is something the cap-and-trade money can support. Alvaro Sanchez, Environmental Equity Director for the Greenlining Institute, says that there is enough money to really make a difference.

“We don’t believe the Greenhouse Gas Reduction Fund needs a $500 million reserve, and want to see that money put to use to help communities that need both clean energy and jobs,” he said. “Specifically, we’d like to see $170 million to augment the Low Carbon Transit Operations Program and $150 million to augment the Transformational Climate Communities program, among other priorities.”

Meanwhile, in the budget, Brown also floated some interesting ideas about affordable housing, including legislation that would allow affordable housing developers to build multifamily housing without having to go through a conditional use permit process, which has been a way to slow down and stop many affordable housing projects. This is in line with a current bill from Assemblymember Richard Bloom (D-Santa Monica), A.B. 2522. In a statement, Bloom said, “California is facing an unprecedented housing crisis. Removing barriers to the creation of affordable housing is a key part of tackling that crisis and I am excited by, and look forward to, the Governor’s support of housing creation.”

And creating affordable housing near transit, which is emphasized by this bill, will also make it easier for people to travel without having to drive everywhere.

Both the budget Brown proposed in January and a summary of the May revision are available here.