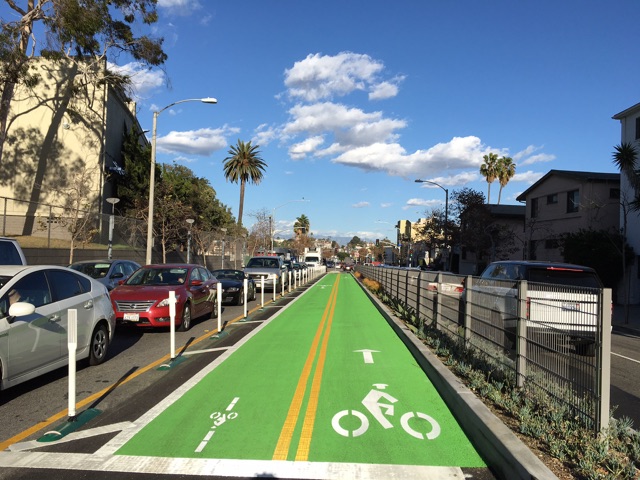 Santa Monica is on track to invest more than $10 million to make its streets safer over the next two years, according to the city’s proposed Capital Improvement Project (CIP) budget.

The money — which would come from a combination of local funding, including transportation impact fees paid as part of community benefits packages from recent development projects, and grant from the county and the state — will fund nine separate projects that will make it easier and safer to walk or ride a bike around town. The $10 million is a fraction of the city’s two-year, $235 million capital budget that funds 127 projects for “additional parks, improved mobility, and an array of investments to create a safer, more prosperous and more sustainable Santa Monica,” according to the budget document [PDF].

Among the nine projects are included a protected bike lane along 17th Street, major pedestrian improvements at four schools, better bike and pedestrian connections to Bergamot Station, crosswalk improvements, an extension of the Michigan Avenue Greenway east of the 10 freeway, and better connections to the beach bike path from the Pier.

“The city is actively making it easier for people to get around Santa Monica – to school, to work, to local stores, parks and social events. And to connect to Big Blue Bus, the Expo line, and Metro bus stops,” said Francie Stefan, Santa Monica’s Strategic Planning and Transportation manager.

Among the list of projects is included Santa Monica’s first north-south protected bike lane. According to the budget document, the project would cost about $3.5 million and “will provide bicyclists a physical separation from vehicular traffic” on 17th Street, providing connections from the Expo line station to Santa Monica College and two major hospitals in the area, according to the CIP budget.

The 17th Street protected bike lanes will connect to the Expo bike path, which also provides people a place to walk and ride bikes separated from vehicle traffic, the Michigan Avenue Greenway, which connects to Santa Monica High School, and the bike routes on Broadway and Arizona Avenue.

17th would be the third protected bikeway in Santa Monica, after the crossing at Pico Boulevard near the high school, and the Colorado Esplanade, which just opened to the public last Friday.

Also on the list is a $1.2 million plan to extend the Michigan Avenue Greenway east of the I-10 freeway and connect it to the Expo station at 26th and Olympic.

“[This project] will close a gap in the bike network and enhance pedestrian access by connecting discontinuous segments of Michigan Avenue across the I-10 Freeway at the 20th Street overcrossing and linking to the Expo Light Rail,” according to the budget.

The area around the 26th Street and Olympic — Bergamot Station — will also get some much-needed improvements. The budget include $2.8 million to add missing sidewalks along the north end of Olympic Boulevard and and both sides of Pennsylvania Avenue, missing pedestrian crossings, and a protected cycletrack along Stewart Street.

In order to improve safe access to four schools in the city, Santa Monica will about $1.6 million for a slew of safety improvements.

“This project will provide school access and safety improvements near John Adams Middle School, Lincoln Middle School, Will Rogers Learning Community, and Roosevelt Elementary. The crossing improvements include bulb-outs, high-visibility beacons and signage, striping, and operational changes to these schools. The improvements also remove crossing barriers and provide improved visibility and legibility for students and parents, making active transportation more comfortable for students and their families,” according to the budget.

“Funded projects like the crosswalk and sidewalk upgrades at Lincoln and John Adams middle schools, and Roosevelt and John Muir elementary schools help to make our neighborhood streets more accessible to people of all ages,” said Stefan.

“Other projects like pedestrian and bicycle upgrades to 17th Street will improve access to transit systems like Expo Light Rail and Big Blue Bus,” she said.

She also noted that the benefits of improving the streets reach further than just making it easier to bike and walk.

“These projects are key to the City’s Wellbeing and Sustainability initiatives, providing support for people to get more exercise and time outdoors while also reducing their carbon footprint.  Improving the streets and sidewalks for active transportation and transit supports the Council’s Strategic Goal for Mobility, which also recently launched the GoSaMo campaign,” she said.

GoSaMo is the new campaign launched by Santa Monica to coincide with the opening of the Expo light rail on May 20. GoSaMo is an informational campaign designed to show people their options for getting around the city.

The budget includes about $300,000 over the next year for the city’s ongoing crosswalk renewal project, through which the city restripes and updates older crosswalks throughout Santa Monica. Between 2016 and 2018, the city anticipates it will “restripe 148 crosswalks across 62 intersections,” according to the budget.

The budget also allocates about $1.2 million spread out over the next five years to begin implementing priority projects related to the city’s Pedestrian Action Plan, which the City Council unanimously in February.

It’ll be easier to get to the beach bike path from the Pier thanks to a $1.3 million allocation — 80 percent of which will be funded by Metro — that will build “a new bicycle connector ramp” from the Pier Deck to Beach Bike Path.

“This project improves pedestrian and bicyclist linkages along a 0.2-mile segment of 4th Street to support safer first- and last-mile access and connectivity to the Expo Terminus Station, Downtown, Civic Center, and other local destinations,” according to the budget.