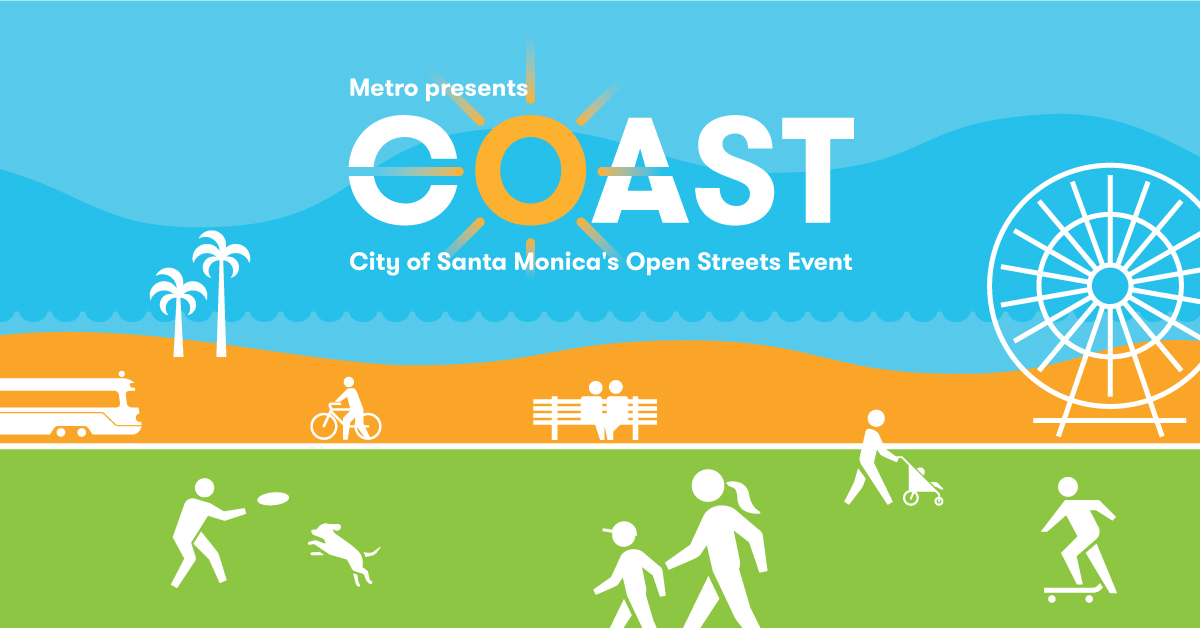 Santa Monica is getting ready for its first open streets event, Coast, this Sunday, June 5.

From 9 a.m. to 3 p.m. about two miles of streets will be closed to automobile traffic, freeing up the space for people to explore the city on foot, by bike, skateboard, or other means.

“It’s not a race or a sporting event and there’s no start or finish, and no right way to do it. You can come for an hour, walk a block and sit down at a cafe, or ride your bike from end to end,” according to the event’s Facebook page. The event is presented by Metro and is being produced by Community Arts Resources (CARS), which has produced the Santa Monica Festival since 1992 (this year, Coast is taking the place of the Santa Monica Festival). CARS also produces CicLAvia, perhaps the most well-known open streets event in the region.

The city’s website for the event goes into more detail about the event:

“This local event transforms our streets into a park for the day – with music, restaurants, shops, dance and games with family and friends,” according to the city’s website for the event. “Stroll with Samba dancers, picnic, and feel the breeze as you move through the streets! Explore the interactive Coast Zones celebrating culture, sustainability and mobility, as well as other attractions along the route.”

A two mile long route is shorter than other open streets routes in nearby cities, which have tended to feature five to 10 (or more) miles. The shorter Coast route may favor pedestrians, forming something more akin to a giant farmers market than a bicycling festival. While Santa Monica’s open street event will be shorter than other similar events, like CicLAvia, it will be jammed packed with activities.

As you can see from the map above, the route runs from Wilshire Boulevard to Marine, where Santa Monica borders Venice. The route runs down Ocean Avenue between Wilshire and Colorado, then cuts over to Main Street. As you can also tell from the map, Downtown Santa Monica is kind of saturated with parking, but the city is actively encouraging people to arrive by means other than cars, especially since the route connects directly to the new Downtown Santa Monica Expo station.

Along the route, people can expect to see about a dozen different performances by pianists, poets, skaters, DJs, and more. There will also be multiple hubs set up where people can learn about the many things the city has to offer. For example, at the Main Street and Norman Place hub, visitors will get a chance to visit the local library and the Santa Monica Conservancy’s Preservation Resource Center. There will also be workshops at the nearby community gardens throughout the day and extended hours for the local Farmers Market.

At the Mobility Zone, visitors will be able to learn all about the different things the city is doing to encourage people of all ages to go multimodal, including Santa Monica’s new GoSaMo initiative, which aims to educate people about their transportation options.

The city’s website reads: “The streets of Santa Monica belong to everyone — not just drivers, but bikers, pedestrians, and hey, maybe even hoverboarders. Come visit this Zone for great music, free bike repairs, information on Santa Monica’s revamped bike lanes, bike share and redesigned bus system, a helmet decorating workshop for children, and so much more. And did we mention there will be ice cream?”

You can read all about the other zones — Culture Zone, Sustainability Zone, and City Zone — in greater detail here.

Throughout the route, local bike shops and the Santa Monica Center, will be offering bike repair. Of course, the city is encouraging people to arrive carfree by using buses, bikes, and the newly-opened Expo line Downtown Santa Monica station. People arriving on the Expo line will arrive at the eastern end of the Colorado Esplanade, which will be a Pedestrian Zone for the day.