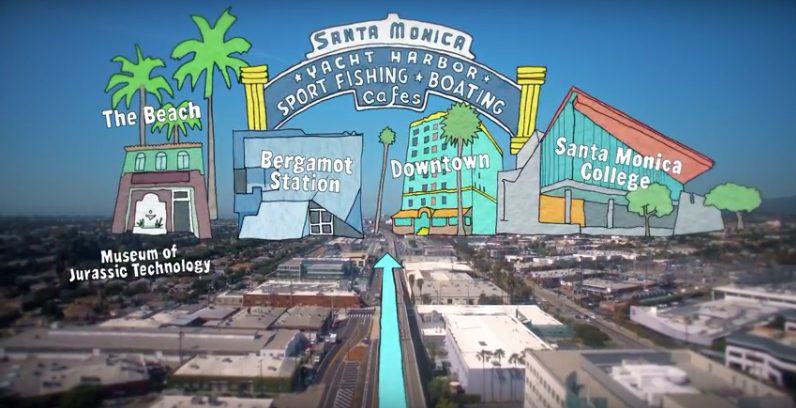 About half of the seven new stations along the 6.6-mile Expo line extension from Culver City to Downtown Santa Monica run through Kuehl’s district.

As a press release from her office said, “Kuehl returns to her comedic acting roots to promote Expo extension.”

The quirky minute-long short features Kuehl — who, as a child, played Zelda Gilroy on the television show, “The Many Loves of Dobie Gillis” — alternating between two modes of travel: riding the Expo train and driving.

The best part — after the entertainment value, of course — is that it highlights, in a fun way, the real benefits of having a train to the jobs-rich Westside: it will give people a reliable, environmentally friendlier, and less expensive alternative to sitting in traffic.

The video also demonstrates what we shouldn’t expect Expo to do: make it easier for people to drive.

As Kerry Cavanaugh with the L.A. Times wrote last year: “It’s time to stop measuring the value of public transit in terms of how it affects freeway traffic. Nor should politicians or advocates pitch public transit as the solution to freeway congestion, as they did in 2012 when promoting the Measure J sales tax extension… As Metro considers a new half-cent sales tax measure, county leaders ought to consider better ways to sell voters on the benefits of investing in public transit. To start, building more rail and bus lines gives commuters realistic transportation alternatives to sitting in a slow moving car. It can allow people to forgo the expense and responsibility of owning a car. Transit projects can spur community reinvestment and economic development. And, having a robust public transportation system is the hallmark of a major city.”

Kuehl’s new video sums up that point in an entertaining and accessible way.