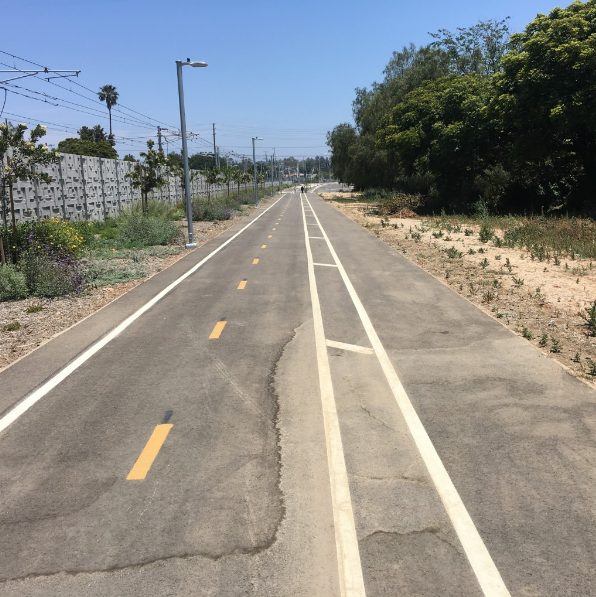 …if they every finish it.

Advocates for a bicycle path to run parallel to the recently-opened Phase II o the Expo Light Rail Line have long-contended that the Exposition Construction Authority viewed the fully-funded separated bike path as an afterthought. The bike path, which officially opened with the rail line on May 20, is a huge step forward for bicycle mobility.

Let’s be clear: the bicycle path is a huge upgrade, and Streetsblog and Next have both received many emails praising the path. However, that being said, there’s still work to be done. And with the Expo Construction Authority closing shop, it’s going to be up to the City of Los Angeles and the City of Santa Monica to finish the job.

After the jump are 11 suggestions with pictures and video illustrating what needs to be fixed before the bike path can really be considered completed. This list only includes the path between its two termini: Overland Avenue in Los Angeles on the east and 17th Street in Santa Monica on the west.

There is no signage at either end of the bike path – And when I say “no signage,” I mean literally not one sign that says the bike path ends. There also aren’t any signs directing bicyclists toward a safe route to continue their ride. If, while riding west, you look back over your shoulder at the Santa Monica terminus, you can see a sign that says “bike path begins.” That’s not enough.

At Overland, the problem is worse, because the only directional arrow points riders south on Overland, but that arrow isn’t for riders heading off the path; it’s supposed to direct people coming from Cheviot Hills toward the path.On the Santa Monica side, some basic signage in the area and directions to the bike lanes that will get people to the beach, MANGo, Santa Monica College, and other destinations is sorely needed.

Hopefully this is high on the check-list for GoSaMo, the city’s new educational initiative designed to get people to consider their transportation options before defaulting to driving everywhere.

One reader suggested that there should be some attractive gates marking the start/end of the path in the design of the Santa Monica Pier sign to give a sense of destination and local flair to the path. I like this idea, but I want the other 10 things on this list addressed first. There aren’t even street signs at every intersection – There aren’t a lot of connecting streets with bicycle lanes on them — more on this later — so there will be bicyclists entering and exiting the path at many different intersections. The fact that not every crossing has a road sign indicating the name of the cross street is going to lead to confusion for many new trail users who are trying to get from one place to another, unless their destination is on one of the major cross streets.

Speaking of signage, there are confusing intersections that could use some help directing people where to cross – The Pico/Gateway/Exposition intersection requires people cross the street three separate times in three different crosswalks in order to continue on the bike path. Bicycling east, there is one sign directing bicyclists to turn right, even though there are two ways to turn right next to the sign. Some basic signage with a diagram would be tremendously helpful for the intersection.

The crossing at Olympic Boulevard in Santa Monica requires bicycling onto an island before continuing on the trail. I’m guessing it’s too much to ask for the signals to be timed so that cyclists can just go straight across, although it really shouldn’t be. Assuming that, another diagram making the crossing clear would be helpful and safe. Signage that does exist is sometimes confusing or wrong – There are signs directing pedestrians to the sidewalk in areas where the path isn’t wide enough to be a mixed-use path. Unfortunately, sometimes people think the sign is just directing them to the left of the bike path. Near the intersection with Olympic Boulevard going east, I did find a sign noting that the bike path has ended. At this intersection, it has not. Going west, there is a sign showing bikes with a left arrow. It is meant to mean bikes stay left after going straight into the narrow alley, so pedestrians can keep to the right.  However, I’ve witnessed more than one bicyclist turn left onto Olympic Boulevard. How about some signage for cars – Throughout my three trips on the Expo Bike Path for this story, I didn’t see one sign at an intersection reminding cars that they are crossing a bike path. I did see a handful of signs reminding bicyclists to share the path with pedestrians, which is fine. However, the rate of bicyclists crashing into and killing or seriously harming a pedestrian is much lower than the rate of bicyclists or pedestrians being hit and killed by cars. Connectivity to the bike path is questionable, especially in Los Angeles – There are no bike lanes connecting to the bike path east of Stewart Street in Santa Monica. There are no bike lanes connecting to the bike path in Los Angeles. This is not the Expo Construction Authority’s fault, but it is a major failure by the City of Los Angeles, in large part because of the anti-safety obstructionism of Councilmember Paul Koretz. The Santa Monica City Council recently signed off on about $10 million for street safety improvements, including a separated cycle track on 17th Street. Once its finished, cyclists reaching the western terminus of the Expo bike path will have a visible and safe route north and south from the bike path, but, like I said above, signage is essential to make sure people know how to get where they are going. Some intersections don’t seem designed for bicyclists – Throughout the Los Angeles part of the bike path, there are no sensors to trigger the crossing. Instead, bicyclists are expected to push the beg button and wait for a signal.While it’s great that the intersections have ADA compliant ramps heading into the intersections, having a one-cut angular curb-cut forces bicyclists to ride out at an angle that may expose them to traffic before aligning again with the bike path. Second, the bumpy texture of the yellow area marking the curb cut is not exactly a friendly surface to bike over.

Sensors don’t work everywhere – I sat with my bike on the bike marking at Olympic Boulevard heading west for 150 seconds before someone hit the beg button across the street. Emails have shown similar complaints from bicyclists at other intersections, including the bike sensors going east at the same intersection.

No bike path markings at stations – When bicyclists approach any of the stations, the bike path markings disappear. My notes from the Expo Bicycle Advisory Committee remind me that this was done because the designers were worried that with the path markings bicyclists would cross through the station area at higher speeds, endangering pedestrians. My notes also show that the committee managed to beat back a proposal to make every station a mandatory dismount zone.However, without the markings there is going to be some confusion as to what bicyclists are supposed to be doing. In Santa Monica, it is illegal for a bicyclist to ride on the sidewalk, so without path markings it is technically illegal to ride a bicycle parallel to any of the three stations in Santa Monica where the markings disappear.

Why don’t the signals tell people to cross when the train is running parallel next to them? When the gates are down, the parallel walk/bike sign should automatically be “on.” This is basic and an easy fix. Sensors sometime force bicyclists to completely block the sidewalk – Yes, my cargo bike is larger than an average bicycle, but the scene above would be even worse with a family of bicyclists using the trail. And, since the sensors seem to be hit or miss, bicyclists might be waiting for awhile, obstructing pedestrian cross traffic for much longer than necessary.