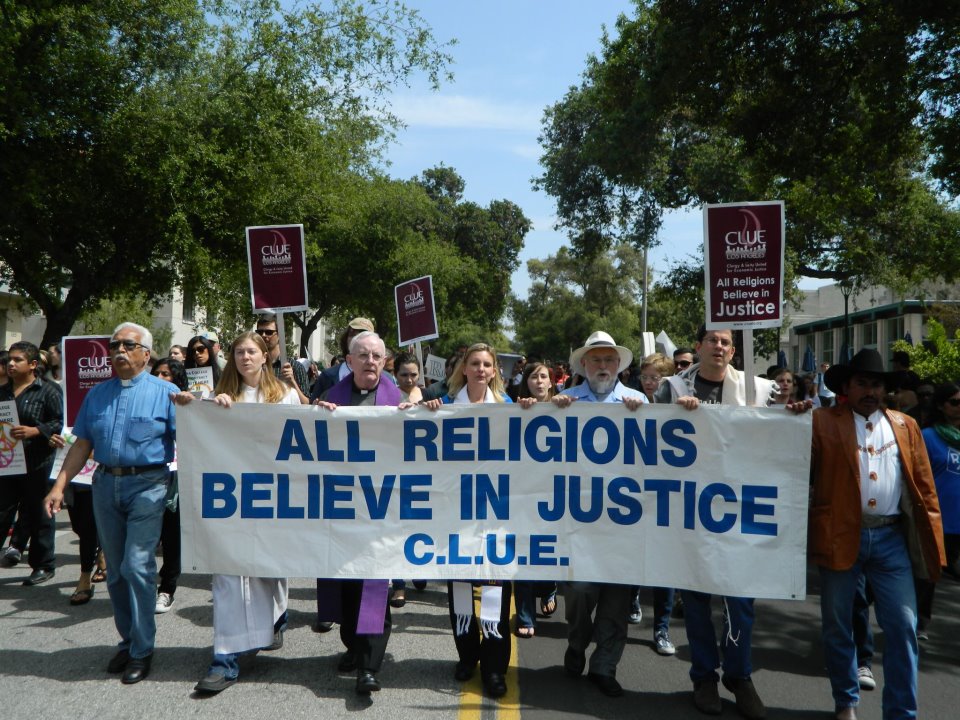 Over the course of two meetings and after extensive research, CLUE members decided to oppose the L.U.V.E. initiative, which would require nearly all new projects over 32 feet (or two stories) tall go to a public vote, “on the grounds that it does not alleviate the traffic problem, but it does create additional barriers to housing, ethnic diversity, and economic justice,” according to a statement drafted at the meetings. The decision to oppose and the statement were both unanimous of the roughly 20 people in attendance, officials said.

“CLUE’s mission from the very beginning was about economic justice,” said Rabbi Neil Comess-Daniels of Beth Shir Shalom in Santa Monica. Comess-Daniels, who is on CLUE’s resource committee, was among those who helped found the organization about two decades ago.

Along with concerns about sustainability, a major concern driving CLUE’s decision to oppose the L.U.V.E. initiative was whether or not it would affect if people can afford housing in Santa Monica, he said.

“We are extremely concerned, especially with the Metro coming in, that people who work in Santa Monica are able to live in Santa Monica,” said Comess-Daniels.

“What’s best for the city is to grow into its future with a multi-layered population that will include many of the people who work in Santa Monica, rather than have them economically boxed out,” he said.

While the L.U.V.E. initiative exempts 100 percent affordable housing projects with fewer than 50 units from its extreme restrictions, it does not specify how those projects would be funded.

Currently, the city’s main source of creating new affordable housing — housing that rents below market rates to households earning 80 percent of the area median income or less — is by requiring market-rate housing developers to include affordable housing as part of new projects. The most recent example of that was the 500 Broadway project, which included a 64-unit, 100 percent affordable building as part of the approval. Both buildings would be unable to be built without voter approval under the L.U.V.E. initiative.

Residocracy founder and vocal proponent of the initiative, Armen Melkonians, recently testified at a City Council meeting in opposition to a new housing project that included 64 units of affordable housing.

Yet, with Santa Monica’s vacancy rate for rental well below five percent and rents continuing to rise, anyone who is trying to move to — or within — the city would likely argue otherwise. A recent report by the Legislative Analyst’s Office in Sacramento, a nonpartisan advisory office that provides lawmakers with policy and budget analyses, lays out the problem very clearly: housing in coastal California is expensive because there simply isn’t enough of it.

“We need housing, and we don’t need more developer influence on our politics,” McKeown told Next in an email in March about Council opposition to the initiative.

Just last week, the Southern California Association of Nonprofit Housing came out against the initiative in a letter that expressed similar concerns to Comess-Daniels’ and CLUE’s.

“Initiatives that add cost and complexity to projects are not the answer to addressing the regional housing affordability crisis or to reducing traffic and congestion,” SCANPH Executive Director Alan Greenlee wrote in the letter to the Council, dated June 20, 2016 [PDF].

Comess-Daniels also expressed a concern similar to one that Councilmember Kevin McKeown has raised, that by requiring elections for nearly every project, Santa Monica’s development decisions will no longer be a community-driven process.

Some housing that is going to be built needs to be set aside for affordable housing, senior housing, and for people on limited incomes, he said.

“That needs to be a process that is a completely open process and that isn’t only catalyzed by people who are constructing buildings here,” Commes-Daniels said, referring to the fact that under the L.U.V.E. initiative the projects that will come forward are the ones developers want to put on the ballot, not ones that the community has vetted through lengthy processes.

Comess-Daniels also sees the issue of access to affordable housing for lower-income people and having an open community through the lens of his faith.

“From a Jewish point of view, on our holiest day of the year [Yom Kippur], we are mandated to take the poor into our homes,” he said. “From my religious standpoint, it’s not just nice, it’s an obligation.” Comess-Daniels said that the organization will likely discuss its opposition to the initiative as part of its forum later this year about religious values and how they intersect with voting.

CLUE is the most recent community organization to come out against L.U.V.E. since the initiative qualified in May to be on the November ballot. The League of Women Voters of Santa Monica also opposes it.

The Santa Monica City Council voted earlier this month to have staff study the initiative. The study will come before the Council on July 12 and at that meeting, the City Council will have to decide whether to put the initiative on the November ballot or to adopt, as is, into law.

Note: This publication’s steering committee has voted to take an editorial position against the Residocracy-backed L.U.V.E. initiative.