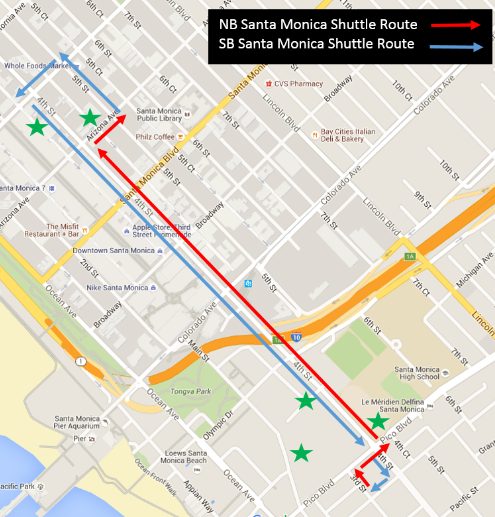 In order to make it easier to get to the Twilight Concert Series this summer without driving, the Big Blue Bus is making a few changes.

The local transit agency will be rerouting several of its bus lines in order to avoid getting stuck in traffic in Downtown Santa Monica between 5 p.m. and approximately 11 p.m. every Thursday evening until September 8, 2016.

During those times, the Big Blue Bus will offer a free shuttle into the downtown from the peripheries.

These lines will not continue into the core of downtown as they normally do. Instead, passengers wanting to continue to into the heart of downtown will disembark and board the free shuttle. Big Blue Bus employees will be present to assure smooth transitions.

Getting to the Twilight Concert Series without driving is easier this year than it has every been.

If you are coming from a place that’s not near an Expo line station, chances are you are near a Big Blue Bus stop, and the Big Blue Bus connects to the Expo line at the Westwood, Bundy, 26th Street (Bergamot), and 17th Street stations.

The reality is that, here in Santa Monica, we have options. So why get stressed out sitting in traffic in a car when you could take a bus, a train, a bike, your own two feet, or any combination of the above and skip the headache? It will certainly make the concert going experience better for you.