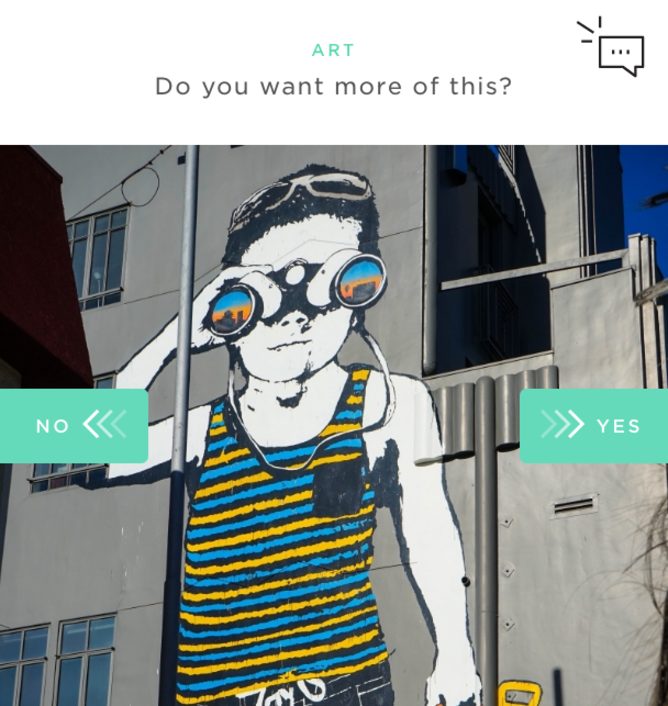 Downtown Santa Monica, Inc. wants to know what you love — and what you don’t — about the beachside city’s thriving urban core.

To that end, the nonprofit that manages Santa Monica’s downtown area is employing a new digital tool, CitySwipe, that lets users swipe left or swipe right (ala dating apps like Tinder) to weigh in on their favorite and not-so-favorite things about Downtown Santa Monica.

The new tool is designed to make it easier to get feedback about the downtown as city planners work to update the Downtown Community Plan (DCP), a document that will guide the future of the city’s downtown for the next 20 years. It’s the blueprint for improved mobility, a wider-range of affordable housing options, better public open space, and many other things that go into improving Santa Monica’s downtown.

“With a document like the Downtown Community Plan, which has the potential to dramatically change Santa Monica’s living room, it is critical to gather as much feedback as possible, giving residents, property owners, Downtown employees and our visitors ample opportunity to weigh in and make sure their voices are not ignored,” said Kevin Herrera, Downtown Santa Monica, Inc.’s senior communications manager.

“The reality is that in our fast-paced world, where we are constantly being inundated with emails, social media alerts and other distractions like Pokemon Go pings, we at Downtown Santa Monica Inc. needed to find a way to get people’s attention, so we looked to popular apps for inspiration and came up with CitySwipe,” he said. “It’s something different and makes people think about complex urban planning concepts in a way that is fun and easy to digest.”

Herrera encouraged anyone to give it a try at DTSMCitySwipe.com. The instructions are pretty simple. For “yes or no” questions, you swipe right for “yes” and left for “no.” For questions that ask you to choose a preference, you simply swipe in the direction of the photo you prefer. If you want to leave more substantive comments, simply click on the chat icon in the upper right hand of the screen.

“People seem to be very excited about using CitySwipe. Once they started swiping you could tell that they were enjoying it. It’s easy and you get to give your opinion, and who doesn’t like to do that?” Herrera said. “As we go forward we will continue to update CitySwipe by adding more questions and features as new issues arise in our community. We see CitySwipe as an essential tool.”

While planners had originally hoped to complete the Downtown Community Plan by this summer, city officials decided in April to extend the process in order to have more time to include a broader voice.

“While a lot of people see eye-to-eye on many things in this long-term vision, there are still a number of outstanding issues that we need to drill into to understand where we can build consensus,” said Principal Planner Peter James, one of the team members working on the DCP project.

Downtown Santa Monica — the area north of the 10 Freeway, south of Wilshire, east of Ocean Avenue, and west of Lincoln Boulevard — is a unique place within the beachside city. It is the most transit-rich area in the city, served by both Metro and Big Blue Bus and the Expo light rail. It is one of a few places in the city (besides commercial boulevards and the Bergamot area) where new housing can be built without displacing existing housing. It is also the neighborhood in Santa Monica with the most mix of uses, which makes walking and biking between destinations easier.

In April, Senior Planner Travis Page emphasized the need to hear from a wide range of people in the community and that the new outreach schedule would allow for many opportunities to weigh in that would fit into as many people’s schedules as possible.

While CitySwipe is part of Downtown Santa Monica, Inc.’s own effort and independent of the city’s outreach, Herrera said he hopes the CitySwipe tool will help “gather important feedback from our stakeholders that we can present to the City Council and city planners.”

He also hopes it will help raise awareness about Downtown Santa Monica, Inc. and all the work the nonprofit does to keep the thriving district running smoothly.