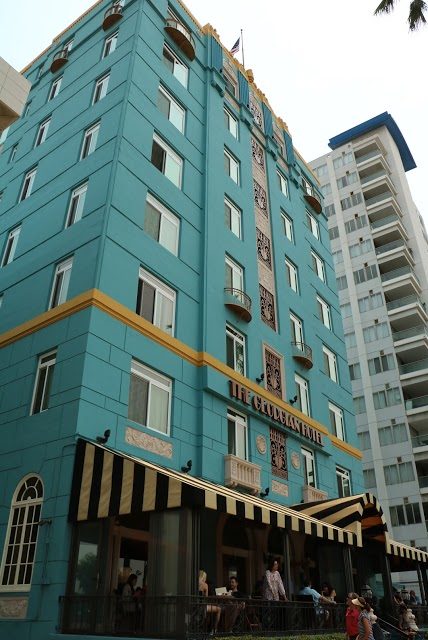 The oldest building in Santa Monica sits in the heart of the city’s downtown. The squat and unassuming brick structure, sandwiched between a youth hostel and an Italian restaurant, doesn’t look like much.

But more than a century ago, when Second Street was Santa Monica’s busiest thoroughfare, the nondescript building served two indispensable functions for what was then the brand new seaside city: it was City Hall and it was a saloon.

Early Saturday morning about two dozen people gathered in front of the old building — known as the Rapp Saloon, though alcohol is no longer served there — for a two-hour tour through the history of downtown Santa Monica led by volunteers from the Santa Monica Conservancy, which hosts weekly tours. Saul Rubin took one of the tours in 2014 and reported on it for Santa Monica Next.

But this time, the tour was slightly different. Our guides weren’t only taking us through the — sometimes wild — past of Santa Monica, but also looking to the future.

Saturday’s tour was one of three — the next two are both on Saturday, July 30 and there are still spots available — tours that the Conservancy is doing in partnership with the city and Downtown Santa Monica, Inc. to help with outreach for the Downtown Community Plan, a comprehensive document that will guide the future of the city’s downtown for the next 20 years.

And while the era of gunslinging, speakeasies run by unscrupulous characters — at one point, the tour ended up in one such speakeasy once run by Bugsy Siegel, the infamous mafia boss known for his role in establishing Las Vegas as a major pleasure center — and celebrities hiding out in the beachside city to get away from the paparazzi are long gone, there are still many lessons to be learned from the buildings and the streetscapes left over from those days.

On the tour, the guides take the crowd through the fascinating history of the downtown. There is the Rapp Saloon, built in 1875, where, the story goes, an Australian sailor hard up for cash was unable to pay his tab. So, instead, he gifted the barkeep a Moreton Bay Fig sapling instead. That sapling found its way to the wife of Senator John P. Jones, one of the city’s founders. That tree, a century later, is a historic landmark and iconic centerpiece on the Fairmont Miramar property, formerly the site of the home of Senator Jones and his wife.

Then, there is the 12-story clock tower, built in 1929, despite some opposition by local naysayers who worried it was too tall for Santa Monica. Today, it’s one of the city’s most recognizable landmarks.

At the corner of 4th and Broadway, there’s the Builders Exchange building, where in 1929 — two years after it was built — a young cartoonist invented a new character in one of its offices. The character, a one-eyed sailor with a penchant for smoking a pipe and eating spinach, was based on a fisherman the artist knew to hang around the Santa Monica Pier.

Then, there is the Georgian, built in 1931 complete with a speakeasy in the basement that was a hotspot during the latter years of Prohibition. Some say, at night, though the space hasn’t been used as a bar for decades, save for the occasional private event, you can still hear the faint din of laughter and clinking of glasses coming from the basement.

There is another story that the buildings tell and that is one of an evolving urban space. This past Saturday, the tour deviated slightly from its usual route and made a stop at 5th Street and Santa Monica Boulevard.

On the south side of the street, Santa Monica City Planner Travis Page directed the group’s attention to the way the ground floor of an early 20th century building interacts with the sidewalk. Doors to small shops and restaurants open up directly to the street, inviting people walking by to look in.

Then, the group took a look across the street at a couple buildings designed in the era of the automobile: entrances set far back from the sidewalk with concrete barricades separating the building from the street. The buildings both had only one use on the ground floor, in this case both banks, and offered little to passers-by with which to engage.

The Downtown Plan, Page noted, will set standards for new buildings so that their ground floors will activate the sidewalk, as much of the historic buildings in the downtown core already do, instead of repeating the mistakes of anti-pedestrian designs from the 1970s and 1980s.

It’s just part of how the plan hopes to preserve the historic character of downtown while planning for the future.

Participants in the tour were also invited to an upcoming workshop in August to discuss exactly that issue: Preservation and Change.