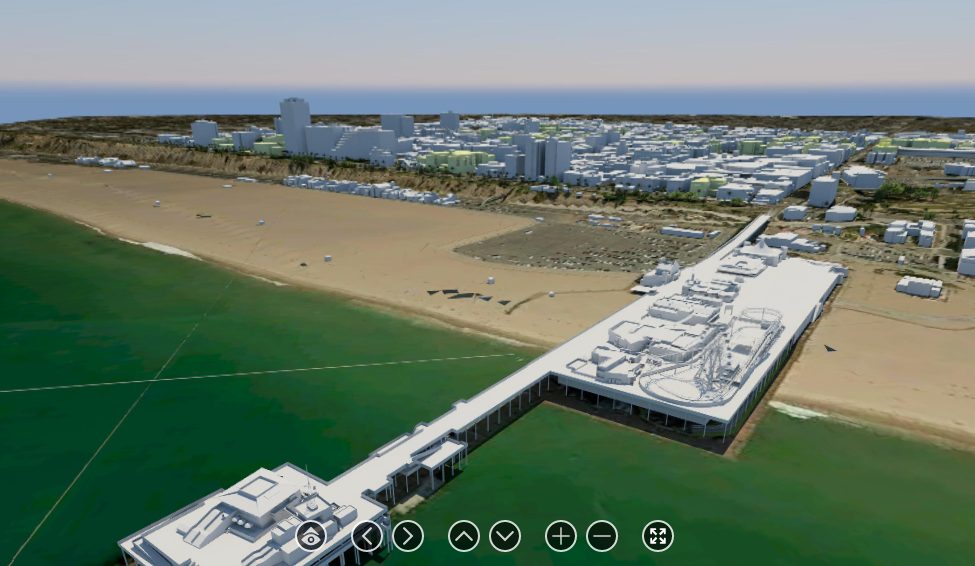 The new online tool lets visitors see which properties are likely to redevelop in the next 20 years and explore three dimensional renderings of potential new buildings’ heights and densities based on the standards proposed in the pending Downtown Community Plan. Yesterday’s unveiling comes just a few days before the city’s workshop and panel discussion, Preservation + Change, tomorrow.

“This ‘build-out’ analysis offers a growth expectation that is tempered by a review of land use trends and real estate and market reports to understand the realistic demand for new office, residential, and retail/hospitality uses in Downtown Santa Monica,” city officials said in a press release Tuesday.

This new tool is part of ongoing outreach city officials are doing for the Downtown Community Plan, which is expected to go before the City Council for approval early next year. The plan lays out the guidelines for how the downtown will change — and what will be preserved — over the next two decades.

The analysis used to create the online tool is required for city plans to do as part of the environmental impact review of the proposed plan. However, it’s rare that this kind of information is made so publicly available in a way that makes sense to the average lay person, largely due to complex nature of much of the analysis.

Planning Manager Jing Yeo, however, walked the audience Thursday through the numerous assumptions that go into figuring out which properties are likely to redevelop and which aren’t. The tool also allows people to click on individual parcels to see specific information about the property, including the assumptions made by planners about their viability for redevelopment.

Using a combination of field surveys, interviews, county assessor data, the historic resources inventory list, long-term lease information, and market demand analysis, Yeo said, planners are able to estimate which properties will are unlikely to be redeveloped within the 20-year span of the Downtown Community Plan. For example, a property that has already recently been renovated or redeveloped won’t likely change in the next two decades. Nor are properties like 100 Wilshire because the expense of redeveloping vast outstrips the financial benefit since such buildings couldn’t be rebuilt at their existing heights and densities under the new plan.

The conversation about the Downtown Community Plan will continue Saturday at the city’s panel discussion on Preservation + Change. The discussion is the culmination of several weeks of outreach during which city officials teamed up with the Santa Monica Conservancy to do walking tours of Downtown Santa Monica to discuss the area’s historic character and the steps the Downtown Community Plan would take to balance the need for preservation and the need for change and improvement.

The new Downtown 2030 build out simulator is available to the public on the city’s website, downtownsmplan.org. Saturday’s workshop and panel discussion, Preservation + Change, is Saturday from 10 a.m. to 2 p.m. at the Santa Monica Bay Women’s Club. It’s free and open to the public. For more information and to RSVP, click here.