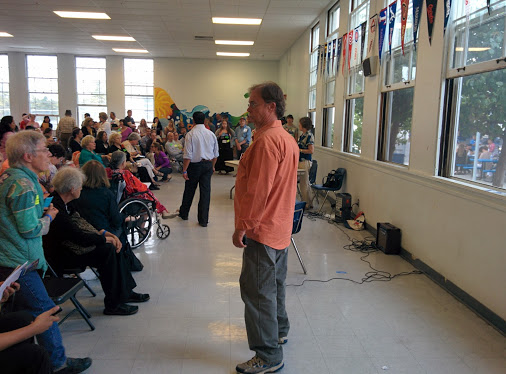 Santa Monica Next received the following opinion piece with a specific request that we not use the writer’s name. After a back and forth, we consented to publish it because the author feared reprisal, both professional and personal. We are printing this letter after brief consultation with some members of our Steering Committee because it is an example of how difficult it can be for people to get involved with politics, especially younger or newer people, when so much of the local mood can be hostile and by design more difficult for younger residents to be involved. We did confirm that the author was present at Sunday’s endorsement meeting for Santa Monicans for Renters’ Rights. – DN

UPDATE, September 5 : An earlier version of this story stated that Councilmember Sue Himmelrich opposes Measure LV. The text has been corrected, Himmelrich has declined to endorse or oppose the ballot measure.

After sitting through my second Santa Monica for Renters’ Rights (SMRR) Convention, I could not stop asking myself the same questions over and over: Is this really happening? How could SMRR, the “renters’ rights” organization widely considered to be the most influential in Santa Monica politics for the last 30+ years, really be this dysfunctional, disorganized and dishonest?

For anyone unfamiliar with the SMRR endorsement process, the annual convention “provides the opportunity for SMRR members to determine which candidates for local office and which local ballot measures will receive the support of the organization in the November election campaign.” To be eligible to vote at the convention, you must satisfy two simple requirements: your 2016 SMRR dues ($35) must be paid and you must be present.

[pullquote align=left]
Did the co-chair really just say that the democratic process should stop so that the steering committee could support her preferred candidate?
[/pullquote]Unfortunately, satisfying those requirements is not as simple as it sounds. Unlike almost every other nonprofit organization in the world, SMRR does not send you an email when it’s time to renew, seemingly encouraging newer and younger members to forget to pay and drop. And even if you are an active member, SMRR doesn’t provide you with any information about the convention via email; you have to look deep inside its printed newsletter. And when you finally get to the convention, you realize that being “present” actually means sitting in the John Adams Middle School cafeteria in the middle of perfect Sunday in July for over four excruciating hours, while most of that time is actually spent waiting for one of a few volunteers to hand out and collect ballots while marking your blue index card or stamping your hand.

Based on its antiquated methods of communicating with its members and voting at the convention, SMRR appears to have zero interest in expanding its membership and including younger residents in its democratic process. Denny Zane, one of the SMRR co-chairs, started the convention by asking how many people in the room had been members of SMRR for more than 30 years. But he forgot to ask the more appropriate question considering the decisions facing voters in this election: how many people in the room could be Santa Monica residents and SMRR members for the next 30 years? And he made no effort to recognize newer members who had taken the time to get involved in the organization.

At the start of the meeting, there were three pieces of paper sitting on every chair in the room. Supposedly there is a rule against leaving campaign flyers on the seats, yet all three of these flyers appeared to come from SMRR leadership:

After Armen Melkonians gave his pitch and made the motion to support the Residocracy initiative, SMRR co-chair Zane immediately took the microphone, quickly stated the SMRR steering committee recommendation and then called on another steering committee member to make the substitute motion for that position of “non-support”. Did he really just hijack the process so that members would never even get the chance to vote on the actual binary choice voters will face in November?

The real fun came after the second round of voting for City Council candidates. Davis, Vazquez and Winterer were endorsed in the first round. After the second round, neither O’Day nor Kennedy had enough votes to get to 55 percent and Melkonians missed the cutoff. So based on the rules that were recommended by the steering committee and adopted at the beginning of the meeting, there would be one more round of voting between the two remaining candidates.

O’Day had received more votes than Kennedy in each of the first two rounds, and by a large margin in the second round (about 58 percent to 42 percent if you exclude Melkonians’ votes). Kennedy was the co-chairs’ choice, but if O’Day got 55 percent in the third and final round, which he seemed likely to do, he would lock up the final endorsement.

[pullquote align=right]
Despite the fact that Kennedy received fewer votes than O’Day in every round of voting, the SMRR steering committee is widely expected to throw their support behind Kennedy within a matter of days. If that happens, this will be the second election in a row where the steering committee subverts its own democratic principles and ignores the preference of its members.
[/pullquote]So, it was time for the SMRR leaders to change their own convention rules. According to the SMRR bylaws, “the Steering Committee may, by a two-thirds vote, support, but not endorse, a candidate for a seat for which there is no endorsed candidate.” Nicole Phillis, an active SMRR insider, made a motion to stop balloting, which would give the steering committee the opportunity to support Kennedy following the convention. (Editor’s note: A previous version of this opinion piece said Phillis was a member of the SMRR steering committee. While there is no public record of who sits on the SMRR steering committee, Phillis contacted Next to say she is not on the committee.This article has been updated accordingly.)

Her reasoning was that “significant numbers of the SMRR population” had left between the first and second rounds. There were 198 ballots cast in the first round and 170 in the second round. So 28 people apparently left after the first round, but was she really suggesting that we should ignore the 170 members (86 percent) that stayed to follow SMRR’s rules and complete this three-ballot process?

Judy Abdo, a former steering committee member, then made a substitute motion to have a third ballot. When it came time for someone to speak against the motion for the third ballot, SMRR co-chair Hoffman unabashedly took the allotted time to say that her main reason for opposing the third ballot is “because [Kennedy] has put her heart and soul into this organization, and [Kennedy] is the person who this group should endorse.” Did the co-chair really just say that the democratic process should stop so that the steering committee could support her preferred candidate?

In the third round of voting, O’Day got 80 votes and Kennedy got 78. Neither received the required 55 percent so no endorsement was made. It’s important to pay attention to these numbers. A total of 198 people voted in the first ballot for what is considered the most influential endorsement in Santa Monica elections. That’s 0.2 percent of the Santa Monica population. If you take the 198 people that voted in the first ballot and exclude the sizable contingents from Residocracy (about 50), UNITE HERE (about 35) and Santa Monica Forward (about 20), how many people are left? So why does the SMRR endorsement really mean so much for a city with about 93,000 residents and 65,000 registered voters? Is SMRR really that relevant anymore?

Despite the fact that Kennedy received fewer votes than O’Day in every round of voting, the SMRR steering committee is widely expected to throw their support behind Kennedy within a matter of days. If that happens, this will be the second election in a row where the steering committee subverts its own democratic principles and ignores the preference of its members. At the 2014 convention, no candidates made the cut for endorsement at the convention. The co-chairs’ preferred candidates, Himmelrich and Kennedy, came in fourth and fifth place, respectively, but received the support from the steering committee anyway. Not only was SMRR co-chair Zane being paid by Himmelrich to be her campaign manager, but SMRR also received a $1,000 donation from Himmelrich before the convention and $10,000 donation from her husband, Michael Soloff, shortly after she received the endorsement. Yes, that really happened.

After three rounds of voting and over four hours, O’Day and Kennedy missed the endorsement by 16 and 19 votes, respectively, or 0.02 percent of the Santa Monica population. Only two votes separated these two candidates, both of whom have dedicated so many years of their lives volunteering to serve the people of Santa Monica.

If SMRR wants to be respected as the progressive, democratic organization that it once was, the steering committee should respect the candidates, the process and the results and refrain from supporting a fourth candidate.