Home Mobility Will California Legislature Make it Legal to Roll through Red Lights? 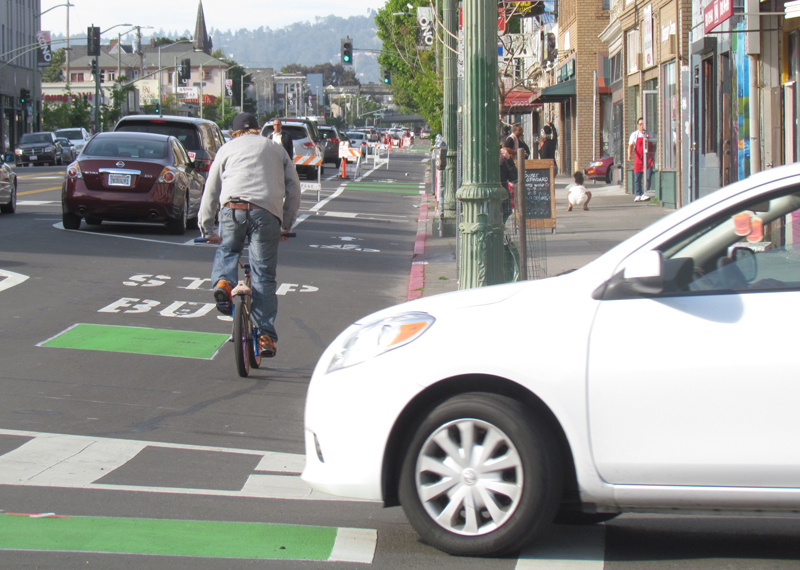 This article was originally published on California Streetsblog on August 2, 2016.

No, this is not about a bill to allow bicyclists to treat stop signs as yield signs, sorry. This is about a bill that supposedly set out to lower fines for cars that turn right on red without stopping. It is sailing unopposed through the state legislature.

The bill, S.B. 986 from Senator Jerry Hill (D-San Mateo), was already looking pretty bad to traffic safety advocates. But Brenda Miller at MyFeetFirst.org noticed something even more insidious in the bill’s wording. Its current draft removes the requirement that drivers “remain stopped” at a red light until it is safe to proceed.

The bill still requires drivers to yield the right-of-way to pedestrians and approaching vehicles, but without the requirement to remain stopped it will be much harder to enforce that provision. It also puts pedestrians at much greater risk, as Miller points out:

SB 986 fails to consider our typical wide, arterial roads where cars in adjacent lanes obstruct a motorist’s view. With two to five lanes in each direction, edging forward is always dicey. Add a slight curve and/or a few parkway plants and/or a truck . . . even the safest drivers have a hard time seeing what’s coming, especially kids. “Remain stopped” in existing law is important.

Streetsblog has already complained several times about this bill, which supposedly was written to assuage complaints that automatic red light cameras were ticketing too many people for violating red light rules. Too many tickets means too many people are violating the law, not that the law needs to change or the fines need to be lowered.

The fine reduction seems like a distraction when you realize that if it is passed the way it’s currently worded, S.B. 986 could change the way drivers navigate intersections.

“It prioritizes the right to make a careless turn,” said Miller, a safety advocate who has worked in the city of San Clemente for many years. “As it stands now, the law says you must stop on a red light, no excuses. That is removed. [The bill authors] added a paragraph that says you must yield the right of way” but it no longer requires you to be cautious on approaching a right turn.

“It also means that the limit line before the crosswalk—which was put there because of the problem of vehicular encroachment—will lose its meaning. Drivers would no longer have to stop [and stay] at a limit line or crosswalk. Those delineations create a bright line perspective as to where the intersection begins and ends, and this effectively removes that delineation.”

“Traffic cops are going to have a difficult time determining where to draw the line,” she said.

On her blog MyFeetFirst, Miller includes a few data points to drive home the safety implications, writing that “more than one third of Orange County’s injury collisions were caused by drivers failing to yield to people in crosswalks.”

Miller also points out what the bill could cost in terms of economic losses from collisions, and what the possible economic consequences might be for cities who want to prioritize pedestrian safety.

S.B. 986 is scheduled for a vote in the Assembly Appropriations Committee tomorrow. There is likely to be little discussion, as it’s the end of the session and the committee has a long list of bills to consider. It could be worth contacting your state Assemblymember to ask them to vote “no” when the bill comes up for a vote on the Assembly floor, some time in the next few weeks.

Otherwise we’ll have to hope that Governor Brown will veto it.

UPDATE: Since this article was originally published on August 2, S.B. 986 has moved into the in the Assembly Appropriations Committee’s “suspense” file and must be voted out of that committee by August 12, which is likely to happen. After that it will go to the floor of the Assembly, and from there to the governor’s desk.