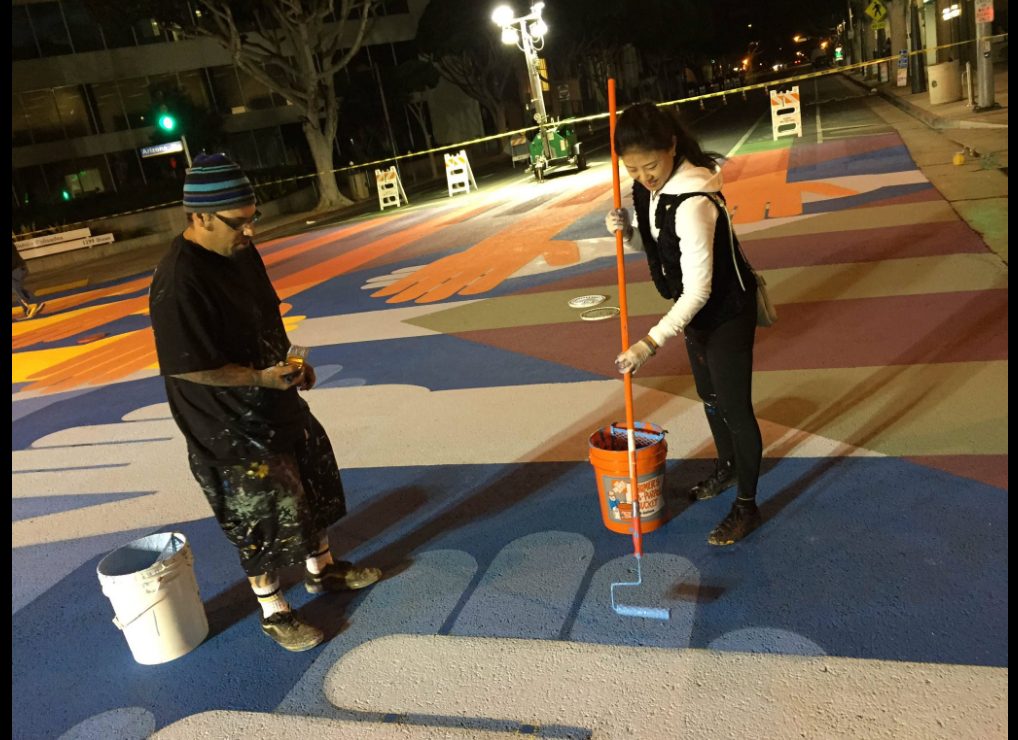 Santa Monica is not the first city to have colored in their crosswalks. Long Beach and West Hollywood are just two local examples of cities that beat them to the street. However, the Santa Monica’s newest “Creative Crosswalks” may be the most intricate.

Both Sunday evening and last night, city staff were hard at work repainting the intersections of Ocean and Broadway (Sunday) and Arizona and Second (last night). The results are a pair of intersections that stand out, even when compared to the rainbow intersections in WeHo and Long Beach. The two brightly colored crossings are two of 12 all-way “scramble” crosswalks in the Downtown designed to reduce congestion and to enhance the safety of pedestrians and cyclists.

Creative crosswalks can create a sense of surprise and delight that adds to the experience of walking in Downtown,” said Francie Stefan (Santa Monica’s mobility manager) to Santa Monica Next when the program was announced last July.

Santa Monica has been making strides toward designing safer, more comfortable streets, including recently adopting a pedestrian action plan that includes a Vision Zero statement, affirming their commitment to reducing the number of traffic-related deaths and serious injuries to zero.

Cities around the world have been using creative crosswalks to not only enliven the pedestrian experience, but to make streets safer by making pedestrian crossings more visible to motorists.

“Come see the crosswalk for yourself! The City of Santa Monica is holding a press conference tomorrow at 9 a.m. with Mayor Tony Vazquez and Assemblymember Richard Bloom from the Downtown Farmers Market to unveil the new crosswalk and to announce an exciting national recognition.”

This story relies on reporting done by Jason Islas before his current leave of absence.