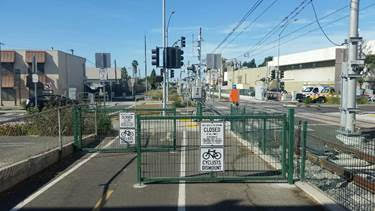 Six sets of staggered gates along the Exposition Corridor Bicycle & Pedestrian Path will be activated today, September 28. The green gates have been installed on the bike path since opening on May 20th. They have been unlocked until today. The locked gates are a safety measure required by the California Public Utilities Commission (CPUC).

When the staggered gates are locked, they slow cyclists down before major intersections to reduce conflicts with pedestrians at sidewalk crossings. Signs have been installed to notify cyclists of an upcoming staggered gate so they have warning and can dismount their bike. There are six sets of staggered gates located on 19th, 20th, and Stewart Streets.

The CPUC is responsible for reviewing and approving all rail crossings and each crossing is evaluated separately.  The CPUC has reviewed the Expo bike path crossings along these streets and determined that the staggered gates are required as part of the controls for these intersections.

While this is a permanent bicycle and pedestrian safety measure, City maintenance crews and Santa Monica Fire Department staff have keys to unlock the gates when necessary.