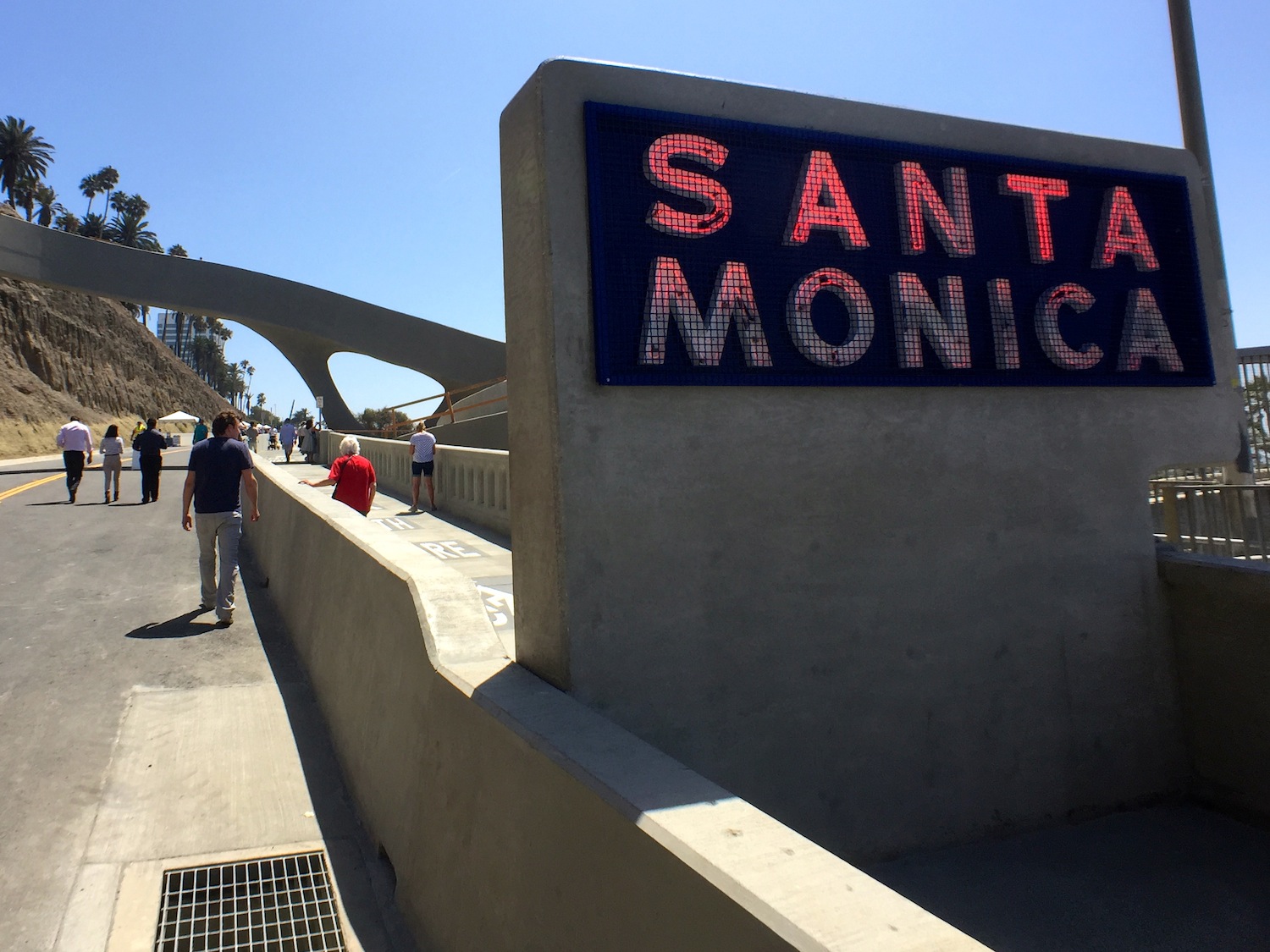 For motorists, the California Incline was always a glorious and scenic way to journey between Pacific Coast Highway and the bluffs of Santa Monica along Ocean Avenue.

Bicyclists and pedestrians who traveled the Incline, however, may not have such fond memories.

The narrow, crumbling sidewalk that ran alongside the road made for a treacherous, crowded passage. Cyclists and pedestrians often had to move off the sidewalk and onto the roadway in order to pass each other.

The rush of speeding cars just a few feet away made it difficult to relax and enjoy the stunning beach views on the horizon.

That all changed on Thursday as city officials unveiled a new and improved California Incline with great fanfare, one they promoted as being more safe and inviting for pedestrians and bicyclists.

The changes were part of a $17 million seismic upgrade for the Incline, which was closed in April of 2015 and eventually demolished to make way for the new span.

The four-foot-wide sidewalk that was once a crumbling lifeline for walkers and cyclists on the old Incline is gone. It’s been replaced by a much wider, smoothly-paved road with clearly marked lanes for bikes and people.

And pedestrians and cyclists are now shielded from passing cars by a concrete barrier.

These changes were welcome news to the scattering of pedestrians and cyclists who sampled the new Incline on Thursday after it opened to the public.  But some wondered whether the new designs went far enough.

Vince Malmgren, an avid cyclist, said he wished the new bike paths “were a little bit wider, but it’s definitely a lot better than what was there before.”

That sentiment was echoed by another rider, Julie Schy. “I don’t think it’s wide enough,” she said. “I personally think it’s too narrow. You have to be single file. I see accidents.”

“I think it’s plenty,” he said. He welcomed the opening of the Incline and said he planned on using it to bike into Santa Monica from the beach bike path. “Now we can get to all the shops and restaurants, no problem. This will be life-changing for us,” he said.

The new Incline has one pedestrian path and two bike lanes. If you stay within the lanes, each bike path is less than four feet across, as is the pedestrian path. At the bottom of the hill all three lanes merge into one that turns into a ramp connecting to a bridge that crosses PCH.

The bridge over PCH is also new, replacing an older, chain-link cage. The new bridge has a more open design so you can enjoy the final leg of the journey toward the beach from the Incline.

That’s a route that Graham Simon often took when he would hop on his beach cruiser and head down the Incline to play beach volleyball before the Incline was closed.  “It was sketchy because we would ride our bikes down the sidewalk and cars would be zooming up from the PCH and going pretty fast,” he said. Now, he says, “the barrier alone makes such a huge improvement.”

Even with the added safety features, cyclists and walkers will still have to contend with the fact that the Incline is, well, an incline. It features an eight percent grade.

“It’s a little bit steep, admittedly,” said Kyle Kozar, Bike Share Coordinator with the city of Santa Monica. “But I don’t think it’s going to be a big deal, even riding up it.”

Santa Monica city engineer Lee Swain had some advice for cyclist heading down the Incline: “Enjoy the views, but of course be safe. Make sure to test your brakes,” he said.

Swain said that the Incline was originally built as a dirt trail in the late 1800’s. It opened to vehicular traffic in 1905.

The last time it had serious construction work was almost 80 years ago, well before modern seismic codes were put into place.

The old bridge was actually a series or five partial bridges, according to Swain. The new bridge is one continuous, 750-foot-long span. It’s also 52 feet wide, which is more than five feet wider than the old bridge.

While the focus Thursday was on what’s new with the Incline, officials also pointed out what didn’t change.

As a nod to the past, the iconic, porcelain-coated Santa Monica sign that stood at the Incline’s base is back, spiffed up and featuring more energy efficient lights. The Incline’s new outside rail also recreates the archway motif featured in the old bridge.

The bluffs along the Incline look the same to the casual eye, which was the intent. But change happened here, too. More than a thousand special nails were drilled into the soil without defacing them, Swain said. This preserves the weather-worn appearance of the bluffs while at the same time making the area stronger in the event of an earthquake.

“A lot of people really loved the natural beauty of the erosion that has occurred over many, many years,” he said.

Santa Monica Mayor Tony Vazquez said that more than 90 percent of the project’s cost was paid by federal funds.

A separate $2 million construction effort to renovate the nearby Idaho Trail Overcrossing is almost finished as well, and should be ready by the end of September, he added.