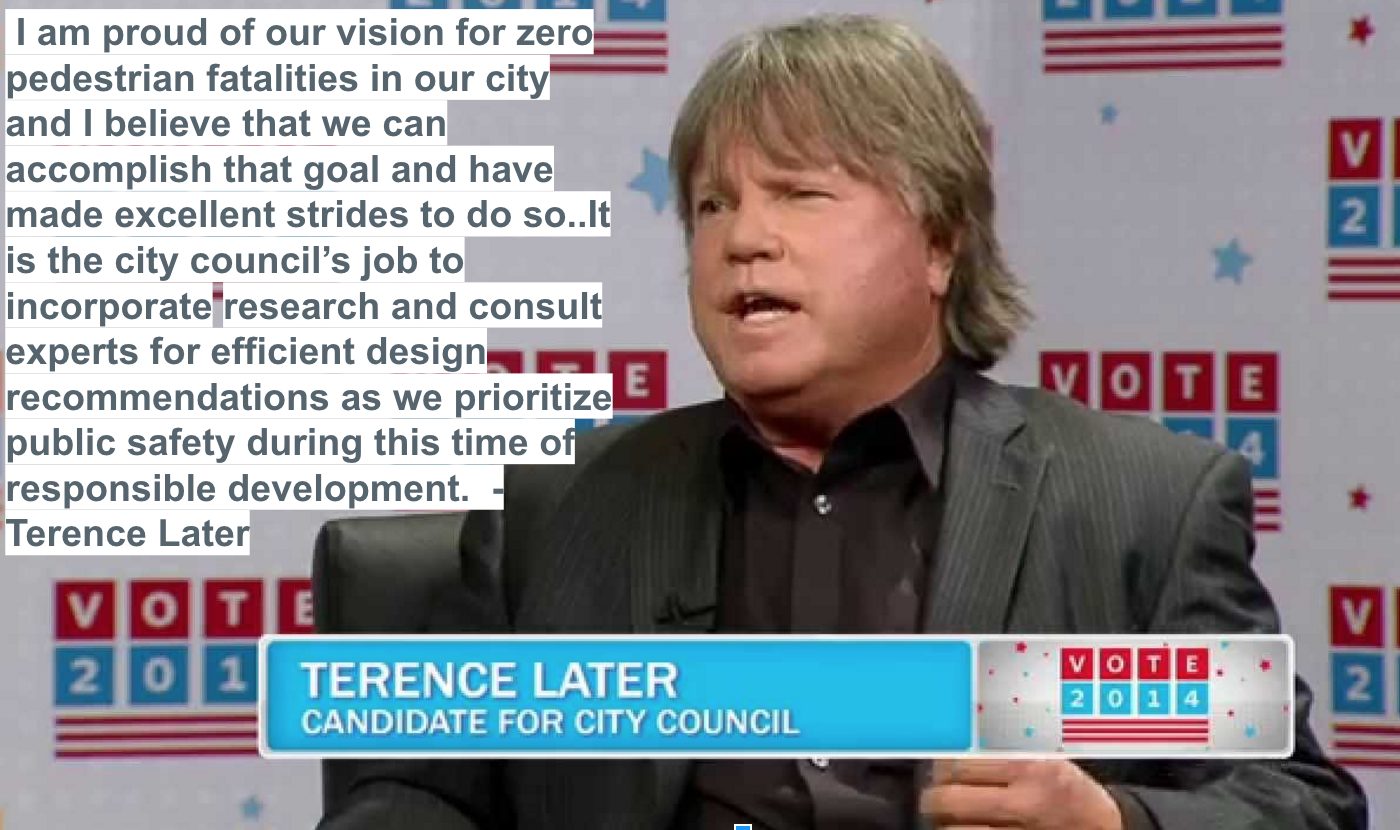 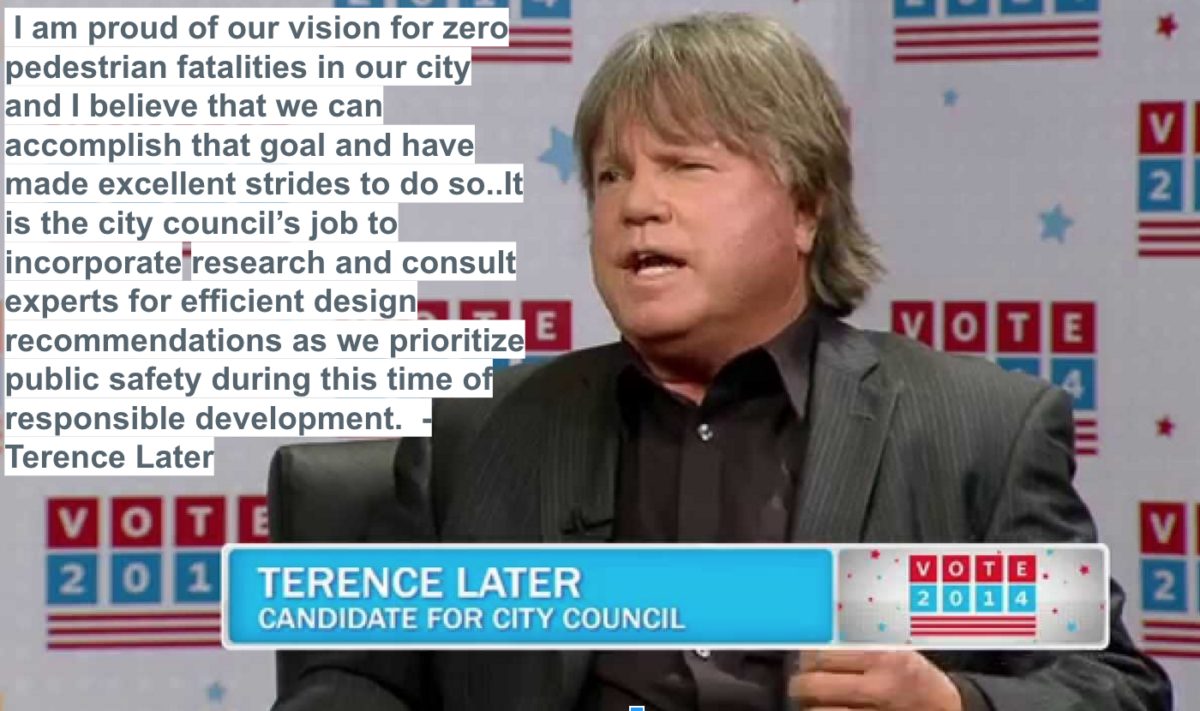 We hope to hear from Mayor Tony Vazquez, Armen Melkonians, Oscar de la Torre and James Watson so we can share their answers for the remaining eight questions.

Today’s Question : Santa Monica’s Pedestrian Action Plan calls for “Vision Zero.” What does Vision Zero mean to you? How do you think the city is doing in meeting that expectation/policy goal? What does the city need to do more of in order to accomplish Vision Zero? As a Council member, how would you make that happen?

Vision Zero means that auto traffic-caused fatalities and injuries, particularly to pedestrians and cyclist, are unacceptable and therefore mobility planning should emphasize safety. Here in Santa Monica we’ve made progress with implementation of various phases of our Bicycle and Pedestrian Action Plans and with road diets and other infrastructure improvements to our public right-of-ways, but we have much more to do. For instance, while the new pedestrian scrambles downtown are an improvement to pedestrian safety, we should be prohibiting right turns by vehicles when pedestrians are using the crosswalks. And elsewhere in the city pedestrians shouldn’t have to push a button to get a green light to enter a heavily utilized crosswalk – the pedestrian crossing should be automatic when a traffic signal changes. Then we need to implement the LiNC plan to make Lincoln Boulevard a more desirable venue for walking; add dedicated bike lanes; and increase our focus on education and enforcement.

Vision Zero means striving to reduce traffic fatalities and injuries to zero.  I think both the Bicycle Action Plan and the Pedestrian Action Plan establish excellent frameworks for meeting that goal.  To get closer to Vision Zero, the City should make infrastructure improvements that make it safer for everyone.  For example, we need to give seniors sufficient time to safely get across streets even if that means making drivers wait a few seconds longer.  We need more separated bike lanes so that conflicts between drivers and cyclists are reduced.  We need better transit so that it is easier for people to use Big Blue Bus and other transit systems to get around.  Finally, we need to continue to think about how we want our streets to operate.  In Barcelona, they are developing “superblocks” or mini-neighborhoods that are 3 block by 3 block areas that encourage vehicle traffic on the edge of the superblock but allow only slower pedestrian and cyclist friendly traffic patterns on the streets inside of the block.  The interior streets become “citizen spaces” that are safer and greener.  I would like to try something like this in Santa Monica.

Vision Zero sounds great as a PR ploy, but it accomplishes very little to reduce traffic, which continues to worsen, despite all the promises and plans of our all SMRR city council. There is a war between pedestrians, cyc;ists and motorists and the motorists are winning.

I am proud of our vision for zero pedestrian fatalities in our city and I believe that we can accomplish that goal and have made excellent strides to do so. Of course, it is important for pedestrians to be mindful and aware of their surroundings on our sidewalks and pedestrian pathways, but it is the city council’s job to incorporate  research and consult experts for efficient design recommendations as we prioritize public safety during this time of responsible development. We want people to be able to safely enjoy a walk in our scenic wonderland. Also, I will work for a stretch of our beach to be preserved for a dog-friendly area (lovingly referred to as Dogtown Dog Beach), which will be another great reason to walk instead of drive in Santa Monica.

We have insufficient bike lanes citywide in Santa Monica and, for those of us already living car-free the newly placed lanes are a joke. It is a costly move for the city to revisit the existing lanes for sure, but we can revisit the functionality as our streets improve to meet expectations. Perhaps requiring our city government officials to ride a bicycle to work on the existing lanes one day per week would solve the car-centric plans proposed for 2017? We can begin by enforcing a  25-mph speed limit—one of NYC Mayor Bill De Blasio’s crowning achievements as a segway to accomplish Vision Zero. Lower vehicle speeds mean that a crash is more likely to result in injury than death. ALSO: As a critical part of the Vision Zero initiative, we can opt in educational programs at schools, senior centers, and in high-density neighborhoods, and change the language around traffic fatalities—referring to them as crashes, not accidents—can have a profound impact on the way people view transportation and safety.

We need to bring Vision Zero back before the Council to get an update on our implementation along with our Bike Action Plan. We made fantastic progress since the adoption of the BAP five years ago, but I believe the process has stalled. Many of our bike lanes are not linked, the paint is fading, there are more bikes on the road and we need to reimagine the next stage of our investment. When I joined the council, I personally fought to allocate $7 million in funding to our bike lanes, and with the opening of Expo Bike Path, the changes have been transformative. It is now time to double down on that legacy and I will bring this forward soon to the Council.