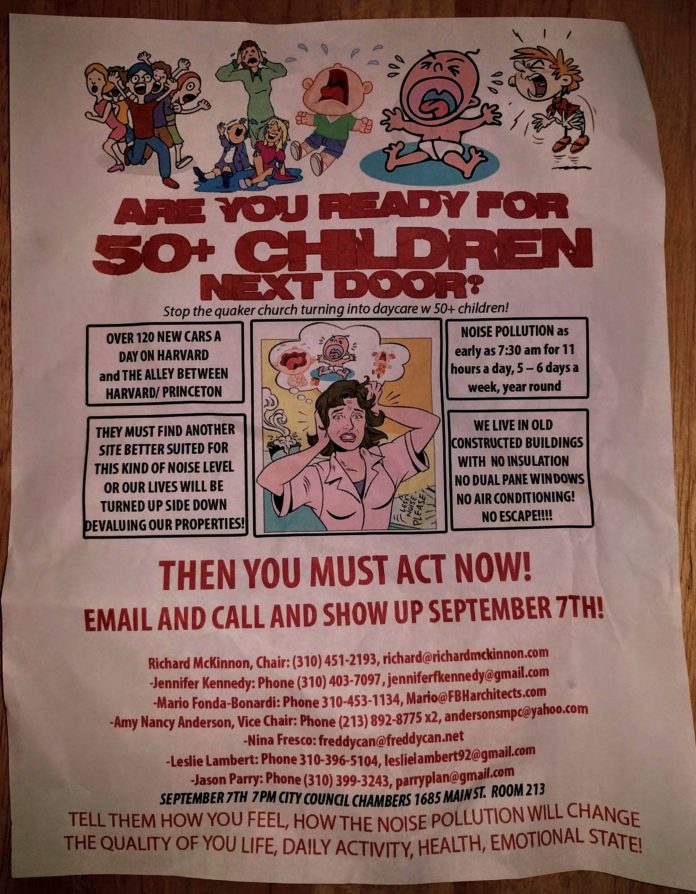 (UPDATE, September 8, 8:30 A.M. – Last night the City Planning Commission approved the permit for the location with some small changes including increasing the number of children allowed onsite. The proposal must now go before the Architectural Review Board for design review, but the Planning Commission’s approval can still be appealed to the City Council.)

Tomorrow, the Santa Monica Planning Commission will vote on whether to approve a Conditional Use Permit (CUP) allowing the owners of an existing daycare center can expand from 14 kids to a 30-child daycare center in a new location, at the Quaker church on Harvard Street (link to staff report.)

Some neighbors of the Quaker church are opposed to relocation of My First Place, presently on 22nd Street in the Pico neighborhood. They plastered fliers on doors and windshields throughout the area on Thursday and Friday of last week that claimed there will be 50 kids “screaming” outside as early as 7 a.m. and that the center will somehow generate 120 daily car trips.

Sadly, it has become commonplace in Santa Monica to use a hyperbolic version of any planning proposal as a fear-driven shortcut to organizing opposition.

The flyer itself contains claims which are factually incorrect. The proposed terms of the conditional use permit submitted by The Activity Place LLC (aka My First Place) limits the facility to 20 kids in its first year, and 30 if all goes well in total. The operator has proposed to open at 8 a.m., not 7 a.m. as stated in the flier.  And absent in the rhetoric is the condition that the facility will give preferential enrollment to families that live within ½ mile of the center, thus reducing car trips to the site well below the average of 2.4 trips per student the flier assumes.

Why This Is So Important?

The ability for My First Place to move to this location is a high priority for the City. The owners of My First Place (The Activity Place LLC) previously sought to expand its capacity from 14 to 30 at their current location. This application was approved by the Planning Commission in June 2015– but the terms of that conditional user permit included onerous stipulations, such as a requirement that only 6 of the 30 kids could be allowed outside to play at a time. Per the staff report for the relocation of this center, these simply weren’t realistic to implement (see pages 2 & 3). With help from the City’s Community and Cultural Services department, My First Place sought out a new location altogether. It thought it found a potential new location here:

But residents along the street have not been as welcoming (pdf).

The fact is, the relocation of My First Place to this location with expanded capacity is critical in enabling the City to incrementally chip away at the chronic shortage of full-time child care spaces for children under two.

Contrary to the claims made by some neighbors of the Quaker House, a 2014 RAND study of the City’s early and school-age care offerings found the City was home to approximately 1,750 children under two–but there were only 208 infant and toddler spaces in licensed centers (places such as the YMCA, Hill & Dale, and The Growing Place)–to serve them.

A 2015 update by the City reports there are only 343 spaces for children under two; this is the sum of spaces in both centers and licensed home-based daycares. 83% of the need is unmet.

The shortage of spaces for Santa Monicans under two causes working families undue stress and can have dire financial consequences.

“Working families in particular are affected because, all too frequently, a parent delays or foregoes a return to the workforce due to unavailability of quality infant and toddler care,” Councilmember Gleam Davis told Next in 2015. “The loss of the income of the parent then puts economic pressure on the family leading to a whole different set of challenges.”

“Working families in particular are affected (due to a shortage of childcare spaces) because, all too frequently, a parent delays or foregoes a return to the workforce due to unavailability of quality infant and toddler care.” – Councilmember Gleam Davis in 2015.

By all accounts, this is a reputable childcare operator seeking to close the gap. Furthermore, they already work with Connections for Children, a group that provides financial aid for families who can’t afford market-rate childcare. The opening of this Center increases the availability of some spots that can go to families with a voucher.

Ultimately, the updated zoning code allows for child care facilities in residential neighborhoods under a conditional use permit. The regulatory hurdle that comes with a CUP introduces a level of risk that dissuades prospective child care operators. As of the Friday before the meeting, the Planning Commission had received 15 letters from neighbors, all opposed to the hyperbolic version of the project that wasn’t under consideration.

More on the objections of nearby residents

Of course, this being Santa Monica, there were the objections based on traffic concerns and more. I found these in the staff report.

They also lament that they have to call the city to enforce the preferential parking district.

And the “I’m a child and family advocate, but… “ opposition to the hyperbolic project.

The acknowledgement that children need a safe space, and the proposal to put them in the 20-year old abandoned construction site down the street:

And then someone, apparently unaware of the possibility of curtains, who will go insane if they have to listen to more people grunt as they go to the restroom.

Keep in mind, these churchgoers are Quakers, pacifists known for silent meeting services.

Now you may think the sky is falling, that the sudden onslaught of children will ruin the neighborhood.  But children on Harvard street are nothing new.

For one, the facility that My First Place seeks to move into at the Quaker church was home to the Early Childhood Parenting Center, which supported families in Santa Monica through by hosting parenting groups and offering mental health counseling services. They also provided services to families in underserved communities in LA County. ECPC eventually merged with Providence Saint Johns, where it continues to serve families living in homeless shelters and nonprofit-managed affordable housing communities.

It seemed that some of the complainants at 1450 Harvard Street mixed up their experiences living next to ECPC with the Petit a Petit daycare, a French dual-immersion home-based daycare that had been licensed for up to 8 kids on 1452 Harvard Street. Due to the demands for child care on the Westside, Petit a Petit sought to expand and wound up moving to a bigger space in West Los Angeles.