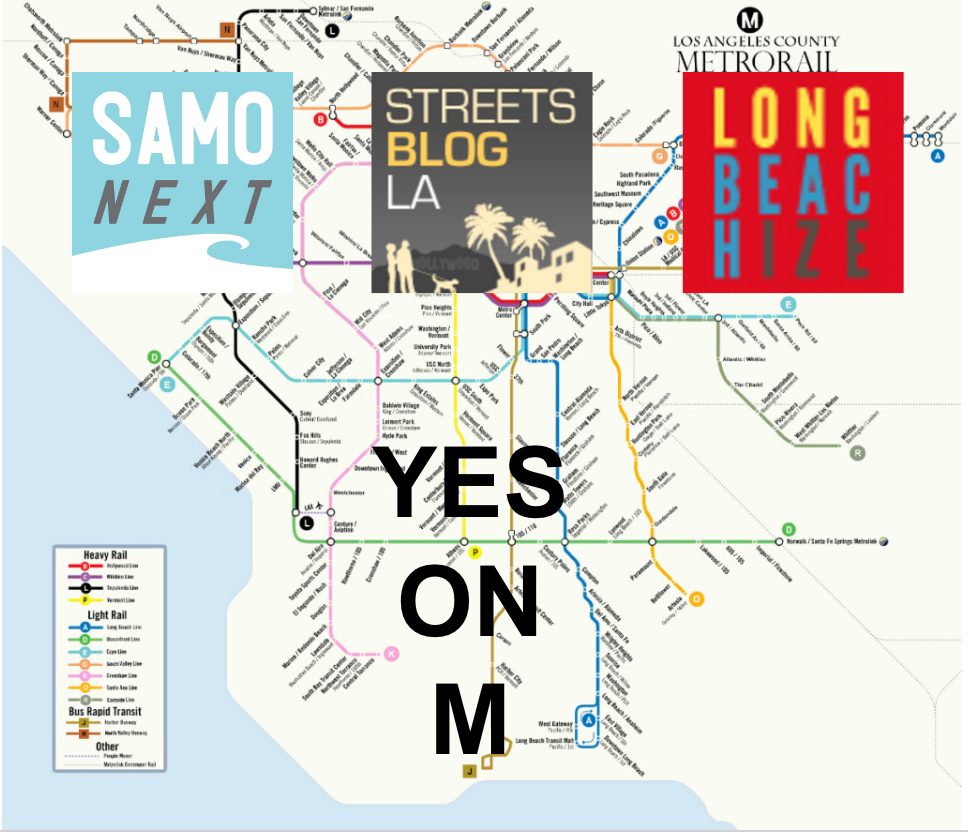 There is a lot to like about Measure M, the Los Angeles County sales tax that would fund a mix of transit and other transportation projects throughout the county. For all of the transit, mobility, walkability, bikeability benefits – not to mention health, environmental, and job benefits – across the region, Santa Monica Next endorses Measure M.

Start by taking a look at the fully-built-out transit map that volunteer Adam Linder created based on Measure M’s expenditure plan. This is huge. This rail and rapid bus network would change the way that L.A. County moves. Frequent, high quality transit would extend to the San Fernando Valley, Pomona, the South Bay, the Sepulveda Pass, West Hollywood, Glendale, and to the edges of San Bernardino and Orange Counties.

There is plenty more for livability in Measure M’s expenditure plan: bicycling and walking especially for the first/last mile connection to transit, Metrolink, complete streets, fare subsidies for those in need, ADA paratransit, and hard-to-come-by maintenance funding to keep Metro’s facilities in a state of good repair.

Measure M is not perfect.

State law makes it nearly impossible to pass a ballot measure with any sort of tax except a sales tax. This means that despite the best intentions of the authors of the initiative, the funding mechanism for this revolutionary proposal is still a regressive sales tax. Distressingly, it offers the least promise to the lower-income residents of L.A. who will be disproportionately impacted by the sales tax and who rely on bus service the most.

Measure M would also fund outdated freeway and road projects. We can look past this spending as a pragmatic move to appease the voting public to get the measure passed. Among the early opposition to Measure M, though, are groups that find the measure’s highway funding to be insufficient. These backward-looking interests want to see more freeway widening sooner, no doubt continuing Southern California’s sad expensive spiral of more widening and more congestion.

Outdated highway projects are unsustainable in many ways, including fiscally. With state and federal gas tax revenues failing to cover ongoing transportation expenditures, it is a critical time for Los Angeles County to continue to step up and fund our own transportation future. Measure M would create an indefinite funding stream that gives L.A. County control of our future spending. Local control helps ensure that spending prioritizes local needs, even as those needs change and grow.

In 2008 and 2012, neither Streetsblog L.A., LongBeachize nor Santa Monica Next endorsed or oppose Measure R or Measure J. Measure M is significantly better and more holistic than either of those prior propositions.

Lastly, the leadership of Metro CEO Phil Washington at the helm gives us greater confidence in supporting Measure M. Washington, his team, and plenty of continuing dedicated Metro staff, are taking strides to ensure that Metro is well-managed, fiscally prudent, and responsive to its riders and their communities. With the significant changes that transit and transit-oriented development are already bringing to many areas, Washington’s Metro will need to prioritize building stronger relationships with affected communities as it continues to build its networks. Metro needs be proactive in ensuring that all communities benefit from this growth, especially lower-income communities of color that continue to be the core of Metro’s ridership.

Santa Monica Next strongly endorses Measure M, and urges all our readers to vote yes on M on November 8.