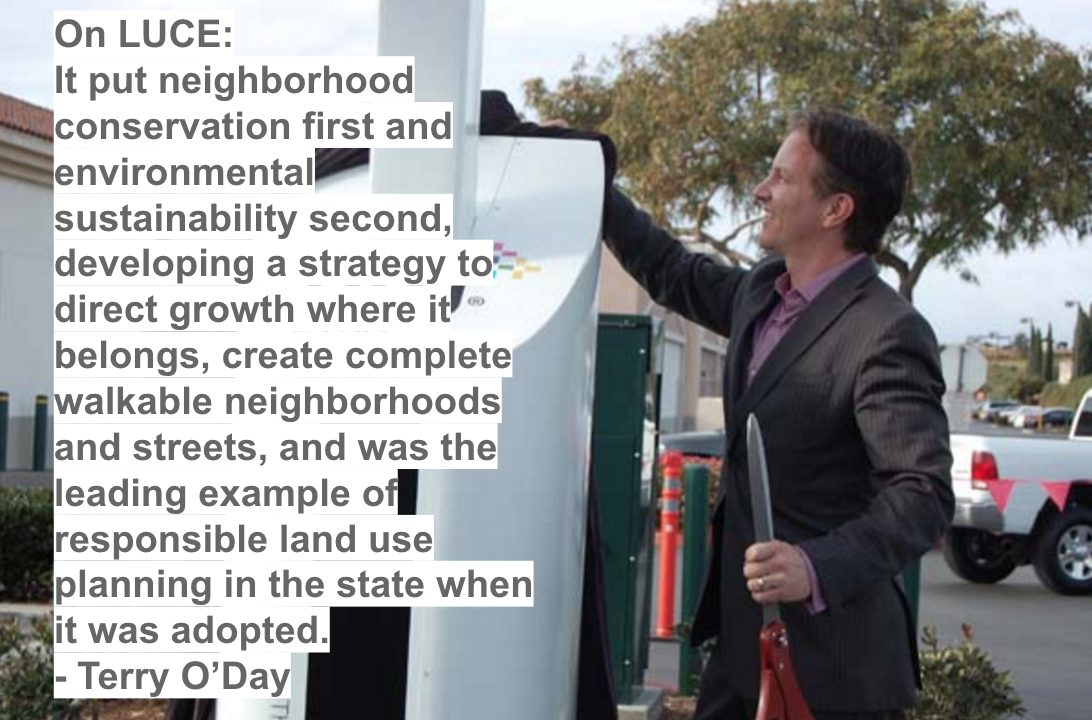 These are documents posted online that encompass thousands of pages of proposed, and approved plans for Santa Monica, by the incumbent city council. They include everything from revitalization, closing off streets, rezoning and roundabouts on streets like Michigan Ave. I think we need to consider where we are maintaining a vibrant and healthy community, and where we are blatantly paving the way for more gentrified areas. Let’s ask a question, are we really creating green open, usable spaces with this initiative or gentrifying in the name of it?

Our LUCE contains two of the elements that the state requires in a General Plan, which guides the future of a city. In 2004 the City initiated a community-wide planning process to look at future development and mobility strategies and in 2010 the LUCE was adopted to provide the framework for growth and mobility for the next two decades. The crux of the LUCE is its vision of retaining the character and scale of over 90% of our town, particularly the residential neighborhoods, while allowing growth, especially new housing, on our commercial boulevards, near the Expo stations and downtown.

The LUCE is the City’s general plan to control growth over the next 20-25 years.  It is designed to preserve existing residential neighborhoods by encouraging the development of new housing in downtown, along commercial boulevards, and in the previously-industrial areas on the east side of town.  It also envisions complete streets and neighborhoods where transit and walking, biking, and other modes of active transportation become viable alternatives to the automobile.  If the LUCE is fully enacted, Wilshire and other commercial boulevards and the east side of town should become lively pedestrian environments with resident-serving amenities instead of uninviting automobile thoroughfares.

LUCE is a well-meaning effort that is missing a key element, voter involvement in the development of our community. LUCE is part of our city’s General Plan and is a vision for the next 20 years, after being adopted in 2010. It establishes our land use, urban design, and transportation vision and provides a framework for implementing this vision. As a council member, I will work within LUCE guidelines while also supporting efforts such as Measure LV, which will re-balance the power back to the citizens and ensure we hear their voice regarding development.

The 2010 LUCE was a 10-year project that incorporated the broadest community input of any plan in the city’s history, received numerous awards, and resulted in more than 35% reduction in projected global warming pollution. It put neighborhood conservation first and environmental sustainability second, developing a strategy to direct growth where it belongs, create complete walkable neighborhoods and streets, and was the leading example of responsible land use planning in the state when it was adopted.

LUCE is the result of Developers pouring money into duping voters to pass it and they have  succeeded in taking over OUR city for personal profite and to feed the gred of public servants. It goes too far and ignores what is best for the residents’ quality of life, and now theses parasites want to raise the height limits, WITH the support of the entire city council. It’s time to RECALL the entire council and take our city back from these predatory opportunists!

Original image from the Carlsbad Chamber of Commerce.