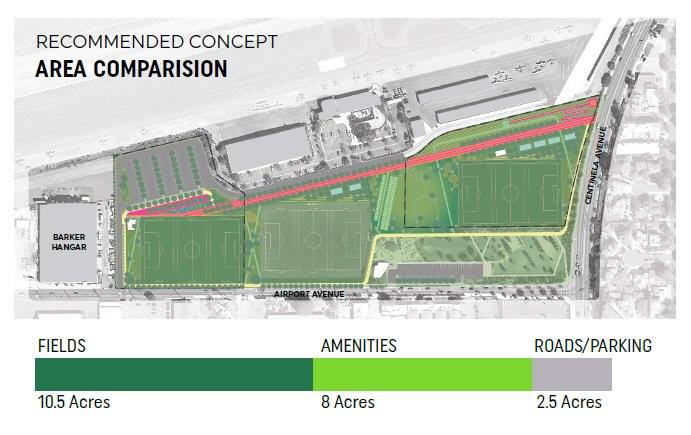 While the battle over how much control the City of Santa Monica has over the leases and operations of its airport continues in court and the newspapers; the city announced it has selected a plan to convert 12 acres of reclaimed airport land into a park. The plan, submitted by Rios Clementi Hale Studios is not part of the ongoing legal dispute between the city and aviation agencies and could be completed by as early as 2018.

“The design reflects the community’s vision, doubles the size of the park, and will grow to become a beloved center of recreation,” said Mayor Tony Vazquez. “We are thrilled with the multi-use concept and that so many people were an active part of the process.”

The new plan would over double the size of the existing Airport Park from 9 to 21 total acres and would be on former airplane parking on the east end of the airport footprint. The land was turned back over to the city after an agreement with the federal government expired on July 1 of last year.

The existing playground and dog park will not change.

The announcement comes as a win for backers of the 2014 Measure LC, which was passed by an overwhelming majority of city voters. The initiative promised that as the city gained more control of the land currently used by the airport, the land could not be used for anything besides increasing the city’s open space without another vote of city residents. Opponents to the measure and supporters of the airport insisted that airport land, when given to a non-aviation use, would be turned over to private developers.

Thus far, that has not been the case.

The Airport Park Expansion Project now moves into Phase ll, design and environmental review. Pending the identification of funding for construction, the project is expected to break ground in spring 2018.