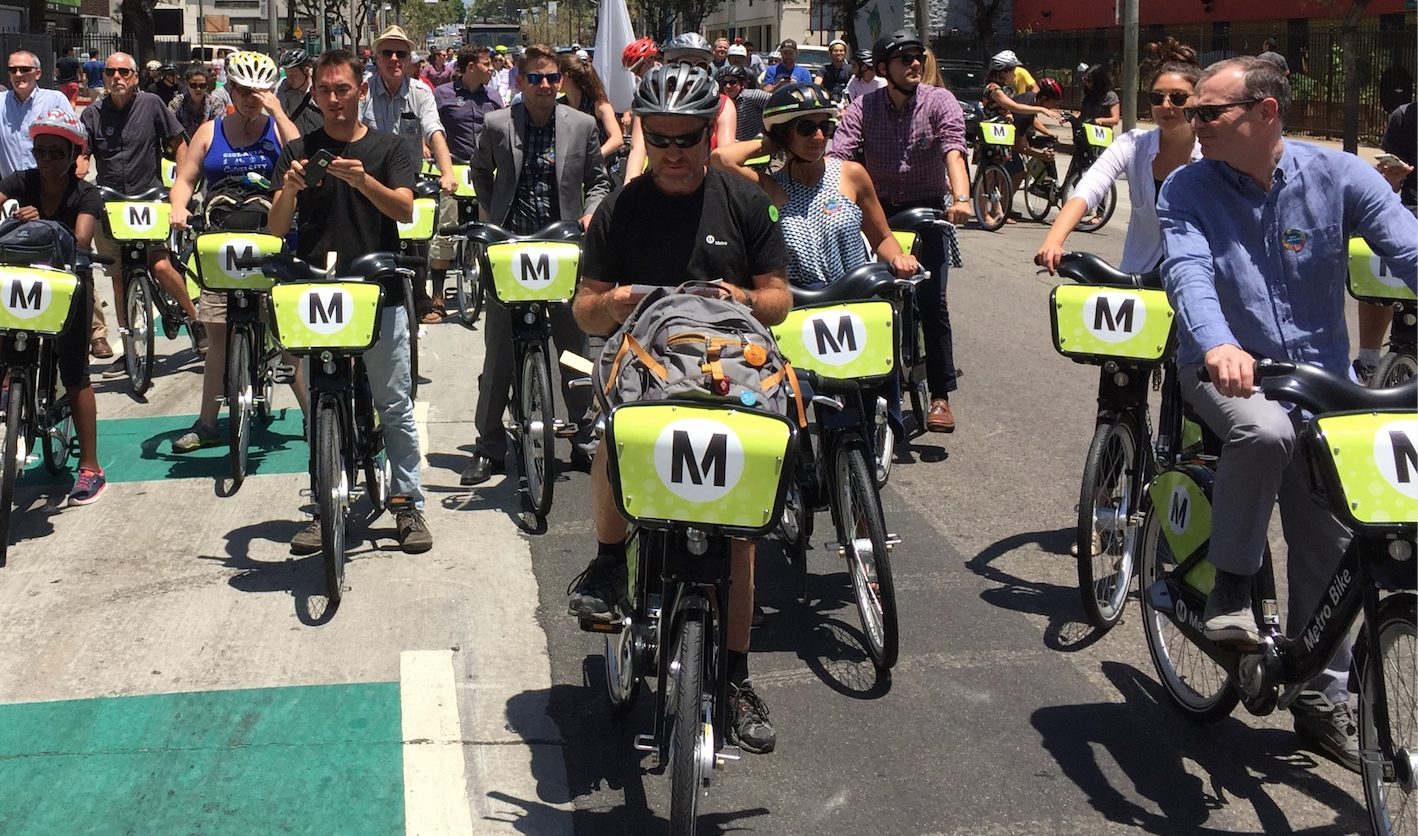 If the bike-share expansion plan is approved by the Board next week, Metro will allocate $42 million to continue and to expand bicycling in L.A. County. Any expansion of bike-share is welcome. Unfortunately, some of the new locations raise questions as to whether expansion plans are more political than strategic, and more focused on tourists than on local riders.

Bike-share mobility is optimized when docks are located in a contiguous area where one can ride a bike to numerous other docks. Compared to disconnected islands, larger service area “blobs” present exponentially more destinations. Larger areas are also less costly to operate and maintain. In the words of NYCDOT bike-share architect Jon Orcutt:

Plans to launch bike-share systems in separate geographical areas or nodes are almost certainly a recipe for low usage.

Watch Orcutt’s explainer video for a good visualization of these points.

A NACTO report found lower-performing bike-share systems in cities with more spread-out systems. Many cities bow to political pressure to spread stations over a wide geographic area in order to accommodate various constituencies. Metro is poised to make this common mistake.

Expansion is not entirely up to Metro. Metro’s policy mandates cost share arrangements with local jurisdictions, so, to a large extent, expansion follows funding. This is especially true for planned expansion to the Port of Los Angeles locations in San Pedro and Wilmington.

According to testimony from Metro Deputy Executive Officer for Active Transportation Laura Cornejo, the Port system would primarily cater to tourists. Metro staff reported that other bike-share systems driven by tourist use are “quite profitable.” Cornejo stated that the Port was interested in implementing bike-share and was considering a “neighboring provider.” The provider went unnamed, but clearly it has to be CycleHop, which runs Long Beach Bike Share. The Port comes to the table with money. Up front, the Port and Metro would each pay $334,000 in initial capital costs for 120 bikes at 11 stations, tentatively seven in San Pedro and four in Wilmington. Subsequent ongoing operation costs are split with the Port paying 65 percent. Metro approved a conservative scenario for its share of the Port system capital costs plus six years operations for a grand total of $4.9 million.

These Port systems – with four and seven stations, and very little in the way of transit connections – could see very little usage. Bike-share systems in the Orange County cities of Fullerton and Anaheim failed with eleven and three stations, respectively. Cornejo characterized the Port of L.A. system as an “interesting pilot.” Time will tell if it turns out to be nearly $5 million in limited Metro bike-share funding well spent.

The Pasadena and Venice systems are more fully-featured and more likely to be successful.

The city of Pasadena was always second in line in Metro’s regional bike-share plan. The Pasadena system will be roughly half the size of the current downtown Los Angeles one; there will be 34 docking stations and 375 bicycles. Pasadena’s system will have excellent connectivity with five Metro Gold Line rail stations: Fillmore, Del Mar, Memorial Park, Lake, and Allen.

Pasadena received Metro Call for Projects funding for the city’s share of the initial costs. Metro and Pasadena split the initial $2 million capital cost. Then Metro’s commitment, again in a conservative minimal-revenue scenario would be $11 million for six years.

According to Cornejo, Venice was selected to proceed quickly due to the interest and support from Los Angeles City Councilmember and Metro Boardmember Mike Bonin.

More reasons for Venice’s selection may be that same “neighboring provider” CycleHop and those tourists’ dollars. Around the world, bike-share systems count on walk-up tourist revenue to help their bottom line. System statistics show more rides from local pass-holders with more revenue per rider from walk-up rides. In the words of a Metro staff report explaining Metro Bike Share’s fee structure: visitors and tourists “are not price-sensitive.”

CycleHop is merging and integrating its bike-share systems in Santa Monica, Long Beach, Beverly Hills, West Hollywood and, soon, UCLA. This westside regional system could easily spread along the “quite profitable” coastal tourist market extending from Santa Monica into South Bay beach cities. Except that the city of L.A.’s Venice neighborhood stands between Santa Monica and the South Bay. The decision, by the city of L.A. and Metro, to select Venice for early expansion could be motivated by wanting to get in on the tourist market ahead of the competition.

Venice already has several Santa Monica Breeze bike-share stations operated by CycleHop. Under the agreement that allows Santa Monica to place five Breeze stations in Venice, Venice (part of the city of L.A.) can reciprocate with five stations in Santa Monica. These new Santa Monica Metro Bike Share stations could go far to enhance the Venice bike-share network by connecting it with the Metro Expo Line. On the other hand, those five new Santa Monica stations contribute little to mobility, as Santa Monica is already well served by bike-share. Having these two systems go head-to-head this early on seems potentially poised to start a sort of territorial cold war. Instead of a détente where CycleHop runs a network of Westside smart-bike systems and Metro’s contractor Bicycle Transit Systems runs a network of central L.A. County smart-dock systems, it looks like the Venice/Santa Monica market will get a glut of investment, potentially resulting in some simmering conflict and rider confusion.

In a best-case scenario, there will be peaceful coexistence, perhaps even synergy. The proximity of the two systems could foster a respectful healthy competition with both vendors striving to better serve bike-share customers. This could precipitate full-fledged system inter-operability, with features like joint-membership so any rider could easily ride either Metro or Breeze bikes.

In a worst-case scenario, there could be bitter conflicts. It took quite a bit of permitting bureaucracy to allow the first Breeze stations in Venice, so perhaps L.A. could take issue with Santa Monica over Metro Bike Share station permitting or placement there. Conflicts could lead to the revoking of agreements, the removal of stations, stricter system boundaries, retaliation, bullying, and diminished overall utility for mobility.

This apparent competition for the profitable coastal markets has implications for mobility and equity. Funding available for bike-share is limited. If both CycleHop and Metro/Bicycle Transit Systems end up focusing much of their resources in the same Venice/Santa Monica area already served by bike-share, then resources are not available for other parts of the county that lack bike-share. Like too much of the “sharing economy,” if both systems chase tourist markets, then expansion into low-income neighborhoods will never happen. County Supervisor Hilda Solis asked Metro staff about this dynamic this week questioning when Metro Bike Share will reach areas that “aren’t along the beach.” Solis represents unincorporated East Los Angeles, which was recently awarded Call for Projects funding to implement Metro Bike Share, which will include connections with Metro Gold Line stations.

Metro’s early approach to bike-share was praised by the L.A. Times, and The Tranport Politic for being “a new type of bike sharing… tightly integrated into the transit system.” The Pasadena expansion builds on the strength of bike-share serving transit’s first/last mile. The Port of L.A. system hardly does at all. The Venice system only does in a place where that service already exists.

What would Metro Bike Share expansion look like if the agency most highly prioritized transit connections, mobility and equity?

The alternative is, in the words of Orcutt, “low-usage bike share [which] can discredit bike share or bicycle transportation generally, and make further expansion a dubious prospect.”

Overall it is good news that Metro Bike Share is investing in expansion only three months after its downtown L.A. premiere. Nationwide, bike-share is still in its infancy. Senior U.S. bike-share systems are around a decade old. L.A. County’s first bike share, Breeze, turns one year old next month. All in all, bike-share remains fairly fluid. In this dynamic environment, it does not make sense for Metro to place all its eggs in one basket, whether that basket is downtown L.A., tourists, or even disadvantaged communities. It is not clear exactly how L.A. County bike-share systems will function best. Nonetheless, it is important to make sure that expansion is as balanced, efficient, fair, and equitable as possible.