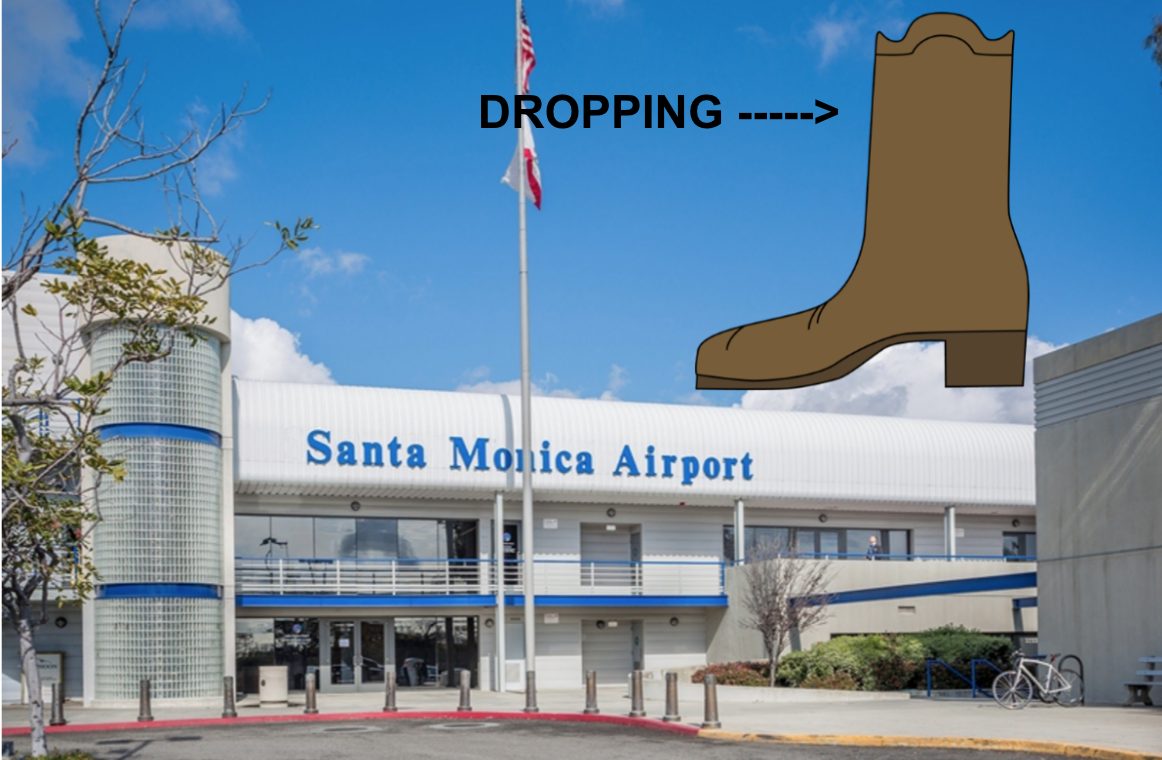 This article appeared last week at The Healthy City Local.

Last week I asked whether the other shoe, namely an FAA boot, was about to drop with respect to the Santa Monica Airport (SMO), i.e., would the Federal Aviation Administration take action to stop the City of Santa Monica from further reducing aviation operations at SMO?

The answer came Monday, when the FAA served the City with a “Notice of Investigation,” accompanied by subpoenas. The FAA gave the City ten days to respond to questions as to whether City actions and policies, including a purported refusal to enter into leases with aviation businesses, eviction notices given to two “fixed base operators” (FBOs), and its own plans to take over FBO-type operations at SMO, violate federal requirements to operate the airport “on reasonable terms.” These requirements apply primarily because of the FAA’s own ruling that Santa Monica must keep the airport open until 2023 because of federal grants the City received in 2003 and “assurances” that go along with the grants. The City says the grant assurances expired in 2014 and has appealed the FAA’s ruling to the Ninth Circuit Court of Appeals.

What apparently motivated the agency to step in now, after the City has been chipping away at airport operations for more than a year, were eviction notices the City sent to Atlantic Aviation and American Flyers, the two FBOs that provide fuel at SMO, and the City’s plans to replace them with the City’s own operations, something the City, as owner of the airport, has the right to do. The City demanded that the two FBOs vacate by October 15. In its notice, the FAA “strongly recommends” that the City drop the eviction notices until everything is resolved with the FAA.

Based on language in the FAA’s notice of investigation, the investigation’s purpose is to provide the basis for the FAA to issue an order to the City to keep the airport running as it has been running, at least until the City’s litigation with the FAA has been resolved.

The FAA has also demanded that the City give the agency details about how the City plans to provide aviation services once the FBOs are gone. It’s the FAA’s position that the City must continue the same services as are provided there now, and that it must provide these services using its own employees. The City disputes that it has to provide the FAA with its plans, and it also disputes that it must provide the all the services that the FBOs currently provide. While it’s possible that these issues will be resolved informally with the FAA (the City told the FAA that it would “consult cooperatively” with the FAA), if the FAA issues an order based on its investigation, these issues will likely be litigated.

It’s presumptuous to suggest legal tactics without having access to all the information, but I can’t help but be reminded of the old tai chi adage that if you’re standing on railroad tracks and a train is bearing down, the way to stop the train from running you over is not to put your hands up and try to block it, but rather to step off the tracks. Meaning that it’s not in the City’s interests to find itself operating under the strictures of an FAA administrative order or, worse, an injunction. You never know how broadly an order or an injunction will extend.

It’s also going to take more than 16 days (Atlantic and American Flyers were told to vacate by Oct. 15) for the City to staff up for whatever FBO services it plans to provide. Many people want the City to close the airport immediately, but if the City evicts the FBOs and then offers nothing in the way of aviation services, that’s inviting an order from the FAA to freeze the status quo. If the City can’t go to court and show the judge a credible plan to maintain a reasonable level of aviation services, then there’s no way the City could get the order overturned.

It’s time for a little tai chi. The City should withdraw the eviction notices, as the FAA “strongly” recommends, to slow the FAA’s process down, and concurrently begin developing its plan to provide FBO services. The City can reinstate the eviction notices once it has its services plan ready to implement. One hopes this would forestall FAA direct action against the City during the time that the City is pursuing its Ninth Circuit appeal of the grant assurances case and as it gets ready for next summer’s trial in Federal District Court of the City’s action to confirm the City’s rights to close the airport.

In the good airport news department, Tuesday night the City Council approved concept plans for the expansion of Airport Park onto 12 acres of land that until 2015 were used to park airplanes. The park designers, Rios Clementi Hale Studios, will now proceed to develop detailed plans, with start of construction scheduled for 2018. City staff will now proceed to research funding options. Hint: Vote Yes on the County parks bond, Measure A on the November 8 ballot.