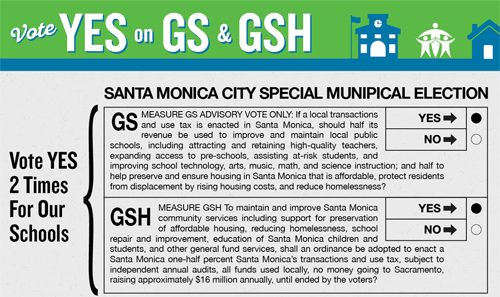 Measure GSH is a half-cent sales tax measure that will provide new revenues to the City of Santa Monica.  Measure GS says these new funds should be shared equally between our local public schools and Santa Monica affordable housing programs. Santa Monica Next urges a yes vote on both measures.

One of the biggest disappointments from the 2014 election was when voters passed a ballot measure dedicating funds from a new tax to affordable housing, but rejected the ballot measure that funded it.

It’s no surprise that there is a local and regional housing crisis, and there has been an outcry for someone, ANYONE, to do something about it. However, state law has tied the city’s hands through legislation such as the Ellis Act. To stem the overall reduction in affordable housing stock, an infusion of public funds is needed. GS and GSH can’t do this on their own, but they represent an improvement over the current state of affairs.

Santa Monica is famous for the high quality of its public schools, and maintaining the highest quality of education for our children is essential, not just for our city’s future, but for the present day. A city that is already perceived as unaffordable for many young, middle-class families must at least provide the highest quality public education.

Taken together, these measures are not the silver bullet that will fix Santa Monica’s problems of affordable housing, public education, or any of the other issues with which we’re traveling. But they are a needed step in the right direction, and it’s a step we need to take.