Home News The Salary Discussion: Let’s Start with the Basics 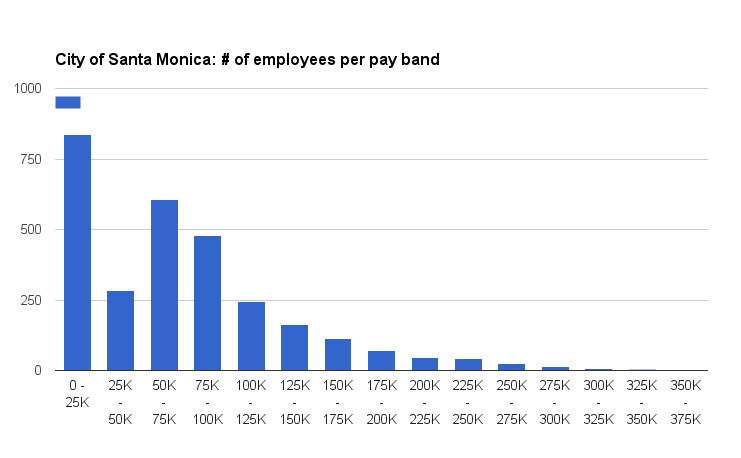 Last week’s report on salaries of the top earners in Santa Monica has struck a nerve and dominated the political discussion in the city post-election. Out two pieces on the story, the first a quick reaction and the second on some data errors and background information on the organization that seemingly pitched the story have been some of our most talked about pieces that weren’t about childcare.

But now that we’ve moved on to a new week, we wanted to move away from just discussing what was wrong with the CBS 2 piece, and move on to discussing the larger issue of wages and salaries for public employees in Santa Monica. As time goes on, we’ll continue to publish data sets, charts and graphs to inform the discussion. Yes, we could wait a couple of weeks and write ONE BIG ARTICLE, but the conversation is going on now, and we want to add to the conversation as it develops.

The above chart was prepared by Juan Matute, based on data presented by the government website Public Pay. As you can see, based on base salaries (no benefits, no taxes) only 479 of 2677 public employees in Santa Monica make $125,000 or over, roughly 18% of the workforce. For comparison, nearly one in three employees make $25,000 or less.

Again, we’re not saying that pay in Santa Monica isn’t high, it is and there are reasons for that including the cost of living, the city’s desire to hire the best employees, and the length of time many employees stay in their jobs in the city: but it is not as high as some of the alarmist news reports would have you believe.

Whether you believe it to be overall too high or not, and how that impacts your advocacy, is not a decision we’re trying to make for you. However, we also don’t want people to make this decisions based on two minute television news stories slanted by cherry-picked data.

PS – We’d also like to thank our new friends from the Nevada Public Research Institute that took the time to comment on our last article using DISQUIS (which makes your email addresses visible). Next time maybe identify yourselves so that people can ask you questions on your work knowing who you are.